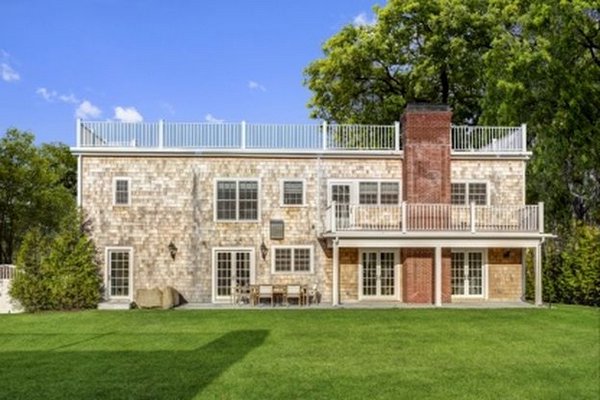 The completion of a long-running renovation of a former inn in Sag Harbor has resulted in a home that just hit the market with an ask of $4.6 million. Goodbye, Otter Pond House, and the property’s new owner will be saying hello to two familiar landmarks on either side, Otter Pond and Mashashimuet Park.

The original building was constructed in 1860 and served several purposes over the decades. Its last commercial incarnation was as the Otter Pond House, a bed and breakfast that was a fixture just off the south entrance to the village. With some nostalgia, one reads on the still-active B&B website that the Otter Pond House offers “spacious and comfortably appointed rooms” and that it was “a convenient 10-minute leisurely stroll to the action on Main Street … but far enough removed to afford a degree of solitude, privacy and relaxation.” Also, one can get “coffee from Sag Harbor’s finest, Java Nation,” which has since moved to Bridgehampton.

The newly renovated private residence looks north at Otter Pond. Back in the day, when winters were winters, the pond was a favorite ice-skating site, when conversations focused more on hot chocolate than climate change. On another side of the dwelling and the Archibald Way subdivision is Mashashimuet Park, which came into being not long after the Otter Pond building did. Perhaps those considering a purchase would be interested in the park’s history, which has hosted generations of Sag Harbor children for myriad activities.

It began in 1874 as the Hamptons Driving Park and Fair Grounds Association, functioning pretty much as the name indicates. Five years later, a half-mile oval track was built for trotting and carriage team and walking races. Not long after, an exhibition building was created for the judging of produce, poultry, flowers and baked goods. Alas, it was destroyed in 1890 in one of the village’s too-frequent fires. Over the ensuing years, the park grounds deteriorated, becoming a bit of an eyesore.

Enter Mrs. Russell Sage. Thanks to her husband’s wealth, and of even more help, his demise, she was able to be a very active philanthropist, especially in Sag Harbor. In 1908, she purchased the property from the Park and Fair Grounds Association and had a house constructed for a park superintendent who would oversee the playground, tennis courts, and athletic field she also created for local families. Two years after she died, in 1918, the Russell Sage Foundation deeded the property to the nonprofit Park and Recreation Association of Sag Harbor, which continues to run the park. By then, it had been named Mashashimuet, an Algonquin word for “place of great springs.” This arrangement exists to today.

If history is not enough for potential buyers of the new house between the park and Otter Pond, it’s worth noting that for $4.6 million one receives in return a 4,700-square-foot home with 6 bedrooms and 6.5 baths, four wood-burning fireplaces, a heated saltwater pool, a pool house, and a covered stone patio, among other features.