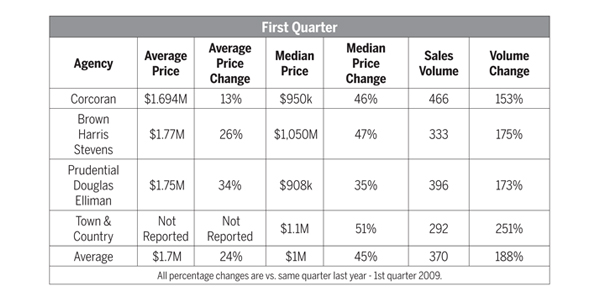 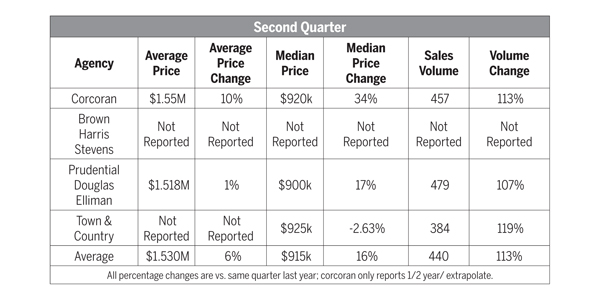 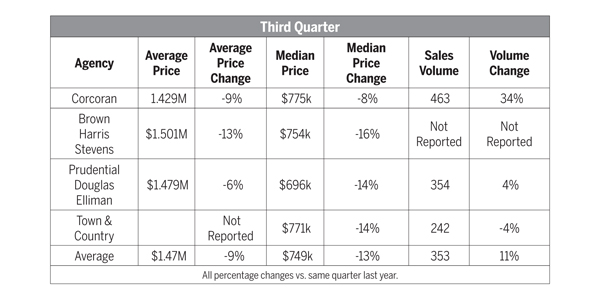 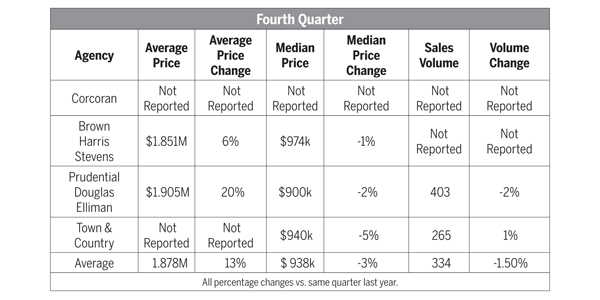 Fourth quarter and year-end market reports issued by brokerages in the Hamptons indicate that the market was healthy and stable throughout 2010.

Sales volume increased steadily throughout the year, though prices were largely flat without trending strongly up or down on a sustained basis. But average prices rose in the fourth quarter as high-end buyers returned to the market in numbers not seen since the crash of 2007. These high-end buyers followed a rush of entry-level buyers who led the way earlier in the year.

As always, the major brokerages (for this analysis, figures from The Corcoran Group, Brown Harris Stevens, Prudential Douglas Elliman and Town & Country were used) define the geography of the Hamptons differently. These geographical definitions account for some of the variation in reported data, which has been averaged for this analysis.

The fourth-quarter reports used for this analysis summarize the state of the market based upon closings that took place between October 1 and December 31 of 2010. There were approximately 334 deed transfers (sales) on the East End of Long Island in the fall of 2010. Volume was essentially the same as the fall of 2009.

Prior to the fall of 2010, volume increased every quarter when compared to the same quarter in the prior year, for six quarters in a row, as the market recovered from almost no volume following the crash. Today’s healthy and sustainable volume levels roughly approximate the average volume levels over the last decade.

Additional signs of market health and stability include total listing inventory and average days on market. Both figures in the fall of 2010 were virtually unchanged from the fall of 2009, as equal numbers of buyers and sellers are now participating in the market.

The listing discount—the difference between the last asking price and the sales price—is also stable at approximately 10 percent, as post-crash values are now widely understood among all market participants in virtually every market sector and neighborhood.

In the third quarter of 2010, the big story was the fact that 67 percent of all sold homes traded for less than $1 million as first time buyers rushed to take advantage of historically low interest rates. But in the fourth quarter of 2010, as high-end buyers returned, the number of houses selling for more than $5 million rose by more than 50 percent compared to the fall of 2009. The total volume of sales over $5 million was the highest in any quarter for the last four years.

Throughout 2010, the sale of vacant land, teardowns and renovation candidates continued to be the strongest sectors of the market.

The volume of land sales in 2010 was up more than 90 percent versus the prior year. These land sales drove the total dollars spent on land in the year up more than 180 percent when compared to 2009.

Owners and builders are making big bets on continued demand for new homes in the best south-of-the-highway neighborhoods. One-acre lots and teardowns in good locations from East Hampton to Southampton priced appropriately in the $2.5- to $4-million range are selling as soon as they become available. But, at this time, there is little or no building activity north of the highway, particularly far north in traditionally year-round neighborhoods.

In the end, the Hamptons market is effectively a derivative of the broader financial markets. As long as Wall Street continues to recover, the Hamptons real estate market will continue apace.

Higher interest rates are coming sooner or later. When they do, they will have a negative impact on the entry-level market, where first-time buyers often use all the leverage available to stretch their finances.

This author concluded last quarter’s report by predicting a rush of high-end buying in spring after Wall Street bonus season and encouraging luxury buyers who were able to act prior to that date to go to contract before their competitors follow. It appears that many high-end buyers were thinking along the same lines and seized the moment to buy in the fall.

For a year-end prediction, expect the four quarters of 2011 to look much like the last quarter of 2010. This author predicts a healthy, balanced market with equal numbers of buyers and sellers and stable volume, lots of low-end inventory (and perhaps declining low-end prices), increased high-end activity (and perhaps increasing high-end prices in select markets) and a gold-rush mentality among those seeking lots and teardowns south of the highway.