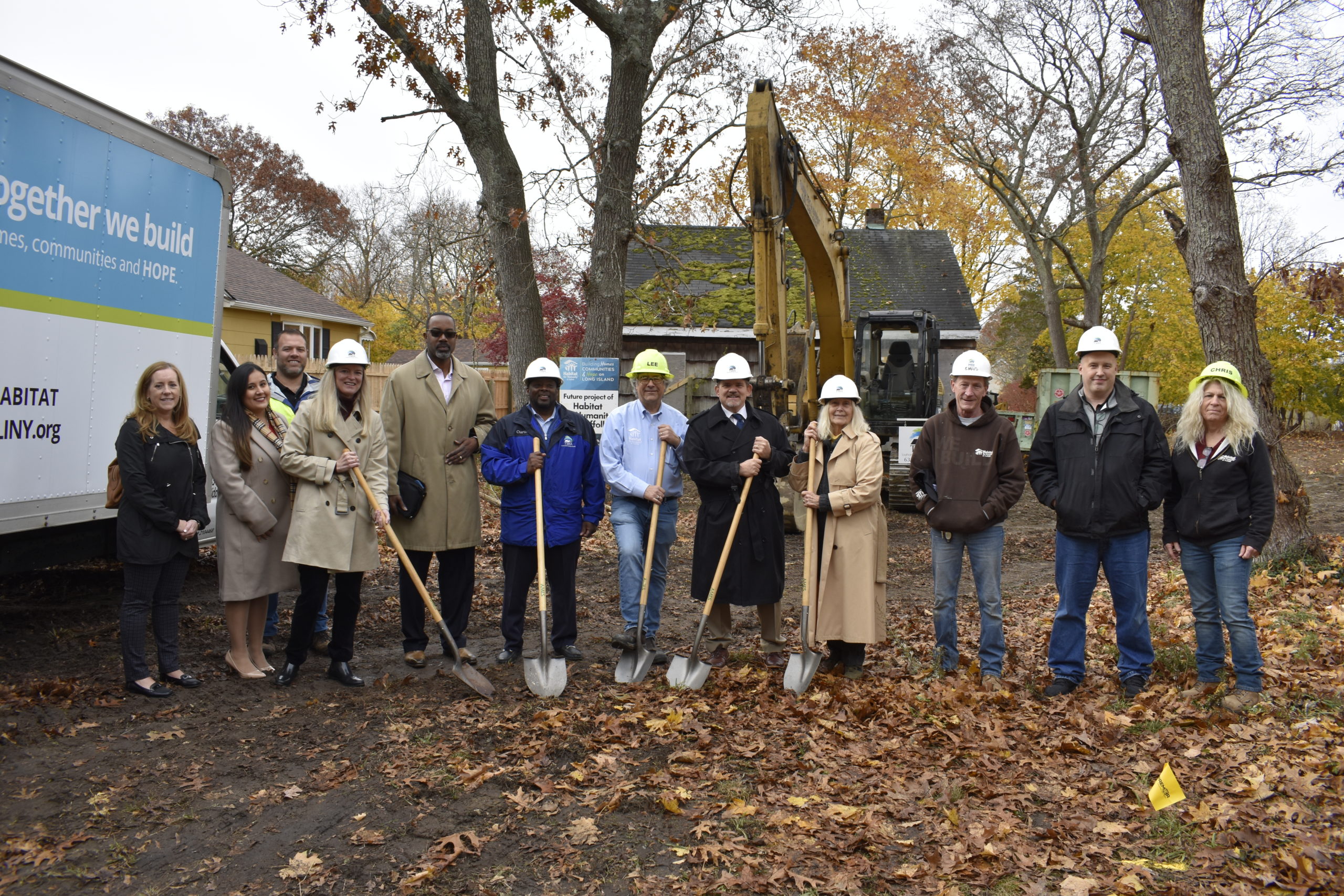 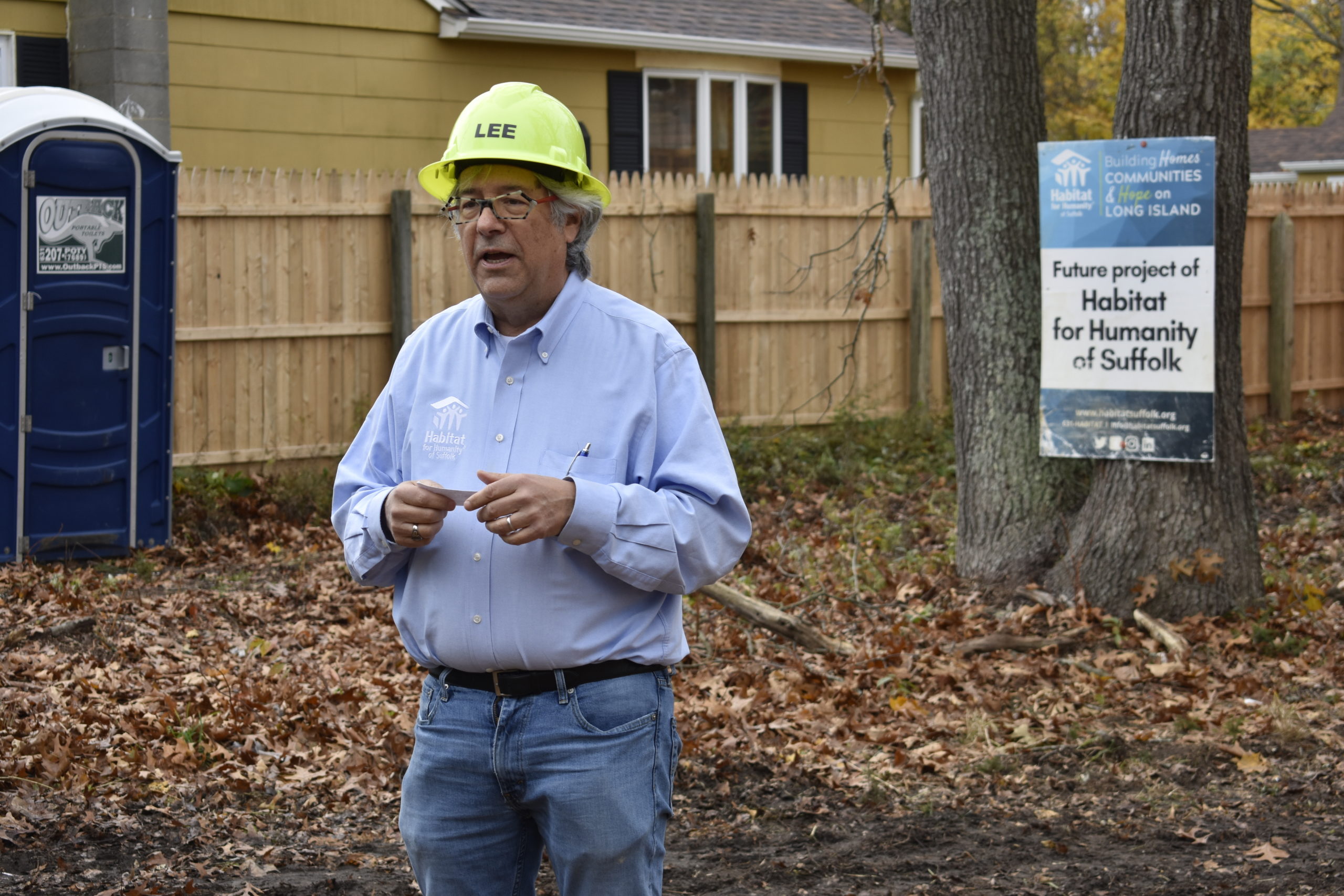 Lee Silberman, the executive director and CEO of Habitat for Humanity of Suffolk. BRENDAN J. O'REILLY 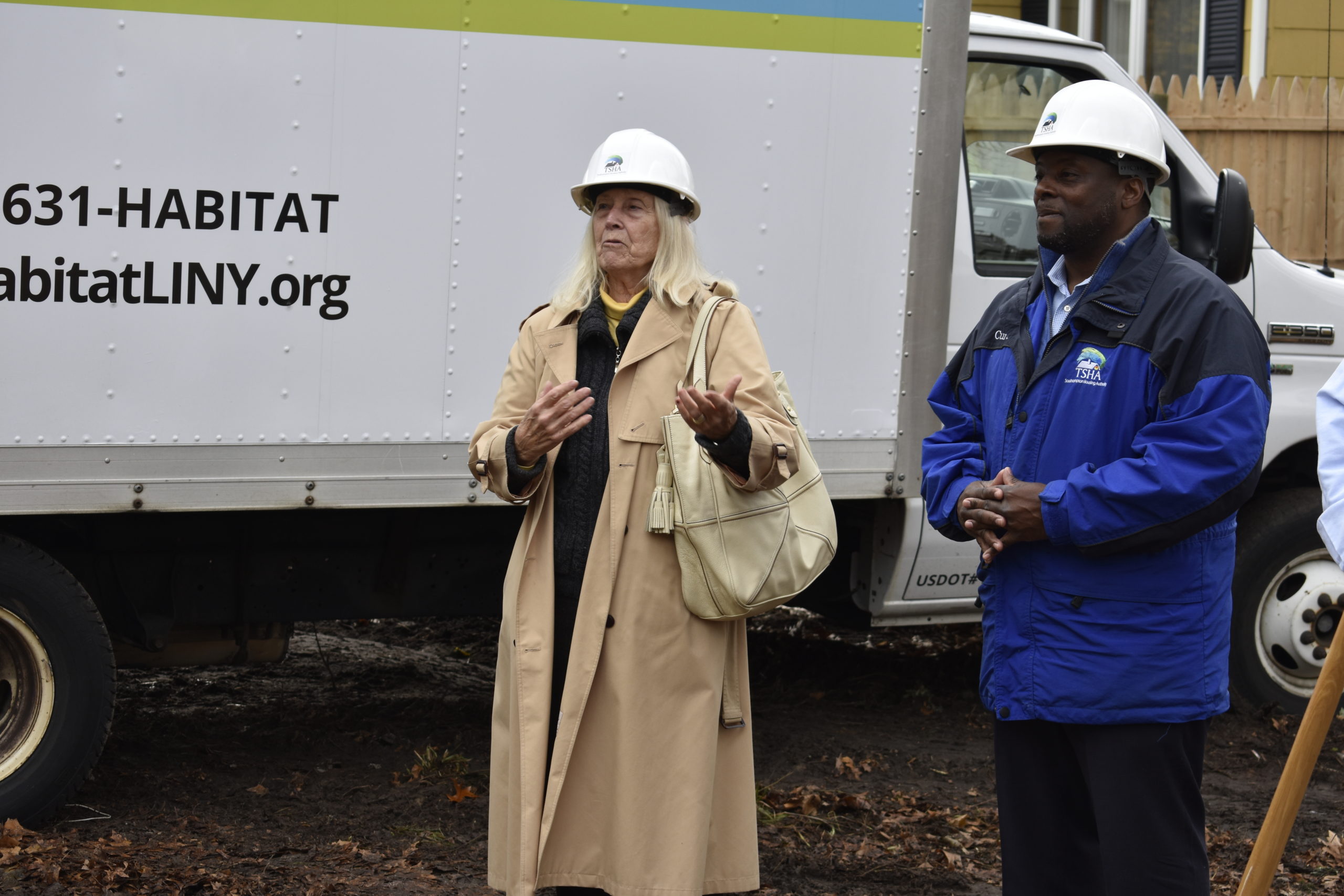 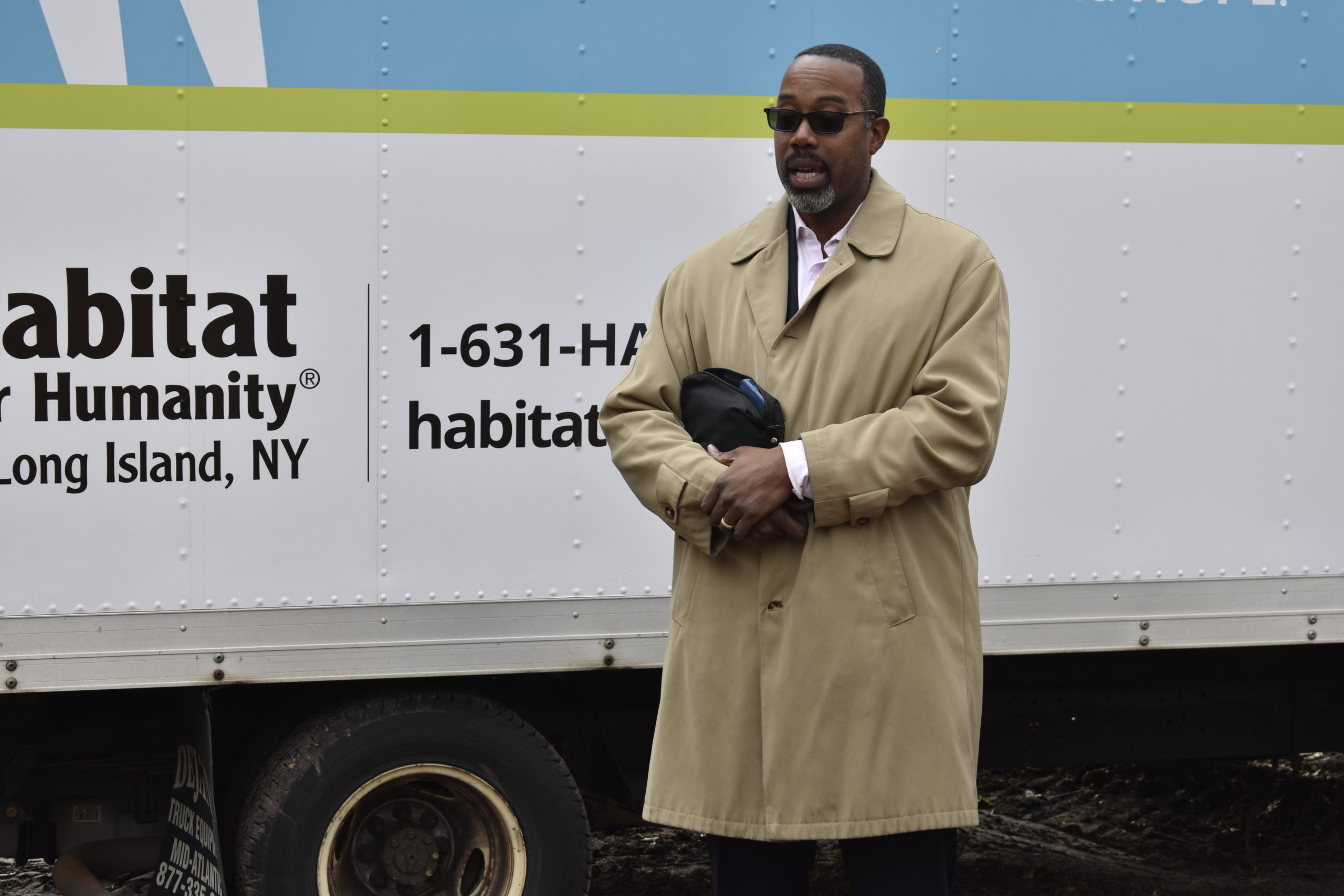 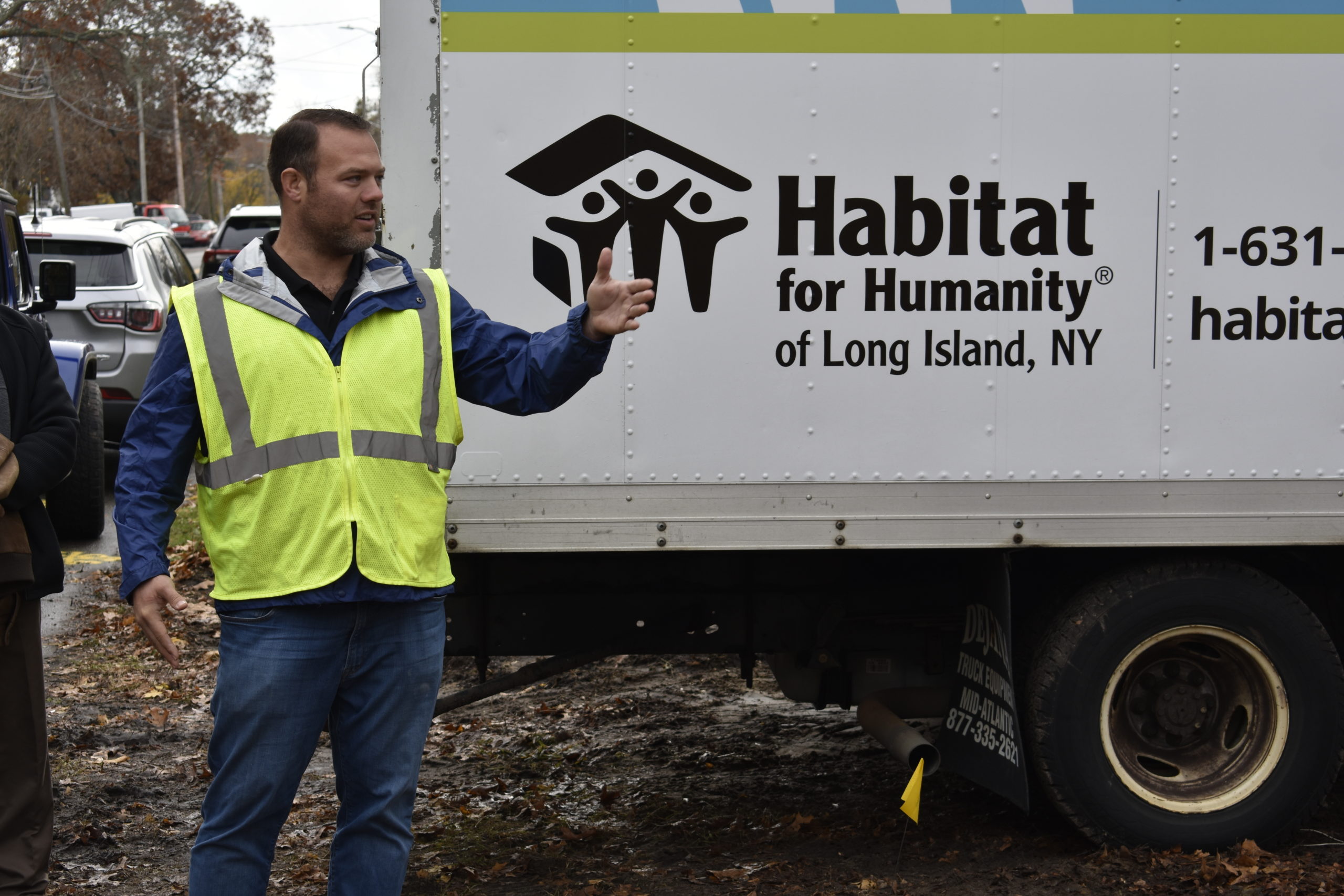 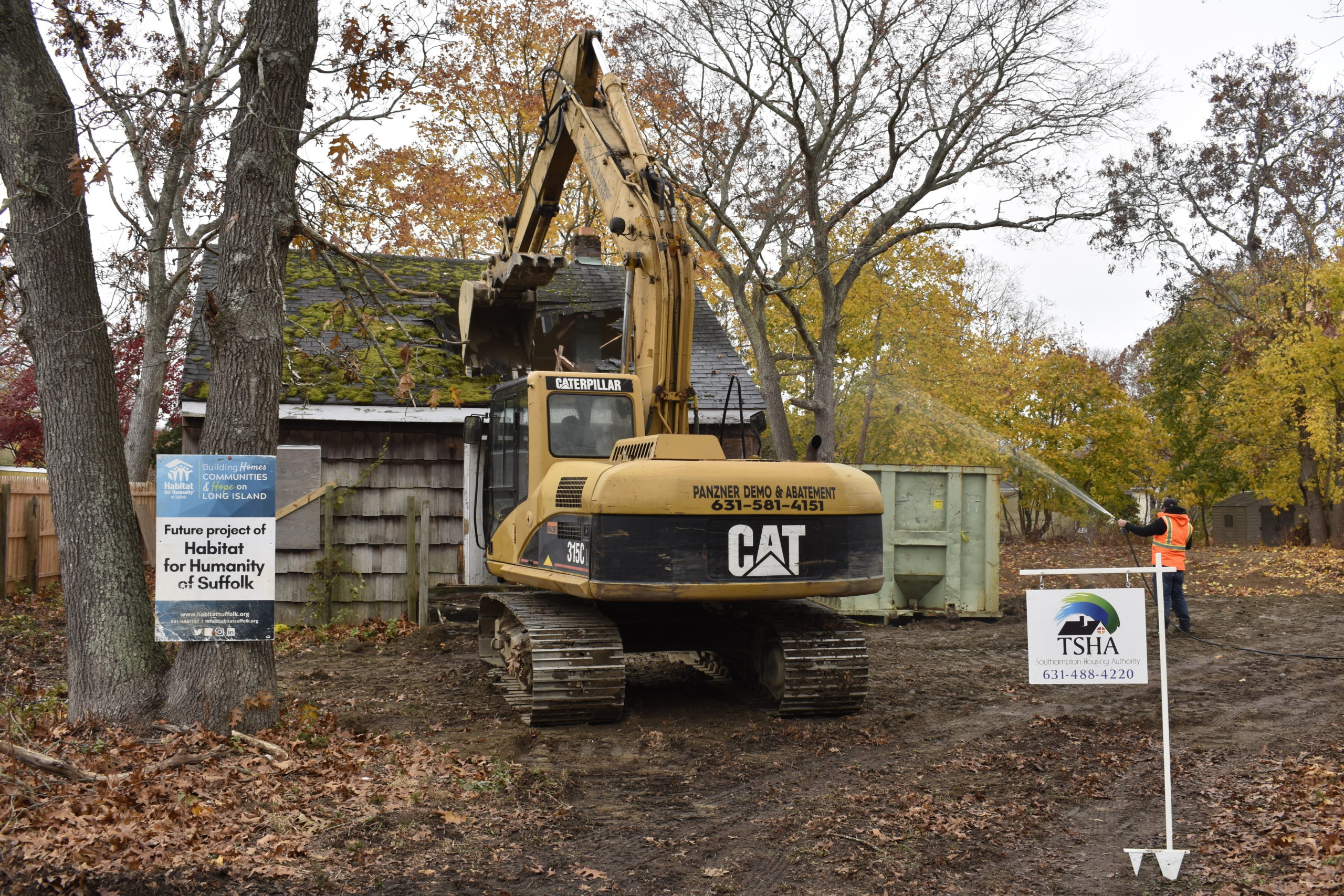 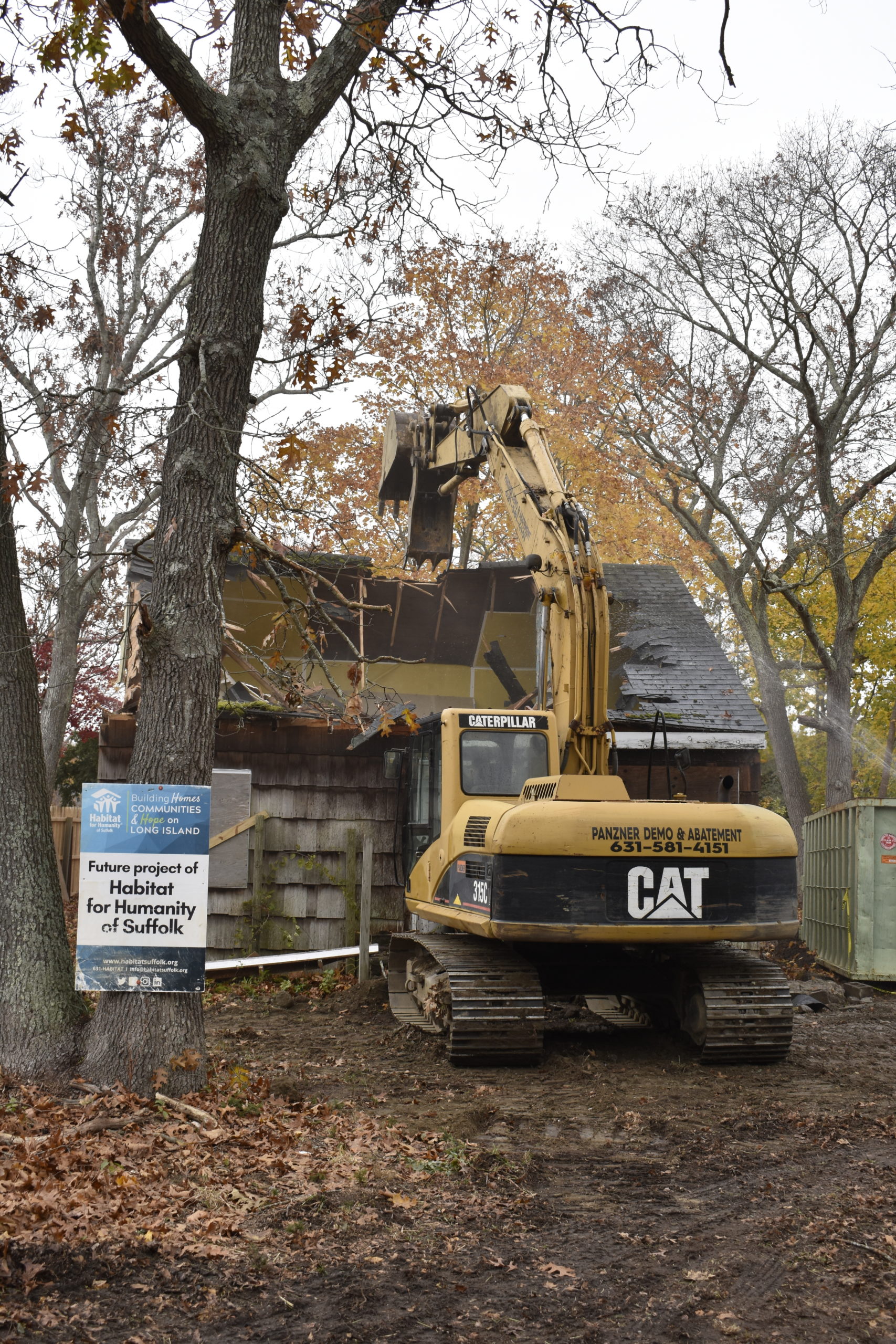 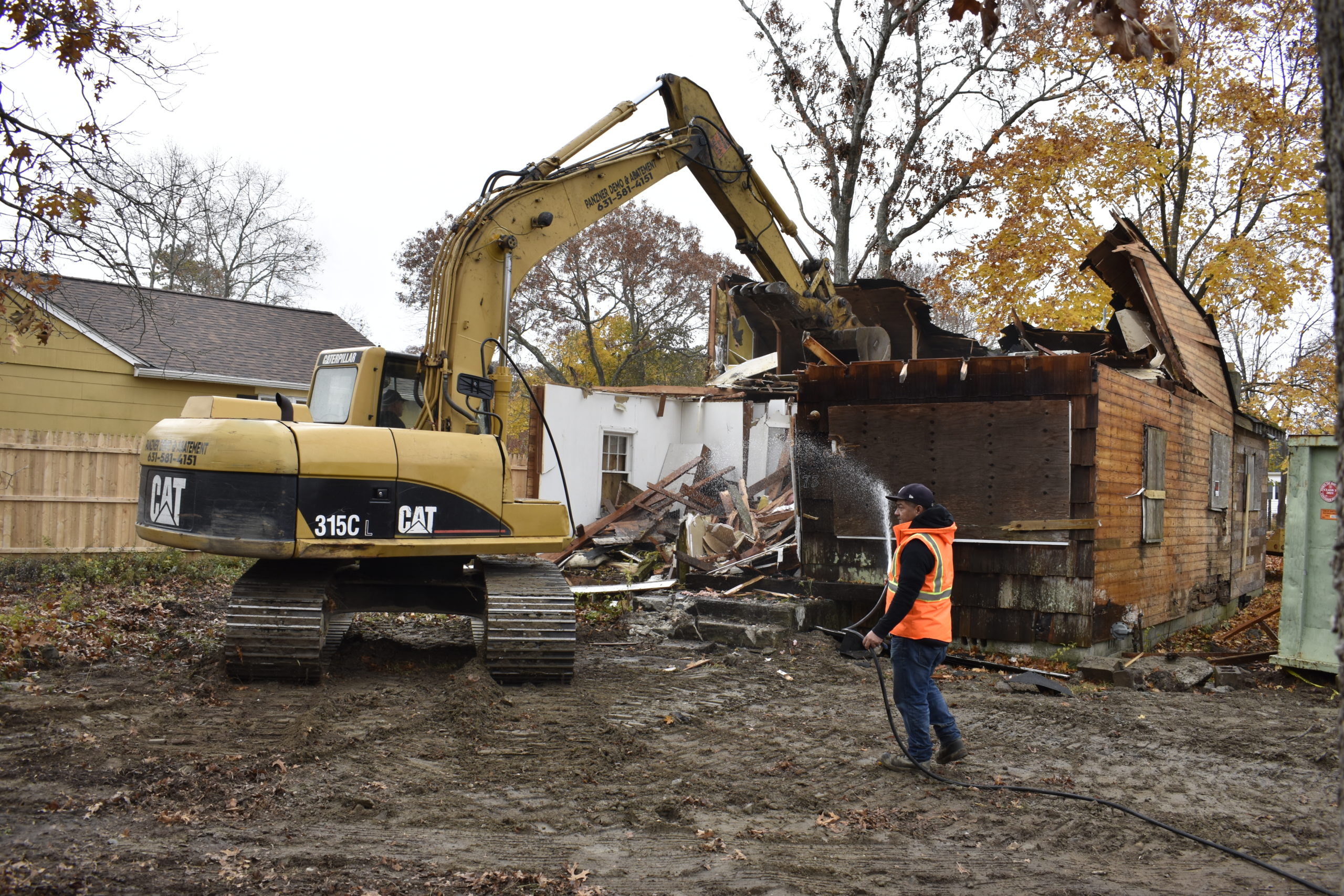 The Southampton Housing Authority and Habitat for Humanity of Suffolk broke ground on November 22 on affordable single-family homes in Riverside that will deliver the American dream to five income-qualified families.

Housing Authority and Habitat officials touted the development as transformative for the block between Old Quogue Road and Vail Avenue. The houses, which are projected to be completed in 18 to 24 months, are being built on five contiguous properties that Southampton Town obtained through Suffolk County‚Äôs 72-H program, which takes land that was seized for delinquent taxes and offers it to municipalities for free to create affordable housing opportunities.

‚ÄúThis has been a long time coming,‚Äù Habitat for Humanity of Suffolk Executive Director and CEO Lee Silberman told a crowd of officials, volunteers and Habitat staff at the groundbreaking. Silberman said he and Southampton Housing Authority Executive Director Curtis Highsmith first spoke about doing a joint development project over lunch in November 2019.

The COVID pandemic made the lengthy process take even longer. But now they could finally celebrate the transition from planning and permitting to the project taking shape.

To make way for the new homes, the one existing house on the five-lot subdivision was razed during the groundbreaking ceremony.

‚ÄúFive homes in one block is truly transformative and will definitely be building a community here, which is phenomenal,‚Äù Silberman said.

The first myth is that former President Jimmy Carter started Habitat for Humanity; Carter is just the most famous Habitat volunteer, he said. The second myth is that, between donated product and the service of volunteers, it doesn‚Äôt cost anything to build a Habitat house. ‚ÄúIn Suffolk County, it costs us approximately $250,000 to build each home that we build,‚Äù he said. ‚ÄúMyth three is that we give the houses away. When these homes are completed, they will be sold at full market value to new homeowners.‚Äù

What makes the houses affordable is that the buyers‚Äô monthly payments for their mortgage, taxes and insurance will be capped at 30 percent of their income.

‚ÄúAs we all know, there is an affordable housing crisis in Suffolk County and all over Long Island,‚Äù Silberman said. ‚ÄúThese will be five homes when complete that will make at least some dent to solve that crisis.

Highsmith said the Riverside project has personal meaning for him. ‚ÄúMy father‚Äôs father lived right down the road here,‚Äù he said. ‚ÄúMy mother‚Äôs mother lived down the road from here on Vail Avenue. Both my mother and father grew up here ‚Äî this is where they met.‚Äù

He said the neighborhood was established as a working class and mostly minority community and is now having a resurgence that this project will help along.

Highsmith said to show that the housing authority and Habitat have a vested interest in the community, the abandoned house that was razed during groundbreaking will be rebuilt in the same style.

Each lot is approximately 0.15 acre. Each home will be 1,700 square feet, with three bedrooms and two bathrooms, sitting on a slab, with a partial basement for mechanicals.

Riverhead Building Supply is sponsoring the construction of one. Southampton architect Ryan Kesner designed all five houses and is working on two other projects the housing authority has planned.

Habitat for Humanity is responsible for overseeing the build ‚Äî including the homebuyers putting in their own hours of ‚Äúsweat equity‚Äù ‚Äî and for vetting applicants, while the housing authority took charge of the permitting process.

Obtaining permits had extra challenges, including proving that the lots were single and separate and properly subdivided. ‚ÄúIt took a lot of legal assistance to get us to a point where we could even have viable lots to build on,‚Äù Highsmith said. The lots are noncompliant, so they also required Zoning Board of Appeals approval, he added.

The housing authority was also awaiting the opportunity to hook the development up to a new sewage treatment plant, which was pitched under the Riverside Rediscovered plan. However, movement on a sewer district has been slow-going.

‚ÄúThat hadn‚Äôt come to fruition,‚Äù Highsmith said of the sewer district, ‚Äúso we had to move forward and complete this process.‚Äù Instead, each of the five houses will have an individual innovative/alternative nitrogen-reducing septic system.

The houses will also be Americans with Disabilities Act adaptable. Highsmith said that means anyone who is mobility impaired can live in these homes without any need to retrofit the houses, and seniors can age in place. One of the two bathrooms in each house is ADA compliant, and the laundry facilities are on the main floor.

Under the 72-H program, the properties will remain as affordable housing through changes in ownership. ‚ÄúWhen it‚Äôs transferred to the town, it‚Äôs also transferred with covenant restrictions tied to the property, so that the only way that these properties can be developed is for the purposes of affordable housing,‚Äù Highsmith explained. ‚ÄúAnd that‚Äôs done in perpetuity. The county ensures that no one‚Äôs making a windfall.‚Äù

How much the homebuyers will pay for the houses is yet to be determined, as rising construction costs during the pandemic make creating affordable housing that much more challenging. Highsmith said the increase in costs ‚Äî more than 30 percent ‚Äî has a tremendous impact.

The 72-H program caps income eligibility at 120 percent of the U.S. Housing and Urban Development-defined area median income. That sets the upper limit at $121,500 for a couple and $151,900 for a family of four.

‚ÄúIt‚Äôs not the last project we‚Äôre going to do in this area,‚Äù Highsmith said. ‚ÄúWe really believe that Riverside is a great opportunity for us to do some wonderful things, and I know that the town‚Äôs still working on how to bring to fruition the Riverside Rediscovered and Riverside revitalization program. So we‚Äôll be working with that as well.‚Äù

Highsmith noted that the Housing Authority has built 20 single-family homes in the last seven years. Also in the pipeline, he said, is a two-family home with an accessory apartment on Powell Avenue in Southampton Village.

North of the village, the housing authority bought 3 acres on North Sea-Mecox Road, where a six-lot subdivision is planned for single-family homes with accessory apartments.