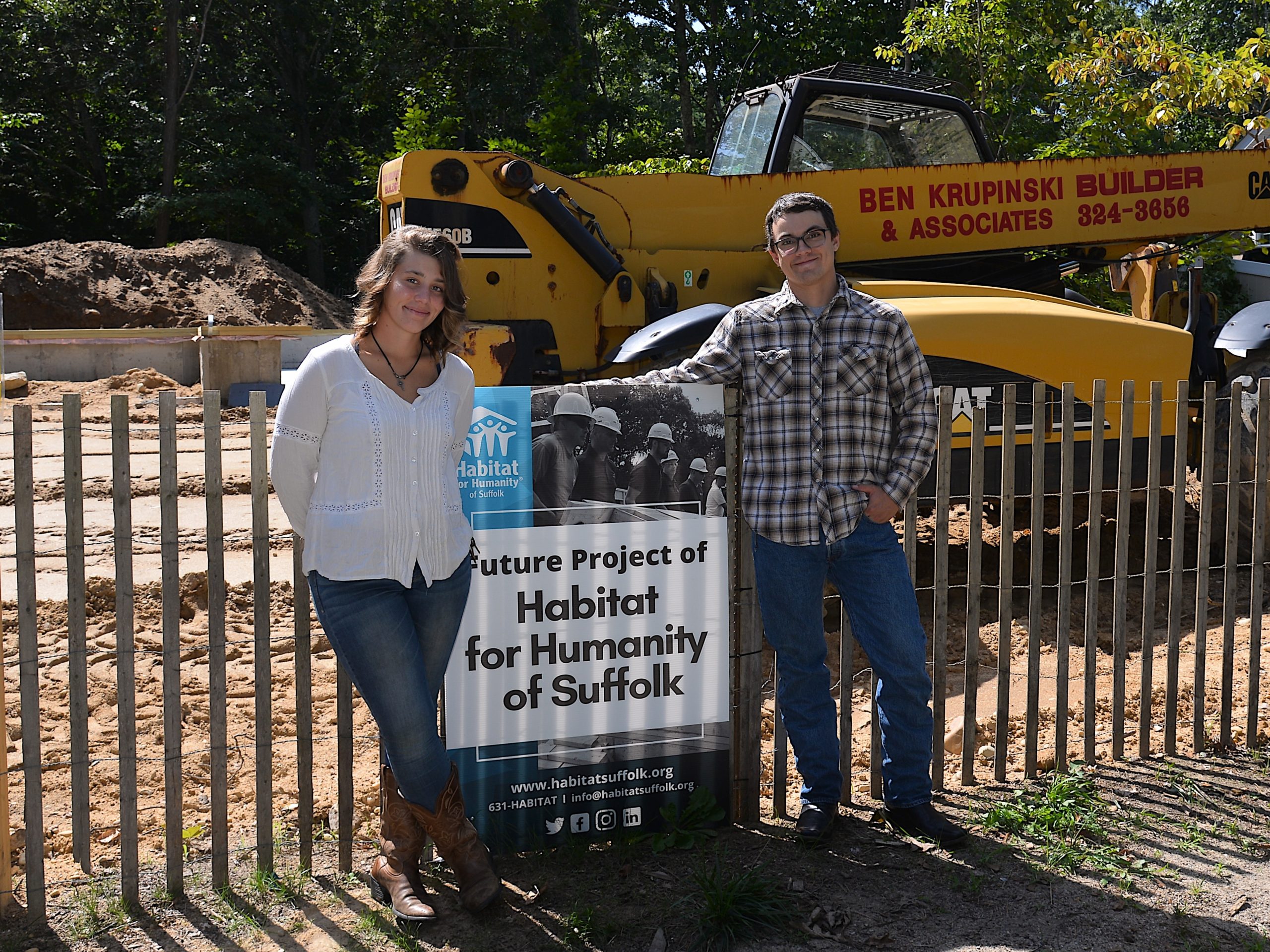 Cheyenne Banville and Anthony LaFountain at the site of their new home. KYRIL BROMLEY 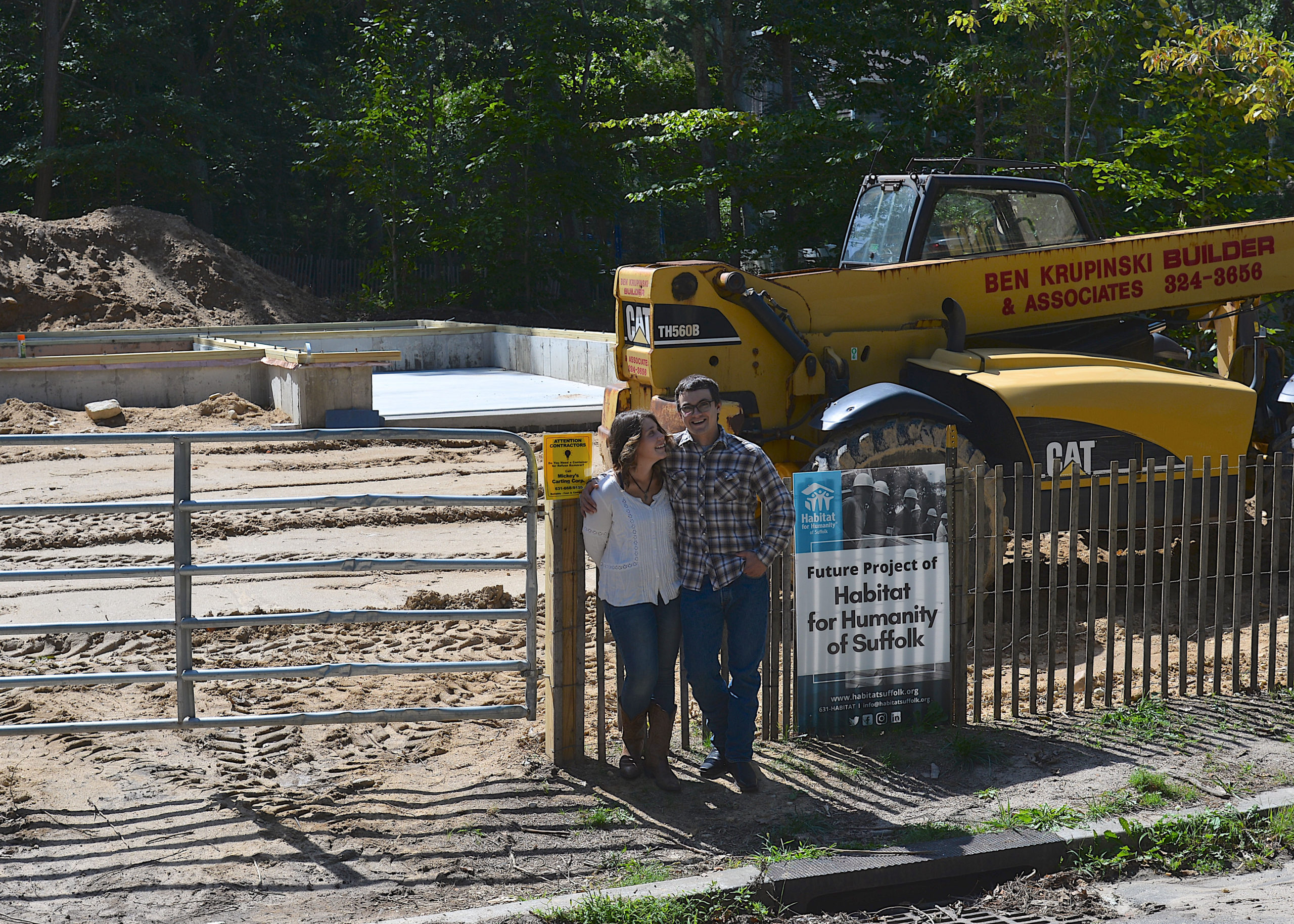 Cheyenne Banville and Anthony LaFountain at the site of their new home. KYRIL BROMLEY

A pair of Springs volunteer first responders will get to stay in the area and continue to serve in the Springs Fire Department thanks to Habitat for Humanity of Suffolk, which will raise the walls next month on a new home for the couple.

Life-long Springs resident Anthony LaFountain, 25, is a firefighter and EMT in the fire department, and his girlfriend, Cheyenne Banville, 21, is an EMT. They said this week that if they had not been awarded the opportunity from Habitat for Humanity, they likely would have had to move out of the area and, regretfully, leave the fire department as well.

About 30 Long Island business executives will raise the walls on Monday, October 5, for Habitat for Humanity of Suffolk’s annual “CEO Build.” This project will also be the nonprofit’s annual “Blitz Build,” which means after the walls go up, the project will be completely finished within three weeks. Ben Krupinski Builder of East Hampton will see through the build to completion, and Mr. LaFountain and Ms. Banville could be moving in as soon as the first week of November.

“We sell the houses, and we sell them at full market value,” Mr. Silberman said. “So the couple that’s getting the house will get a mortgage through SONYMA [State of New York Mortgage Agency]. SONYMA has a special program for Habitat affiliates. It will be a 30-year, 2 percent mortgage and essentially a zero down payment.”

Homeownership is one of the primary sources of wealth development, he noted, and Habitat Suffolk offers the possibility of generational net worth growth, he said.

“If they stay in the house for 30 years, they’ve made all their mortgage payments, they own the house free and clear,” he said. “And then when they sell it, the money is theirs.”

In order to qualify, applicants must have a household income between 40 and 80 percent of the area median income — that’s no more than $79,400 annually for a couple — they must have a demonstrated housing need and must have the “ability to partner.” Mr. Silberman explained that partnering with Habitat Suffolk includes putting in 300 hours of “sweat equity,” including helping to build Habitat homes. They are also required to take a first-time homebuyer class, and classes on financial fitness and how to perform basic home repairs themselves.

Mr. LaFountain said he and Ms. Banville are currently renting a small cottage apartment near the Springs Firehouse that fellow department members helped them find.

“It was a Godsend that we did get the apartment, but it’s expensive renting, and after renting you don’t really have anything to show for it,” Mr. LaFountain said.

He is a mechanic for the Town of East Hampton, and Ms. Banville works for a garden center that serves East End landscaping businesses. She is originally from Massachusetts and moved to Springs two years ago to be with Mr. LaFountain after they met through online dating and clicked. Ms. Banville also followed him into the fire department and opted to become an EMT because the department has a shortage.

Mr. LaFountain said he learned of the Habitat for Humanity opportunity at a presentation geared toward fire department volunteers. After months of delay due to the COVID-19 pandemic, he and Ms. Banville learned in July that they had been chosen for the Springs house.

“I was really surprised,” Mr. LaFountain recalled. “I was ecstatic, excited, kind of speechless at the time. I was really happy that I’m able to stay in my hometown. That was a big bummer for me — that I wasn’t able to stay in my hometown and stay in the Springs Fire Department. I was probably going to move out of here because it’s expensive to live out here, being the age that we are, trying to save money.”

They could never save enough money while renting to make a down payment on a house, he added.

They have been taking the required classes online and have been giving hours on Saturdays to help build Habitat Suffolk houses to the west. Mr. LaFountain explained that they won’t be working on their own future house because of insurance concerns while Ben Krupinski Builder leads that project.

Ms. Banville said they love working on the houses because they can help give others the opportunity to stay in their communities. “There’s nothing like it,” she said, and they intend to continue volunteering for Habitat Suffolk even after their 300 sweat equity hours are complete.

Ray Harden, a principal of Ben Krupinski Builder, said he learned of Habitat Suffolk’s plans for a house in Springs through the East Hampton Fire Department, where he is a volunteer and ex-chief, and offered to have his firm take it on.

“We’re so glad that it’s going to a couple of people that are in the fire department-EMS,” Mr. Harden said.

Plumbers, electricians and other subcontractors that regularly work with Ben Krupinski Builder are also donating time to help out, and Mr. Harden reported that even more people are approaching him to offer to lend a hand.

“The word is getting out there and I’m being stopped on the street, saying, ‘Hey, if you need some help, please let me know and I’ll come down for a day,’” he said.

James Quackenbush of Quackenbush Cesspools donated a nitrogen-reducing septic system, East End Excavating dug the hole for the septic installation for free, Chris Hatch excavated for the house itself for free, Breeze concrete put in the foundation for a discounted rate and Greenergy Homes donated the foundation waterproofing.

On the wall-raising day, Ben Krupinski Builder workers will help the CEOs along.

“Once they’re done, we’ll take over,” Mr. Harden said. “We have to really be moving because we only have three weeks from that day to finish it up.”

“We never back down from a challenge,” Mr. Harden said. “Have we ever done something like this? No, but we’ve taken on the challenge.”

Mr. Silberman said this is the first house built from the ground up on the East End under the umbrella of Habitat Suffolk.

In 2017, the nonprofit rehabilitated an East Quogue home, but the couple who were to receive the house backed out due to personal reasons, Mr. Silberman said. Habitat Suffolk wasn’t able to find new qualifying applicants so the decision was made to sell the house at market value and use the proceeds for a new repair program to help needy homeowners with home maintenance plus to build new homes on six adjoining parcels in the Riverside-Flanders area in partnership with the Town of Southampton Housing Authority. The town owns the parcels, four of which are vacant, one of which has a house on it that will be demolished and one that has a foundation on it that will be removed, he said.