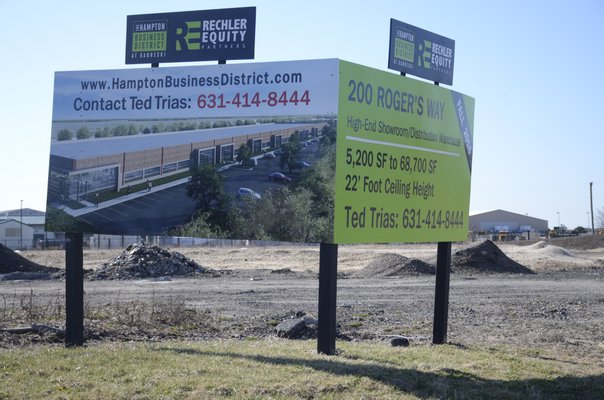 The Southampton Town Planning Board has approved plans permitting the construction of a 67,000-square-foot warehouse at Francis S. Gabreski Airport in Westhampton, the next phase of the Hamptons Business District.

Work on the $14 million building is expected to begin in the late spring and should be finished in the first quarter of 2017, according to Mitchell Rechler, co-owner of Plainview-based Rechler Equity Partners, the developer behind the airport’s business district.

The structure, which will be sited on the south side of the 55-acre business park, will be located at 200 Rogers Way. The single-story building will be 22 feet high and primarily marketed as warehouse or showroom space, though some of it could also be leased as office space, Mr. Rechler said.

The developer noted that his company has been in talks with several business owners who are interested in leasing some of the new space, though he declined to share the names of the potential tenants. He would say only that there is growing demand for space at the business park, noting that 50,600 square feet of the complex’s first 60,000-square-foot building, which opened in early 2015, now boasts three tenants.

The 67,000-square-foot building is the second of 10 buildings that will eventually make up the business park, which is still supposed to be anchored by a three-story, 145-room hotel. The first building was completed last year and is now occupied by AC Lighting & Electric, Carrier Enterprise Northeast—a heating, air conditioning and ventilation company—and Tate’s Bake Shop, which is known for its cakes, brownies, pies and, most notably, its chocolate chip cookies. The others will eventually include four additional office buildings, an industrial building, a restaurant or bank, and a day care facility.

In 2009, the Rechlers inked a 40-year lease with Suffolk County, which owns the Westhampton airport, once the Southampton Town Board finalized plans for the planned development district, or PDD, special zoning that allows developers to deviate from the town’s zoning restrictions. The PDD was originally pitched as a means of attracting high-tech businesses, though, in more recent years, the Rechlers have refocused their efforts on leasing space to other businesses.

The developers are expected to pay about $38 million in rent to Suffolk County for the 55 acres over the course of their lease.

“We’re excited to continue to move forward on the Hamptons Business District, and we were thrilled with the velocity of demand with the first building,” Mr. Rechler said.