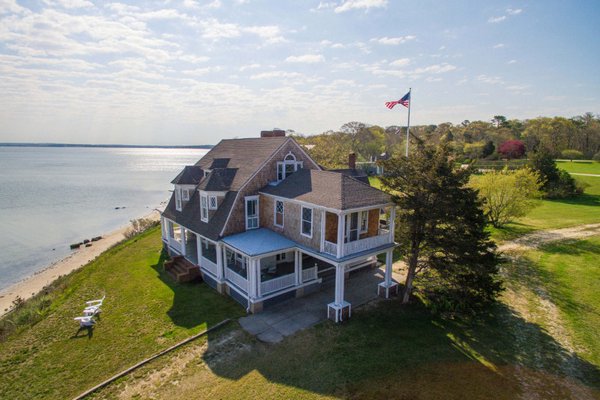 Shorebluff, in Hampton Bays, was used in a couple Hollywood movies, and just recently went on the market.

One of the appealing characteristics of the Hampton Bays estate named Shorebluff, according to Douglas Elliman Real Estate, is that it has appeared in at least two films, “The Forgotten,” with Julianne Moore and Dominic West (both of whom are Montauk regulars), and “Margot at the Wedding,” starring Nicole Kidman and Jennifer Jason Leigh. But this overlooks the connection to Horatio Southgate.

We’ll get to Bishop Southgate in a moment. First, the property: Shorebluff, on Newtown Road just west of the Shinnecock Canal, was constructed in 1897. The landmark property covers almost 9 acres, which includes 225 feet of shoreline on Peconic Bay. The estate is comprised of three structures, one of which is the main house. Few properties in the Town of Southampton can equal the views that Shorebluff offers. The estate has recently come on the market, and the asking price is about $5 million. Compare that to the $2,700 it cost to build 119 years ago, which was paid by Sarah Southgate.

Now we have to back up a bit to the good bishop. Horatio Southgate was born in Portland, Maine, in July 1812. At 22, he was ordained a deacon of Trinity Church in Boston. Then it was time to see the world. Having been appointed commissioner of foreign missions in the Episcopal Church, in 1839, he set sail from New York. Rev. Southgate’s journey was intended, according to an article in the New York Times, to “investigate Mohammedanism in Turkey and Persia.” He made his way to Constantinople and “had the distinction of being the first missionary ever appointed to the realm of the Sublime Porte.”

In St. Peter’s Church in Philadelphia in 1844, Southgate was consecrated a bishop and returned to Turkey, also touring and spreading the Episcopal word in what are now Iran and Iraq. Along the way, he married, but his wife died in 1850. The tragedy brought him back to the United States, where he served as rector at churches in Portland, Boston, and New York. In 1864, he married again, in New York, to Sarah Hutchinson. Between his two wives, the busy bishop sired 13 children.

Southgate’s last posting was as the head of St. Thomas Church in Ravenswood, Queens. It was there he died in 1894, of complications associated with the typhoid malaria he had contracted during his travels. His papers can be found at the Yale University Library and at the University of Virginia. Three years after Southgate’s demise, his widow took the $2,700 out of the bank and headed east to Hampton Bays to build Shorebluff.