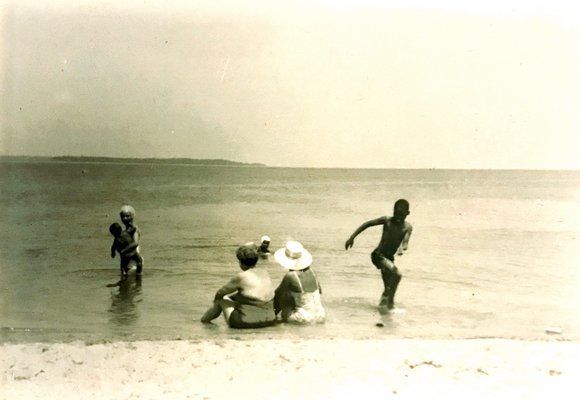 Family on the beach in Sag Harbor circa 1959. COURTESY DONNAMARIE BARNES ARCHIVE 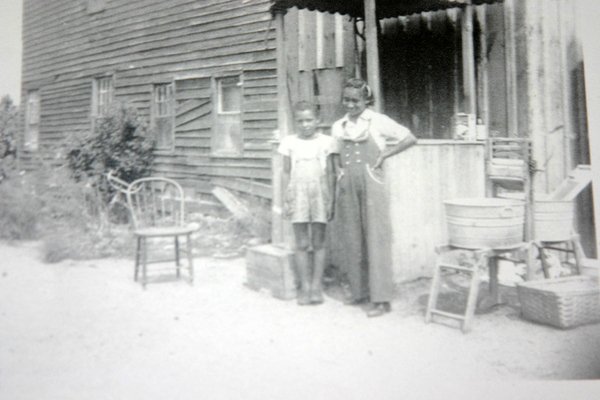 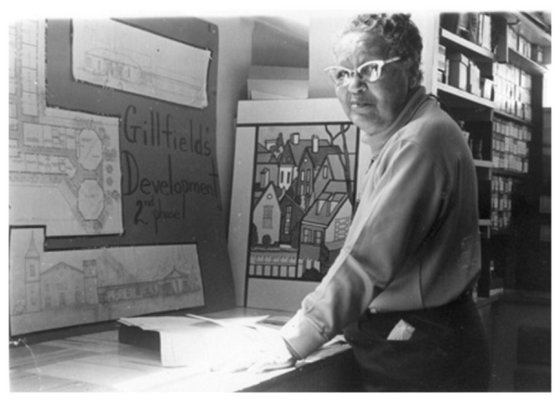 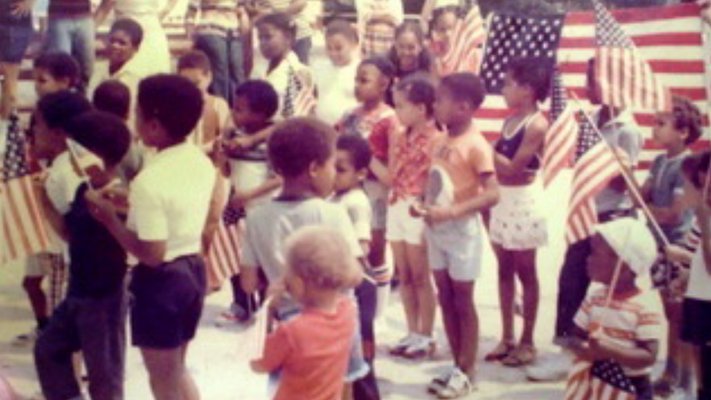 Edward Dudley and his friends would walk from their cottages down dirt roads and hitchhike to the movie theater in Sag Harbor Village as kids during the summer months in Sag Harbor Hills. They’d also play stickball and two-hand touch football in the streets, or just relax on the private beach.

“We had one of the only pools, and all of the kids learned how to swim in my pool. My mom invited everyone over,” Mr. Dudley recalled on a recent Friday afternoon at his Hillside Drive home, which his family has expanded over the years since his father purchased it in the 1950s as a quaint two-bedroom cottage.

“Everybody was my aunt and uncle when I grew up. You never had to knock—if you were hungry, the neighbors fed you. It was a wonderful time growing up.”

In the 1940s and 1950s, subdivisions in Sag Harbor Hills, Azurest and Ninevah, collectively known as SANS, became a summer home destination for upper- and middle-class African-Americans, many of them doctors, lawyers and dentists—Mr. Dudley’s father, Edward Dudley Sr., was a New York State Supreme Court justice and the first African-American appointed to serve as a U.S. ambassador. When Jim Crow laws left few recreational options for African-Americans, the founding residents created these unique communities on underdeveloped land at the outskirts of Sag Harbor Village, which to this day have more than 300 houses. The summer houses gave black Americans a place of their own.

“The idea of an African-American summer community on the water spread like wildfire,” Mr. Dudley said. “It was an unbelievable community. You couldn’t have had a better lifestyle.”

SANS has been besieged by redevelopment in recent years, but about 20 of the original families still maintain homes there today. Mr. Dudley said developers have been trying to buy out the elderly residents in particular.

“Before we knew it, 20 properties were turned into these mansions,” he said. “A lot of us are still here. We’d like to keep it a middle-class-type neighborhood.”

To help maintain its character, the community will be considered for a spot on the New York State Register of Historic Places at a March 21 meeting of the State Board for Historic Preservation. Such a designation would recognize the area’s historical significance and potentially make SANS eligible for preservation funding from the state.

The SANS historic landmarking journey was foreshadowed in 1994 when Sag Harbor Village underwent studies to become a part of the National Register of Historic Places. The Sag Harbor Village Historic District was added to the national and state registers of historic places in 1994. At the time, the histories of Sag Harbor Hills, Azurest and Ninevah Beach were noted, but the residences were considered too new for inclusion.

“The post-World War II resort communities of Azurest and Ninevah lie east of Havens Beach,” said one document. “The houses are not 50 years old and they do not fit in with Sag Harbor’s period of significance, but they deserve future study as early resort communities built for African-Americans.”

Last summer, however, the State Historic Preservation Office said the neighborhood would be eligible for national and state historic district designation. Since then, Renee Simons, a Sag Harbor Hills resident and leader of the SANS Steering Committee, has been rallying residents together to advance the landmarking process, and in February, Jennifer Betsworth, a historic preservation specialist with the State Office of Parks, Recreation and Historic Preservation, led an informational meeting at the John Jermain Library in Sag Harbor.

“Historic preservation isn’t about freezing something in the past—it’s about celebrating the uniqueness of communities and using historic buildings as the foundation for the future and to manage change,” she said at the time. “I like to think of our historic buildings as nonrenewable resources. They’re a part of the fabric of our community. And once they’re gone, they’re gone.”

A study conducted by the State Office of Parks and Recreation showed that two African-American sisters, Maude Terry and Amaza Lee Meredith, were largely responsible for the creation of Azurest. Maude Terry, who vacationed at a rented cottage in Sag Harbor’s Eastville neighborhood, envisioned a new private summer community designed for black families on an undeveloped 20-acre parcel between Hampton Street and Gardiners Bay. Ms. Terry reached out to the property’s owner and they agreed on a plan to subdivide the parcel in partnership. Their descendants, members of the Richards family, still live in what many say may be the first home constructed in Azurest, the Terry Cottage.

Remembering his youthful days in Sag Harbor Hills, Mr. Dudley also recalled extravagant parties where caterers would serve grits and ham, and bloody marys for the adults. His father moored a boat with a friend out in the harbor, and they’d take it out to catch bluefish and porgies and sometimes go water skiing. Mr. Dudley also remembered watching his parents and their friends play bridge at their cottage, and he remembered playing tennis with his father at the Noyac Golf and Country Club.

Now 82 and living full-time in Sag Harbor since 2004, William Pickens III met his wife of more than 50 years, Patricia, while summering in Sag Harbor. Mr. Pickens said his family never missed a summer in Sag Harbor, even during the Great Depression and World War II. The Pickens family has roots in Sag Harbor dating back to 1908 and to his great-aunt’s house on Hempstead Street. His daughter, Pamela Alison Pickens, currently lives in the original family home in Sag Harbor Hills, which was built in the 1950s. Langston Hughes, the famous African-American poet and activist, was Mr. Pickens’s father’s roommate in college, and also one of many famous African-Americans, including Duke Ellington and his sister, Ruth Ellington Boatwright, who visited Sag Harbor. Other luminaries included Lena Horne, Harry Belafonte and Roscoe C. Brown Jr., a decorated Tuskegee Airmen pilot.

“My dad was a lawyer and liked to come out to go boating and fishing,” Mr. Pickens said. “Ed’s father and mine were friends when they were kids,” he said, referring to Mr. Dudley. Mr. Pickens explained that the Dudley and Pickens families have been friends since the 1920s.

“It was all family friends who heard by word of mouth. There was no television or internet,” he said.

“It was a wonderful place for children. You could go through anybody’s house because we all knew each other,” Mr. Pickens said. “There were no fences or big trees. It was very informal. We didn’t want any barriers.

“I love Sag Harbor and I’m dedicated to it,” he continued. “It’s in my blood and I hope to preserve it and pass it on to the next generation.”