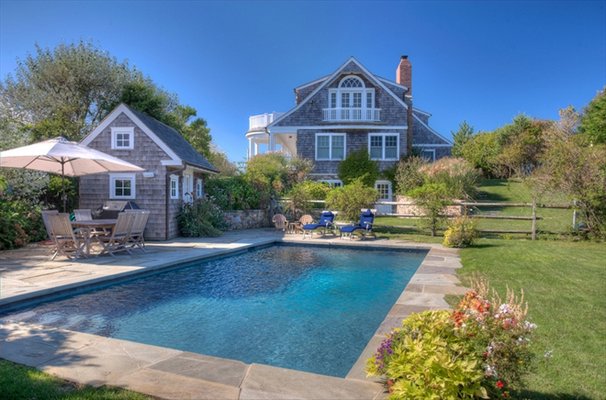 That didn’t take long at all: Only a few months after their house in Amagansett was sold, Naomi Watts and Liev Schreiber have found new digs in the Hamptons, this time on Surfside Avenue in Montauk. The purchase price was $5.4 million.

The two award-winning actors and their two children had lived for several years in the Amagansett Lanes section, on two-thirds of an acre in a 6,100-square-foot house with 6 bedrooms and 7.5 baths, and of course there was a pool. Their new 3,500-square-foot Montauk manse is on a half-acre and has 4 bedrooms and 4 baths, formal dining room, large gourmet kitchen, and a media room in case the couple wants to watch a DVD of “Mulholland Drive” or, on Sunday nights, “Ray Donovan” on Showtime. There is a heated pool, with a pool/guest house, or the family can stroll to the ocean.

Finding time to spend at their Montauk retreat could pose a challenge for Ms. Watts, a two-time Oscar nominee, and Mr. Schreiber, who appear to be in continuous demand. She has been shooting the feature film “The Glass Castle,” due for release next year. Already set for showing are two small-screen projects, “The Divergent Series” and the return of “Twin Peaks,” which reunites Ms. Watts with the director David Lynch.

Her husband has been no less occupied in front of cameras. His two highest-profile feature film roles in recent years have been as Lyndon Johnson in “Lee Daniels’ The Butler,” the Russian chess master Boris Spassky opposite Tobey Maguire as Bobby Fischer in “Pawn Sacrifice,” and as the editor Marty Baron of The Boston Globe in “Spotlight,” which last February received the Academy Award for Best Picture. Many viewers are seeing him right now on “Ray Donovan,” in its fourth season. His next feature, due out next year, is “Goon: Last of the Enforcers,” and his voice will be heard in the animated version of “My Little Pony.”

One way for Ms. Watts and Mr. Schreiber to be together was to make a movie with each other. Due to hit the festival circuit this fall—which could include the Hamptons International Film Festival—is “The Bleeder.” The couple’s co-stars include Ron Perlman, Elizabeth Moss, and Jim Gaffigan.

Mr. Schreiber plays Chuck Wepner, the heavyweight boxer from New Jersey nicknamed the “Bayonne Bleeder” for the buckets of blood he spewed during his bouts in the 1970s. His most famous fight was in March 1975, when Mr. Wepner lasted into the 15th round against Muhammed Ali before being knocked out. (Reportedly, Mr. Wepner was the model for Rocky Balboa.) In the film, Ali is played by Pooch Hall, who plays Ray Donovan’s half-brother in the Showtime series. Another tidbit of local interest in “The Bleeder” is the actor Ivan Martin plays Bobby Van.

Wouldn’t the Bridgehampton eatery be a perfect venue for a film premiere party?