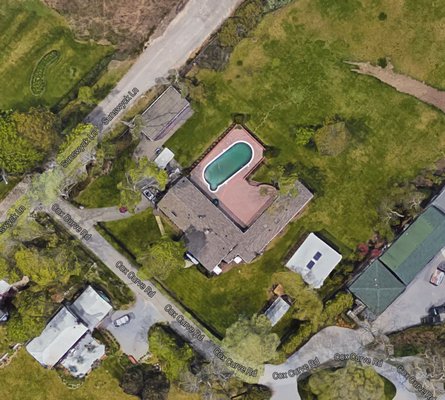 The Cox home on Sunswyck Lane in Westhampton Beach

Every so often there is a remembrance piece about Richard Nixon’s stay in Montauk. But what about the Village of Westhampton Beach? OK, OK, we’re stretching here, but we can report that there is indeed a connection to the former president and a property in the village that just sold for $4 million. Actually, two connections.

The house on Sunswyck Lane is a shade under 3,000 square feet and is 31 years old. It contains 5 bedrooms and 5 baths and sits on a generous 1.37 acres, with the ocean a stone’s throw to the south (of course). But enough about that—what is the connection to the 37th president of the United States?

The new owner is Howard E. Cox Jr. The Coxes have been a rather distinguished family. Howard Cox Sr., who died at 76 in 1989, was the son of a banker in Carthage, Illinois. That was the good news … the bad news is the bank went belly up in the Depression and the senior Mr. Cox found out what it was like to pay for college.

After graduating, he went to both Harvard Law School and Harvard Business School. Being academically inclined did not keep him from military service. During World War II, Mr. Cox saw action as a member of the Army Air Corps in North Africa, Europe, and the Pacific Theater. Because of his final rank, he was thereafter known as Colonel Cox.

In 1946, he founded the law firm of Cox, Treanor & Shaughnessy in Manhattan. Three years later, he married Anne Finch, a descendant of one of the top Revolutionary War activists. They had two sons, Howard Jr. and Edward Cox. The younger Howard Cox also served in the U.S. Army and went to Harvard Business School, as well as Princeton University and Columbia Law School. He worked for the Secretary of Defense during the Nixon Administration (there’s one connection!), then joined the firm of Greylock Partners, where he is now a partner emeritus.

That other connection? His brother, Edward, married Tricia Nixon, one of the two daughters of Richard and Pat Nixon.

Okay, maybe not an awesome reveal, but better than a connection to Spiro Agnew.