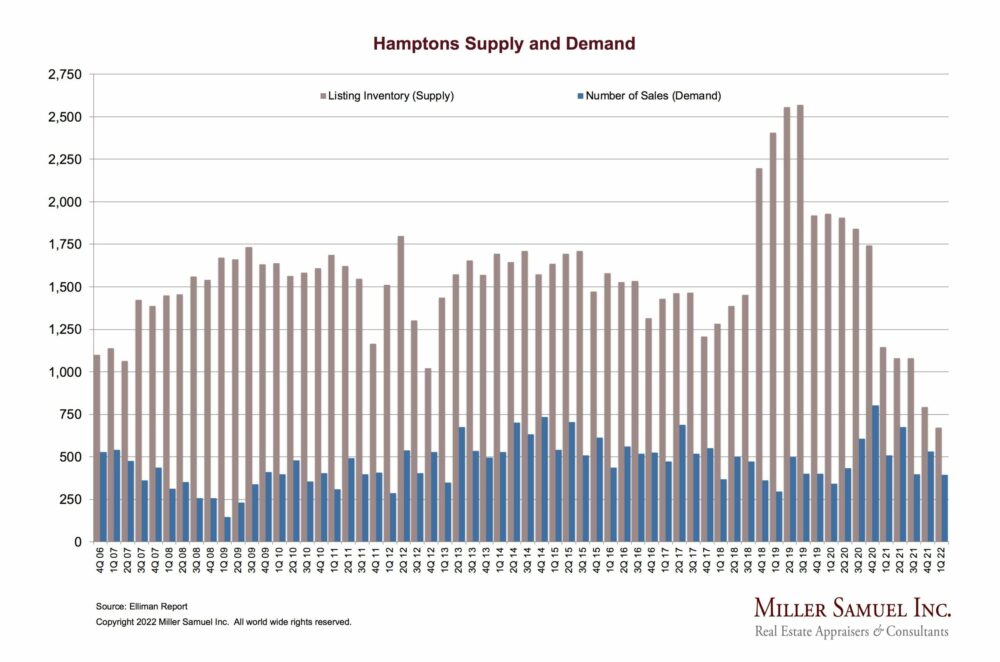 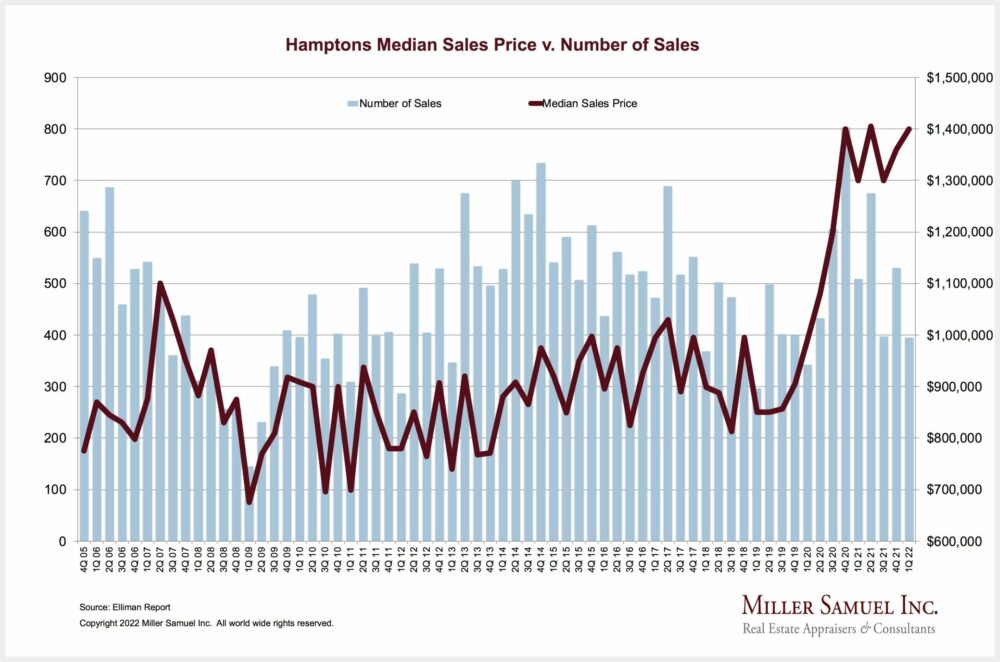 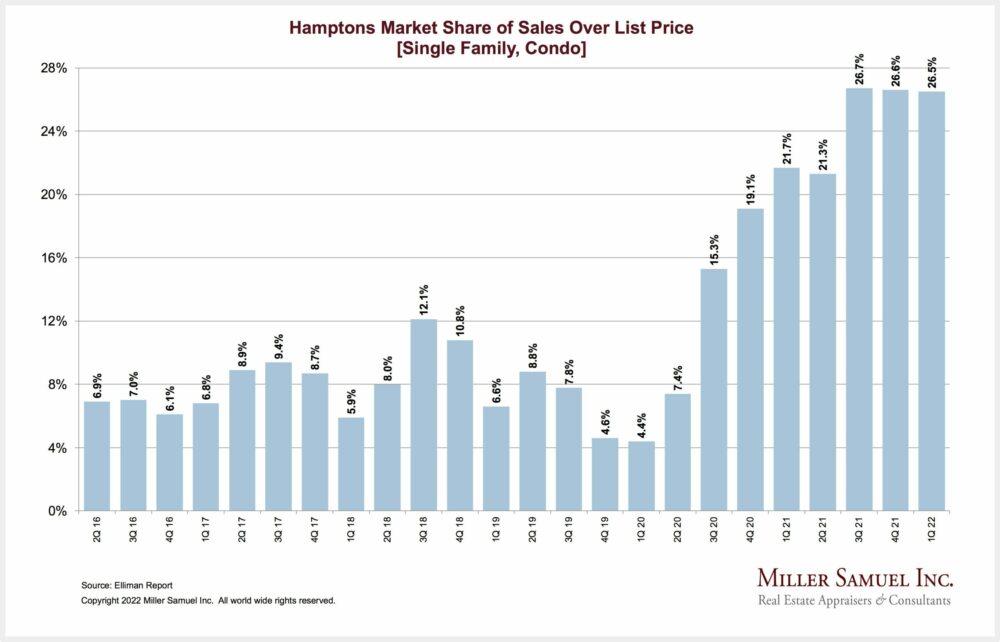 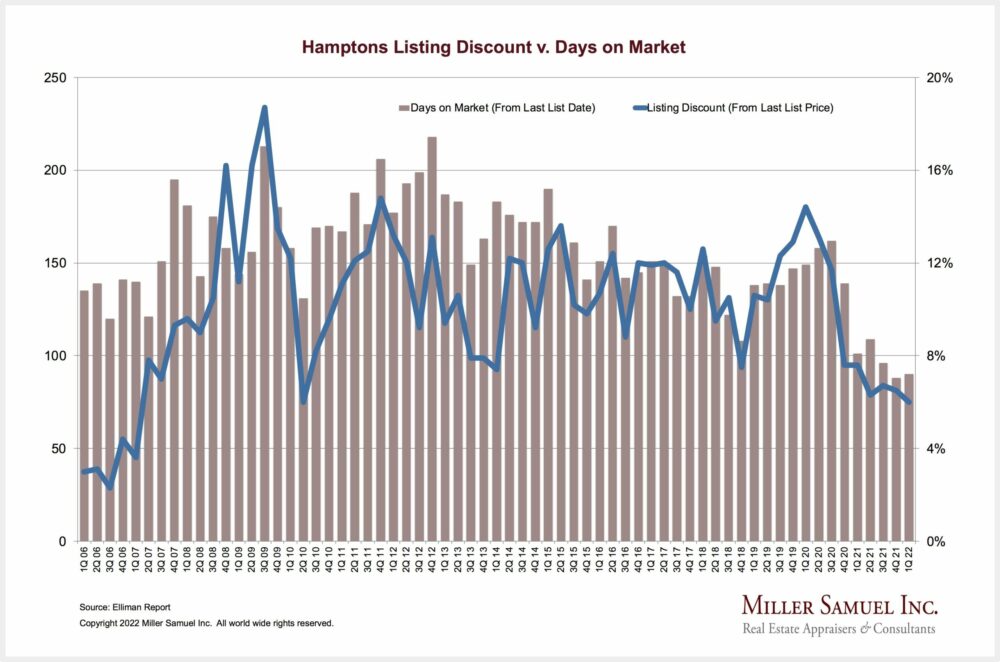 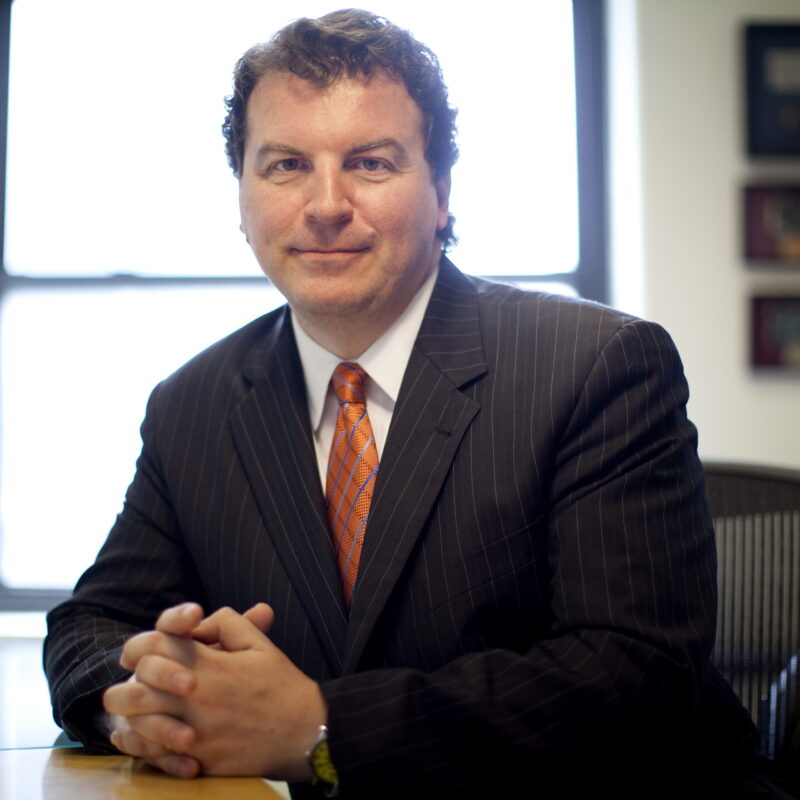 Jonathan Miller, the president and CEO of Miller Samuel Inc., a real estate appraisal and consulting firm he co-founded in 1986. 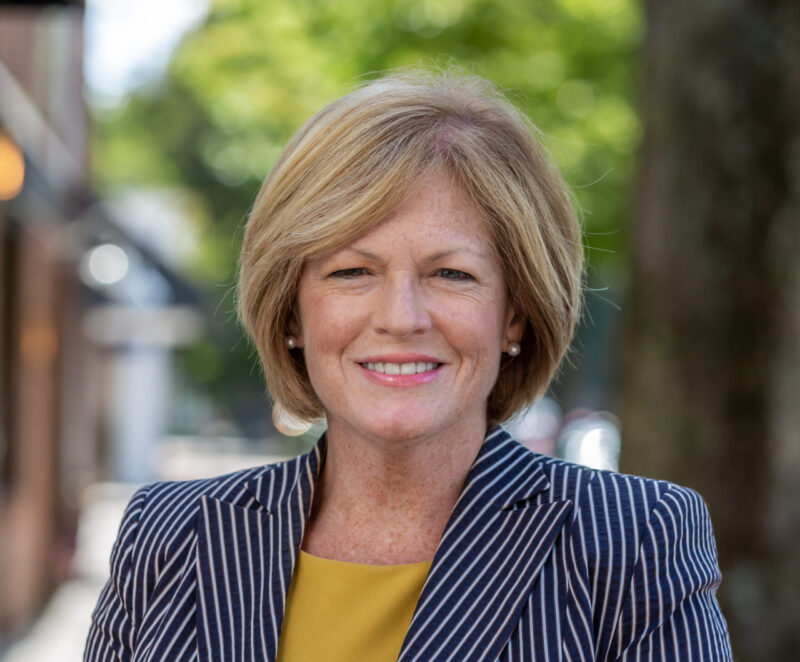 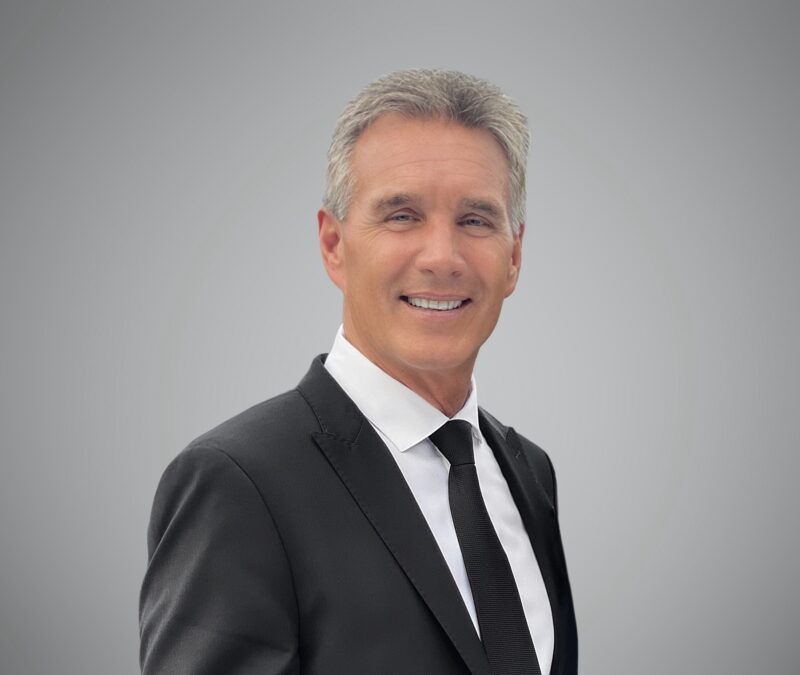 The inventory of homes for sale on the South Fork has “collapsed” — it’s down two-thirds from where it was prior to the pandemic, leading to more bidding wars, higher home prices and a breakneck pace of sales, according to market watchers and first-quarter Hamptons real estate reports.

The dearth of inventory also led to fewer sales. The number of home sales was down 22.4 percent in the first quarter compared to the same period in 2021, according to the Elliman Report — a decline that experts fully attribute to a deficit of sellers rather than a lack of interest among buyers.

Homeowners who would normally put their Hamptons houses on the market as they plan to trade up to something bigger are holding on to what they have instead, because there are few opportunities to move up, and the prices are elevated, analysts said. The ability to work remotely and the fears and uncertainty that come with the ongoing pandemic also contribute to owners staying put.

The median sales price in the first quarter was $1.4 million, a 7.7 percent year-over-year increase, according to the Elliman Report. The average price rose 24.7 percent, to $2.62 million.

At the end of March, the Elliman Report found that there were just 671 single-family homes and condos on the market from Flanders to Montauk, a new low. Of those 671, more than half, 354, are at a price point considered to be in the “luxury” end of the market. The entry level to the luxury market, based on the top 10 percent of sales, is $4.8 million. Under that figure, there are just 317 homes for sale.

“Inventory has collapsed; it’s down 41.5 percent, year-over-year, to the lowest on record,” said Jonathan Miller, the author of the Elliman Report, on Monday. “And it’s also 65.2 percent below prepandemic levels — the first quarter of ’20.”

Miller, of the real estate appraisal and consulting firm Miller Samuel Inc., said these circumstances are not unique to the Hamptons. It’s true of the New York metro area and the 40-some markets he covers nationwide for Douglas Elliman.

“Nationally, there has been a collapse of supply,” he said, “and probably one of the best things that could happen in terms of sustaining a vibrant or an actively moving market is seeing mortgage rates rise.” That’s because demand is “eviscerating” any semblance of supply available to buyers, he explained.

Miller said he does expect more inventory to come on the market in the second quarter, as it usually does in spring. However, he said demand will continue to overpower supply.

Miller finds the frequency of bidding wars over houses to be very telling. For the last three quarters, more than one out of four homes have sold for more than their last asking price, he noted, and that means “demand remains insatiable.”

Meanwhile, in the Long Island market, excluding the Hamptons and North Fork, plus or minus 50 percent of sales are subject to bidding wars, according to Miller.

Though he doesn’t have hard numbers to show it, he knows that a good portion of Hamptons home purchases are done in cash. Because mortgages are not a factor for cash buyers, they can brush off rising mortgage rates.

“In the Hamptons, it’s a mistake to assume that rising rates are going to have a significant impact on dampening sales,” Miller said.

He does not see prices falling anytime soon.

“There is a firm underpinning under prices, because inventory is woefully inadequate,” he said, adding that credit conditions are tighter than normal, so he does not see a banking crisis on the horizon. “The words that everybody will be using on the other side of this boom are going to be ‘plateau’ or ‘moving sideways’ — until the next uptick.”

Nanette Hansen, the brokerage manager for Sotheby’s International Realty in East Hampton, said she noticed a shift in the market right in the middle of the first quarter. There were a number of factors at play that she identified: the Russian invasion of Ukraine, global anxiety, stock market fluctuations, inflation, rising gas prices, and the world opening up from COVID-related restrictions.

“There was a little bit of a pause, I’d say, at the end of February that still is happening, but when we do list a property and it is appropriately priced, we have interest immediately on the sale side,” she said.

Hansen noted that the Sotheby’s East Hampton brokerage normally has a portfolio of between 100 and 120 exclusive listings and now is down to about 35.

On the rental side, there are a record number of properties available, Hansen said, attributing it to buyers who entered the market during the height of the pandemic.

“The people who purchased luxury homes in 2020 and 2021 are finding that they want to try to capitalize and earn some income from their product,” she said. “And they have more options now with the world opening up of where they can spend their summer. So I think a lot of those people who became homeowners are offering the properties for rent across the board at every price point.”

Hansen thinks buyers should be aware that if they like a particular house, there are likely two other buyers, if not more, eying the same product. “It’s really important for buyers in this climate to work with an agent who truly understands what’s going on in the local market and an agent who scours the market for deals,” she said.

Having an offer accepted is about more than just the amount of money offered, it’s about the terms, Hansen pointed out. Buyers are waiving financial contingencies and inspections and offering to wire the down payment the same day as the offer, she said. “It’s sort of a fever pitch of new tactics that are being attempted.”

She advises keeping the emotions and drama out of the transaction, and being direct, transparent and professional. Buyers can become emotional when they are outbid, especially if it happened to them before, she noted.

“It’s important to set expectations for your clients and let them know what is going on in the market and what could happen, not necessarily that’s going to happen,” Hansen said. “And try to just listen and be calm. Because once you stop listening, then emotions can sort of escalate.”

On mortgage rates, Hansen pointed out that rates are more than 5 percent, double what they were in summer 2020, and she expects more increases on the horizon. However, unless rates get up to the 8 percent level, she does not expect it to affect the Hamptons client base. “Real estate, especially luxury real estate in the Hamptons, has always been a good asset class for the well-heeled and it’s always, over time, proven to be a good hedge against inflation.”

Todd Bourgard, Douglas Elliman’s senior executive regional manager of sales for the Hamptons and North Fork, said that, generally speaking, a home priced properly will get several offers, and within one or two weekends of open houses, contracts will be going out.

Hampton Bays, where he sold real estate for 25 years before becoming a manager, generally has between 110 and 150 listings on the market at all times, he said. And that’s at all brokerages combined, not just Douglas Elliman. Last week, there were just 37 listings in the hamlet, he said.

Elliman just closed a deal in Hampton Bays for the $1.1 million sale of a 1,600-square-foot, three-bedroom, 2.5-bath home with a pool. “Those are numbers that we have never seen in that town in our history,” he added.

Good agents “go out and find the listings,” Bourgard said, meaning they get in contact with homeowners they sold to in the past and let them know what their homes are now worth.

Five percent mortgage rates haven’t had an effect yet, “but, of course, in year-round communities like Hampton Bays, when the rates start climbing, people can afford less house,” he said, explaining that someone who could afford a $750,000 house at 3 percent may only be able to afford a $600,000 or $650,000 house at 5.5 percent.

“Even though we are low on inventory, we had a very good quarter, and the agents are doing a great job in procuring those listings,” Bourgard said. “So we seem to be off to a very, very good start considering the lack of inventory. And I think we’re going to see that continue.

The Peconic Bay Community Preservation Fund’s revenue for the first two months of the year ... 20 Apr 2022 by Staff Writer

A contemporary beach house in Quiogue with its own private boathouse on Quantuck Bay sold ... by Staff Writer
×