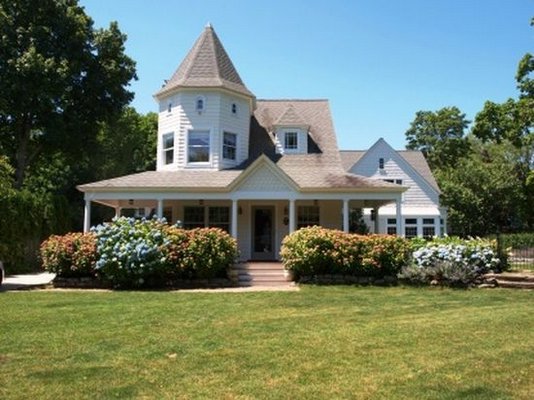 Joy Behar is known nationally as a comedian and talk show host, but closer to home she is also known as being a strong supporter of the Bay Street Theater, and in fact serves on its board of trustees. Thanks to a house she just purchased on Bay Street in Sag Harbor, for $4.75 million, the next time there is a board meeting, she can walk to it.

There are other places nearby in the village for Ms. Behar to hike to, including Havens Beach, Long Wharf, boatyards, the Dockside and other restaurants, and even Billy Joel’s digs down the street. The 4,500-square-foot traditional on nearly two-thirds of an acre has 4 bedrooms, 3.5 baths, a formal dining room, a newly renovated cook’s kitchen, and five fireplaces. A separate cottage on the property has a kitchen, bath, bedroom, and a living room with a fireplace. There is a pool, of course, but also a small pond within the landscaped garden.

Among the tidbits locals and others may not know about Ms. Behar is her original name was Josephina Victoria Occhiuto. After obtaining a Master’s Degree in English from the State University of New York at Stony Brook, she taught on Long Island, at Lindenhurst High School. Apparently, this was not an exciting enough occupation because she went to work for ABC’s “Good Morning America”—not in any on-air capacity, but as a receptionist.

Ms. Behar wrote jokes and took her stand-up routine to any clubs that would have her. And she stuck with “Good Morning America,” eventually in front of the camera and as a producer. She also appeared on “The New Show,” produced by Lorne Michaels of “Saturday Night Live,” on HBO comedy specials, “Way Off Broadway” and “Live From Queens” on the Lifetime channel, and audiences may have caught her in small parts in several feature films, including “Cookie,” “Hall Pass,” and Woody Allen’s “Manhattan Murder Mystery.”

Probably her biggest break in show business came in 1997, when she became one of the original panel members of the ABC daytime talk show “The View.” She remained with the show until stepping down in 2013 … but two years later she returned as a regular co-host. If Ms. Behar decides to write a play and give it a test run, she could (almost) hit the Bay Street Theatre with a laptop from her new home.