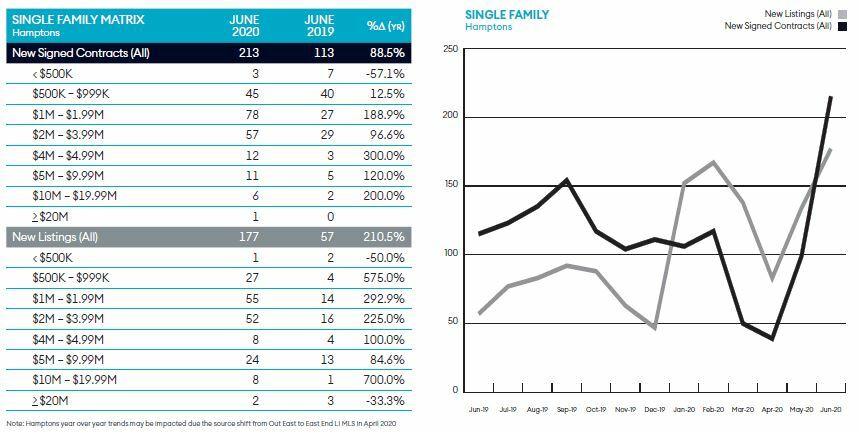 The Hamptons saw an extraordinary uptick in signed contracts for single-family homes in June as sales in the region continue to outperform the North Fork, Long Island, Manhattan and Brooklyn real estate markets.

Contract signings were up 89 percent in the Hamptons in June, compared to the same month in 2019, according to the Elliman Report. With 213 homes entering into contract, June 2020 was the most active month for the Hamptons market in more than a year. Just 177 listings came on the market in June, meaning homes found buyers faster than new inventory became available.

Hamptons signed contracts were greatest in the $1 million to $2 million range, accounting for 37 percent of the region’s June total.

The activity across all price points can be attributed, in part, to the release of pent-up demand after COVID-19 delayed many of the sales that would have happened in March and April. But considering that the North Fork and the rest of Long Island did not experience the same spike in sales activity, there must be other factors in play as well.

Real estate agents were permitted to resume in-person home showings on June 10 in Nassau and Suffolk counties, as Long Island entered phase two of reopening its economy, while New York City did not enter phase two until June 22.

Contracts for Manhattan co-ops and condos slid 78 percent and 74 percent, respectively, in June, year-over-year. Co-ops were down 58 percent in Brooklyn and condos there were down 42 percent.

Though the North Fork is reopening at the same pace as the South Fork, contracts for single-family homes there were up just 29 percent in June. A 29 percent increase is nothing to sneeze at, but the Hamptons increase was triple that.

The Hamptons real estate market benefited as Manhattan residents fled the city during the COVID-19 pandemic. In addition to the buyers who normally come to the South Fork to find a weekend and summer home, now real estate professionals report seeing buyers who wish to work from home comfortably for the duration of the pandemic, and perhaps longer. A scarcity of rentals — desirable rentals were snatched up in March and April as New York State instituted social distancing measures and the scope of the pandemic became more apparent — also reportedly drove sales.

Other second-home markets such as the Berkshires, the Hudson Valley and upstate Connecticut all have a similar story to the Hamptons, according to Jonathan Miller, the CEO of real estate appraisal firm Miller Samuel Inc., who prepares the Elliman Report.

In March and April, when people were concerned about being locked down in the city, they looked to rent single-family homes initially, he said. The Hamptons rental market in particular was “insane” during that period, he said.

“There just wasn’t enough product,” he noted. “And I’m hearing stories of some rents that were being paid that were 20 to 50 percent above the ask.”

Meanwhile, Hamptons home sales bottomed in April, before contract signings surged in May and June, exceeding 2019 levels for those months, he said.

Mr. Miller pointed out that homes sales were good in the first quarter this year, and the expectation was that the spring market would be good around the New York City metro area. Then the COVID-19 crisis came along, and the only market that “defied gravity” was the Hamptons, he said.

In addition to the “lockdown panic,” he said the Hamptons benefited from the ubiquity of Zoom — the video conferencing program that many businesses are now using to communicate among employees and with clients — and people realizing that they don’t need to go to a physical office five days a week to get their jobs done.

Mr. Miller said he wanted to caution that from mid-March until the start of phase two, in-person real estate showings were prohibited. Because of this, “the spring market was effectively removed from the calendar, and it was kicked down the road,” he said. “And here we are in July, and it’s feeling like April.”

The surge, in part, reflects the release of pent-up demand, as well as supply, he said, explaining that sellers who pulled their listings in March, or waited, have now put that inventory on the market.

“Until that pent-up demand is satiated toward the end of the summer, we won’t see what the actual market is underneath it,” Mr. Miller said.

He is also watching for a possible second wave of coronavirus in New York State and to what degree the economy rebounds.

He noted that he is hearing, anecdotally, that there are many deals percolating in Manhattan right now.

“This isn’t all about everybody in Manhattan moving to the Hamptons or upstate Connecticut,” he said. “There is moderation in the story that needs to be added, but it is clear that there has been a tremendous shift or outlook for the East End.”