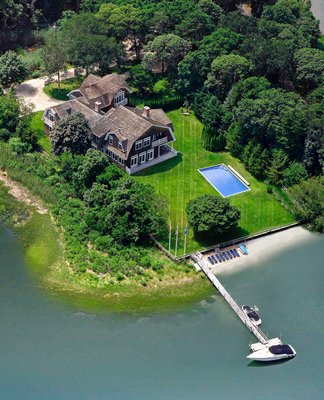 The North Sea house where members of the Kardashian clan summered in 2014 is still on the market, and now for a bit cheaper.

The list price for the 8,900-square-foot home on a 2-acre peninsula at 317 Noyac Road was $13.95 million for more than three years with no takers, but the ask was recently trimmed by more than $1 million. The new price tag is $12.75 million.

The property was the subject of paparazzi fascination in 2014 as reality television stars Khloé Kardashian, Kourtney Kardashian and Scott Disick spent the summer there. The sisters opened a pop-up retail store, Dash, in Southampton Village for the season, and cameras followed their activities for the “Keeping Up with the Kardashians” spin-off series “Kourtney & Khloé Take the Hamptons.” Sisters Kim Kardashian, Kendall Jenner and Kylie Jenner, as well as Kardashian-Jenner matriarch Kris Jenner, visited the North Sea abode.

The 5-bedroom, 6.5-bath gambrel residence with a professional-grade kitchen has numerous amenities, including a heated pool, an 85-foot private dock and nearly 360-degree waterviews. The cost to rent for summer 2017 is $295,000 for Memorial Day through Labor Day, or $250,000 for July through Labor Day.