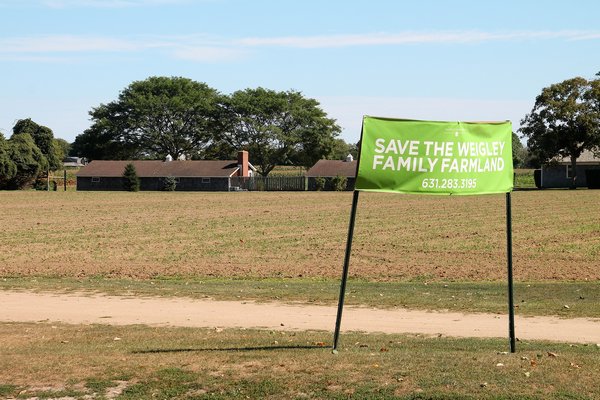 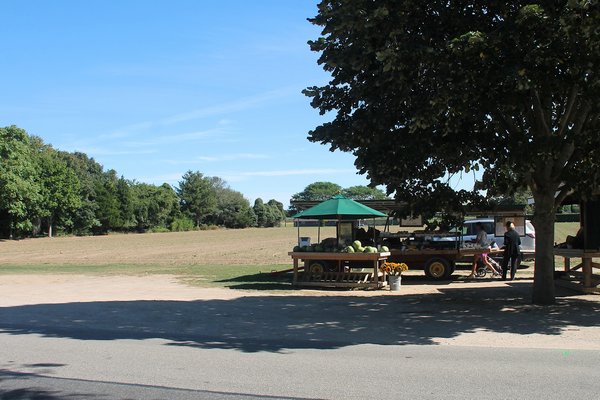 The Weigley family farmland and the Babinski farm stand in Wainscott. KYRIL BROMLEY 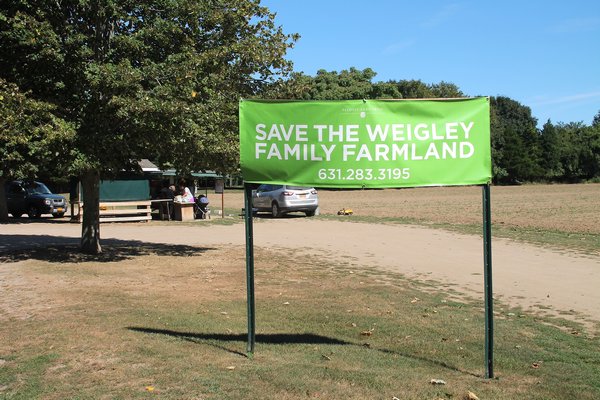 East Hampton Town and the Peconic Land Trust are in the thick of an effort to preserve the Weigley farmland in Wainscott, which is home to Babinski’s Farm Stand.

If the Land Trust can raise enough money by October 10, it will put up half the $7 million for the development rights to the roughly 4-acre parcel on the corner of Wainscott Main Street and Beach Lane. The town will use Community Preservation Fund revenues for its half of the purchase.

“We’re working very hard to raise the same amount,” John v.H. Halsey, president of the Peconic Land Trust, said this week. “We’re about two and half million dollars toward our goal.”

The Trust has been reaching out to the Wainscott community for help, including by requesting donations at its website and posting banners saying “Save the Weigley Farmland” near the farm stand.

Lisa and Bill Babinski lease the corner parcel for their retail stand and to farm just as their father, Andy Babinski, did before them. The land itself is owned by Jim and Jane Weigley, who are not farmers, although Andy Babinski is Ms. Weigley’s sister.

Ms. Weigley was given the land by her grandfather, Elisha Osborn, when she was 12, while her brother Andy received 20 adjacent acres that in 2006 were preserved by the Land Trust and the town.

“My mother’s father had the property,” said Ms. Weigley, whose father came from a Bridgehampton potato-growing family, “and when my mother and father got married, my father and his brother, John Babinski, took over.” After her father died, John Babinski took over the farm, then Andy Babinski did, and now Andy’s son Bill Babinski farms the land.

“It was given to both of us,” Ms. Weigley said of herself and her brother. “We never could have purchased that land.”

If sold today for development, the land would certainly fetch more than $7 million, both Ms. Weigley and Mr. Halsey said—“given this market, and given ... [a spot] as prime as you can get, right up the street from the ocean in a very picturesque part of East Hampton Town, and protected land on either side,” said Mr. Halsey. Neither he nor Ms. Weigley was willing to name a specific figure, however.

But the land’s value is exactly what makes it difficult to hold on to. The Weigleys cannot afford the estate taxes that would come into play at fair market value if they passed the land on to their children. On the other hand, selling the development rights would not only ensure that it remains as open space but also devalue the 4-acre parcel to about $100,000 an acre, making estate taxes much more manageable.

“We really, really would like to preserve the corner,” Ms. Weigley said, “because it’s the family legacy. And we know we’re leaving money on the table, but Jim and I didn’t do anything to earn ... to earn that land.”

The October 10 deadline stems from the fact that the preservation effort has been going on since before the crash of 2008, after which, Mr. Halsey said, many donation pledges evaporated. “Pretty much most of it all went away,” he said.

“We’ve been working on this for seven years—we needed to pull the trigger,” Ms. Weigley said separately. “We’re very optimistic that it will happen, but if it doesn’t happen, we will have to do something to make our estate doable, because we have three children, and if anything happened to us, it would have to be sold.”

According to the Land Trust, a similar public-private partnership also made it possible to preserve Conklin family farmland with historic facade easements on a house and barn on approximately 3 acres on Wainscott Main Street and Sayre’s Path.

“This is sort of the missing piece in that area,” Mr. Halsey said of the Weigleys’ corner lot.

Information about making donations is available from Rebecca A. Chapman or Kim Quarty at the Peconic Land Trust in Southampton at 283-3195.