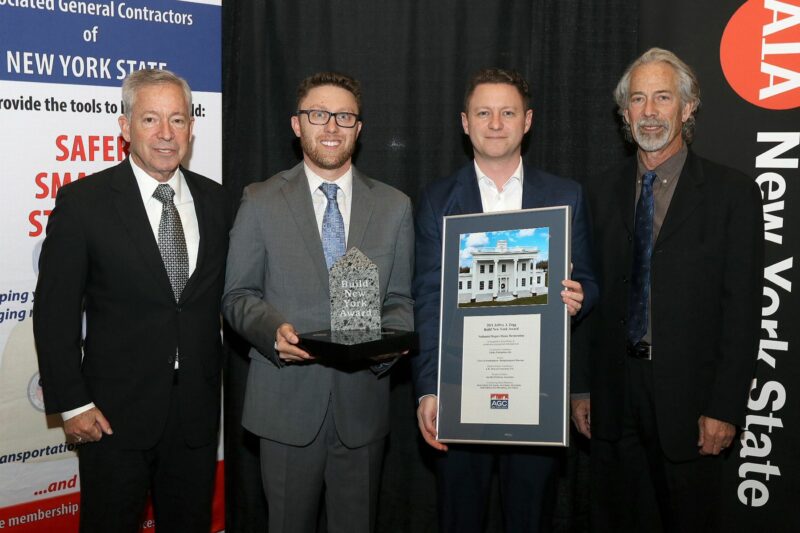 For the firm’s work on the restoration of the Nathaniel Rogers House in Bridgehampton, Lipsky Construction Company of Bayport has been awarded the Association of General Contractors Jeffery J. Zogg Build New York Award, the highest award in New York State for a construction project.

Standing at the center of Bridgehampton since 1824, the Nathaniel Rogers House fell into disrepair by the early 2000s and was in danger of being lost to redevelopment. In response, the Bridgehampton Museum (previously the Bridgehampton Historical Society), the Town of Southampton and the local community worked together to obtain and restore this historic house to its former glory.

In October 2015, Lipsky Construction Company began the complicated reconstruction of the house, according to the firm, and after passing through several periods of design, funding and construction, the multiphased project became the Bridgehampton Museum in April 2021.

“I have worked with many contractors on municipal projects over the past 20 years and Joel Lipsky’s attention to every detail was refreshing,” said construction manager Matt Jedlicka of L.K. McLean Associates P.C. “Also, each person from Lipsky understood the importance of their roles on the project team.”

Company co-owner Barry Lipsky added: “The successful restoration of a 200-year-old historic building requires the participation of expert craftsmen who can contribute their years of experience to the project. Most items found at the Nathaniel Rogers House were crafted by hand and extremely detailed. At Lipsky Construction we understood the importance of blending old with new and therefore went through a rigorous research process of examining old photos, drawings, sketches, and artifacts from the neighboring museums. Trade contractors participated in this research and method development process, which resulted in forming a clear plan of action for restoring, replicating, and fabricating all required items for this project.”

In 1990, the Build New York Awards program was developed as a way to highlight the positive impact of the construction industry in New York State involving building and heavy/highway construction. The award emphasizes the whole construction team, not only the general contractor or construction manager, but also the owner, architect, engineer, subcontractors, suppliers and craftspeople who contribute to the success of a project.

“The team from Lipsky Construction was committed to providing excellent service throughout the entire project, from the careful documentation of existing conditions before beginning work, until the final close out process,” Southampton Town Supervisor Jay Schneiderman said. “They are worthy of recognition by the Associated General Contractors of America.”

The Nathaniel Rogers House is listed on the National Register of Historic Places and is designated as a Southampton Town landmark.