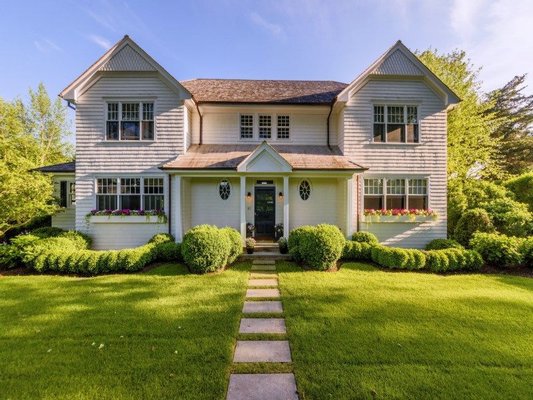 If you want to compile a list of veteran, award-winning journalists who live on the South Fork, a good place to begin is the cull from the masthead of Vanity Fair, with the likes of Robert Sam Anson and Michael Shnayerson (both of Sag Harbor) on it. Don’t leave Marie Brenner off that list! The award-winning writer and her financier husband, Ernest H. Pomerantz, have just closed on a house on Mill Hill Lane in the Village of East Hampton. The sale price was $4.25 million.

Described as an “architectural gem,” the 3,900-square-foot manse has five bedrooms and seven baths. The main floor features a formal dining room with a wood-burning fireplace, custom kitchen, and even a powder room. The dwelling also offers a media room, gym and a covered porch overlooking the 40-by-14-foot saltwater pool. The great outdoors are even greater thanks to several patios, an outdoor fireplace and lush landscaping. A bonus is the center of the village being only moments away.

One of the new owners, Marie Brenner, is a San Antonio native. She had an aunt, Anita, who was a member of the circle of Mexican muralists and artists who included Diego Rivera and Frida Kahlo. She was also one of the first women to be a regular contributor of articles to The New York Times. Her niece came to New York to earn a master’s degree from the New York University Film School. Among Ms. Brenner’s “firsts” is that as a member of the Boston Red Sox press corps, she was the first female baseball columnist covering the American League. In 1980, she became a contributing editor for New York Magazine—one of the events she covered was the wedding of Prince Charles and Lady Diana Spencer—and four years later she joined Vanity Fair. Probably her most memorable article in that magazine appeared in 1996. “The Man Who Knew Too Much” was about Jeffrey Wigand and the tobacco wars, and it became the basis for the Oscar-nominated Michael Mann film “The Insider,” starring Al Pacino and Russell Crowe.

Let’s not overlook Mr. Pomerantz. He and Ms. Brenner have been married since 1985. Today, he is chairman of Stonewater Capital LLC in Manhattan, and he sits of the board of directors of the Phoenix House Foundation.