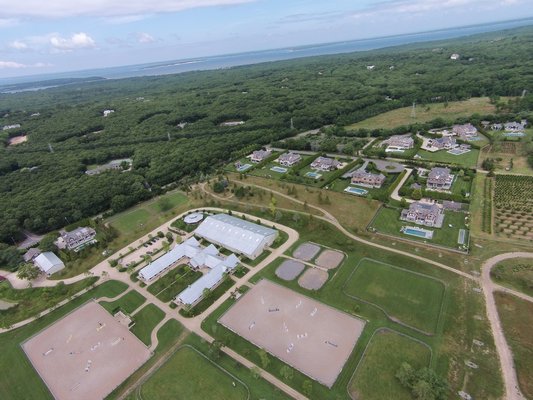 This fence was made from the wire mesh used in cement structures. 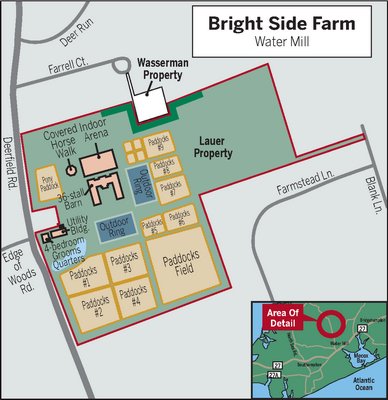 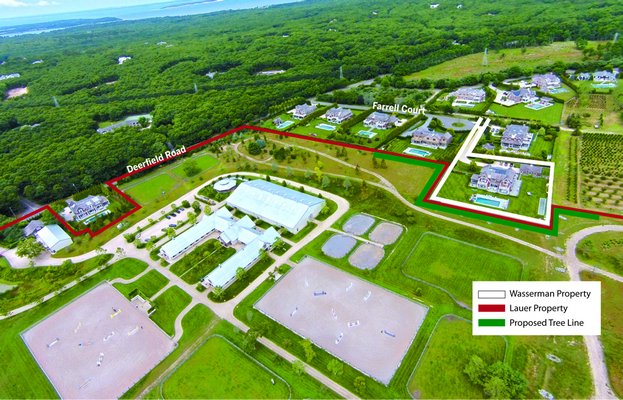 Matt Lauer isn't out of the woods just yet in his effort to plant trees at the border of his horse farm in Water Mill.

The Today Show" co-anchor wants to plant 42 trees and 194 shrubs along the northern boundary of Bright Side Farm, the property he owns with his wife, Annette, on Deerfield Road. According to its website, Bright Side is "an idyllic retreat for horses and their riders, offering the luxury of time and space in the sprawling fields, rings and paddocks of its 40 acres."

Jack and Jodi Wasserman, neighbors of Mr. Lauer whose house is on Farrell Court, are convinced that the trees would obstruct their pleasant view of Bright Side's open space.

Most of the landscaping would go along the back of the Wassermans' property, which lies adjacent to the farm and now offers an unobstructed view of it. A statement provided by Patrick Fife, the Riverhead attorney representing the Wassermans, says the landscaping would violate the terms of an easement that went into effect when Southampton Town bought the development rights for the Lauers' property. The attorney also said the proposal would violate a slew of conditions set by the Town Planning Board when it approved a site plan for the horse farm in 2012, including one provision that there could be no landscaping that would obstruct the view and another that the farm not be used as a riding academy.

"The Wassermans' intent is to maintain the open views that are guaranteed by the development rights easement the town paid over $3.5 million to acquire from the previous owner of the Lauers’ farm in 2005," Mr. Fife wrote in an email.

Mr. Lauer's attorney, Timothy S. McCulley of Burke and Sullivan in Southampton, did not immediately return a call seeking comment.

An amended landscape proposal—two earlier ones were deemed by the Town Planning Board to be too intensive—will be presented to the board on Thursday, July 23. In the meantime, Planning Board Chairman Dennis Finnerty said he imagines there will be plenty of controversy.

“It’s been an ongoing issue, where landowners want to create private enclaves with the use of landscaping," he said. “The public has an expectation to feel that the vistas, the viewsheds, go along with that property.”

Mr. Finnerty said that property owners planting trees on "agricultural" properties for privacy purposes is one of the more "vexing problems" with privately-owned open space parcels. He cited a court case the town won two years ago involving a property on Ocean Road in Bridgehampton whose owners sought to do exactly what Mr. Lauer proposes, and who sued the Planning Board when their application was denied.

“We prevailed. We affirmed the town’s goal of using agricultural reserves not only for agriculture, but to maintain agricultural business, open space and open vistas for the public, as well as the adjoining property owner,” Mr. Finnerty said.

Mr. Lauer is not the only celebrity whose efforts to plant trees have been met with resistance. According to news reports, Madonna created a tree farm on a parcel she purchased adjacent to her Bridgehampton estate on Mitchell Lane, presumably to secure privacy at her mansion. She was able to buy the parcel at a bargain because the development rights had been purchased by the town and county, and she also received a tax break from the county for putting the parcel to agricultural use.

"A lot of people are saying she’s taking advantage, which is nonsense," said Enzo Morabito, a broker for Douglas Elliman Real Estate. "She has every right to do what she’s doing."

Meanwhile, in Sagaponack, the owners of a property on Daniels Lane planted Christmas trees, in a deliberate attempt, in the view of one village official, to obstruct the view after the village denied an application to subdivide the property. Again, an easement stated that the agricultural area should not be screened off, and the property owners were rewarded with property tax relief for maintaining the acreage as farmland.

In the case of Mr. Lauer's application, Mr. Finnerty said the Planning Board will work to ensure that his plans will also take into account the rights of the public to enjoy views of open fields.

“The town is really committed to maintaining the open vistas of its agricultural land," Mr. Finnerty said.