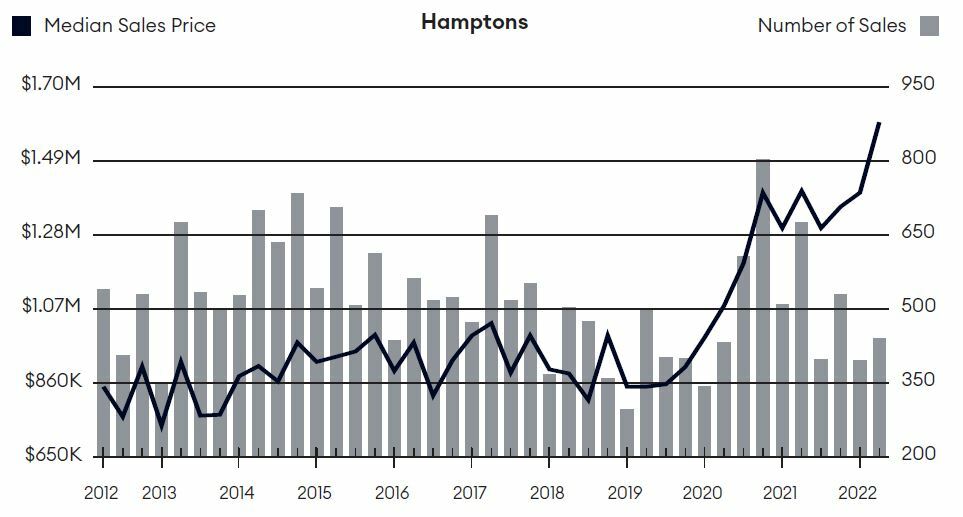 At the end of the second quarter of 2022, the inventory of single-family homes for sale on the Hamptons market was 877, a 15.6 percent decline from where inventory stood a year earlier, but a bounce back of 33.1 percent from the low of 659 that came at the end of the first quarter this year.

Inventory is still near that historic low, contributing to an all-time-high median sales price of $1.65 million, a 10.4 percent increase year-over-year, according to The Elliman Report. The average sales price surpassed $3 million, a 22.2 percent jump.

Of those 877 listings, 333 had asking prices above $5.78 million, the sales price that delineated the top 10 percent of the market during the second quarter.

There were a number of other signs of a strong market found in the report: The average number of days a single-family home spends on the market slipped 8 percent from a year ago, down to 103. The average discount off the asking price fell from 6.3 percent at the half-way point of 2021 to just 4.5 percent.

Other indicators point to a market that is cooling off, but only slightly: The months of supply — the time it would take to absorb all inventory at the current pace of sales — was up 35.4 percent to 6.5. The number of closed sales was down 37.8 percent, though it’s important to note that low inventory, rather than a sharp drop in buyer interest, was the main factor suppressing sales.

Headwinds such as growing inflation and rising mortgage rates don’t appear to be having an effect, according to market watchers.

“The rising rates and the higher cost of things have not affected our marketplace at all to date,” said Todd Bourgard, Douglas Elliman’s senior executive regional manager of sales for the Hamptons and North Fork.

Bourgard noted that a high percentage of deals made in the Hamptons are done in cash, so mortgage rates are not a factor.

“There is still a shortage of inventory, even though we’re beginning to see it creep up,” he said. “But we still have a number of buyers that have been waiting on the sidelines for that perfect house to come up, and now that a little bit more inventory is coming on, they’re pulling the trigger.”

He added that one in three deals Elliman strikes in the Hamptons involve multiple bidders. A year ago, according to Bourgard, it was nearly one out of every two sales.

“We still have a very good pool of qualified buyers looking for that perfect home for themselves, and they’re coming on now,” he said. “Like I said, the inventory is creeping up. So we are getting more homes on the market every week.”

When inventory is low, agents have to get more creative, he advised, explaining that they can go back to homeowners who listed houses a few years ago that never sold or go to people they sold homes to within the last five years and let them know the values of their house now. “Some of them are pleasantly surprised and decide to put it on the market,” he said.

Every year, in August and September, more homes come on the market, Bourgard pointed out. “This is something that we tend to see every year, and we’re very, very happy to see now.”

Bourgard said he doesn’t have any concerns at this time and still sees a very good marketplace. “Not only are the Hamptons a beautiful place to live, but the homes here are a great investment,” he said.

It’s not just a few areas where activity is humming along.

“Across the board, all of my offices are equally as busy, and I have an office in every town in the Hamptons,” Bourgard said.

Robert Nelson, the executive managing director of Brown Harris Stevens of the Hamptons, said the tide has turned in terms of new inventory versus signed contracts for home sales: The number of homes coming onto the market is greater than the number of homes for sale going into contract, so there are more available homes for buyers.

“For everyone, more inventory is needed because we’ve exhausted our inventory,” Nelson said. “… More inventory brings more of a healthy market.”

More listings are needed to provide more choices because there are buyers who are very ready to buy who just need homes to come on the market that fit their parameters, according to Nelson.

Buyers have looked at what’s currently out there that meets their requirements and is in their price range, and it’s not a lot, he said. “The additional listings will help put those buyers into a home that they want.”

Nelson, too, sees many homes with multiple offers and going into contract very quickly. “That says we still have a very healthy, strong market,” he said. “And some of the properties going in are very expensive. So that also says the extremely wealthy people still are optimistic and believe in purchasing in the Hamptons at those high figures.”

He also sees this summer’s difficulties at airports, including canceled flights and lost luggage, as helping the real estate markets around New York City.

“They’re comfortable knowing they have a place and don’t have to be stuck in one place,” he said of second-home buyers.

He also finds it notable that while the total dollar volume — the amount of money that changes hands for all home sales on the South Fork — was down in the second quarter of 2022 compared to the same period of 2021, it is still above the 2020, 2019 and 2018 levels. To him, that says the higher end of the market is still transacting.

“Wall Street, etc., you know, if they feel they can get a bargain in their secondary home market by waiting, they would be waiting,” Nelson said.

However, the breakneck pace at which new, well-priced listings get an offer, or multiple offers, at or above the asking price has slowed.

“We’re used to such speed that now we think of one or two months on the market as an older listing, and that’s not historically how the Hamptons views listings,” Nelson said.

He said to keep in mind that buyers are coming from all over the Greater New York area and aren’t all just waiting to look at homes because they have lives to live. “So sometimes it does take a month or two before the connection of the right house for the right buyer comes along,” he said.

During the height of the pandemic-driven buying frenzy, if a house did not have an offer within a week or so, it was a sign it was overpriced. In today’s market, Nelson believes a month is an appropriate time frame to wait for an offer before reevaluating the price, taking into account having an expert agent and top-drawer marketing. “If you don’t have an offer in that first month, then definitely you are overpriced,” he said.

He emphasized the need to listen to an expert: “They’re in the field 24/7. That is all they’re doing — is evaluating, looking and hearing of sales and in-contracts.”

He also noted that the Hamptons is not a market where all the homes in a subdivision are alike and sell within $10,000 of each other. It’s a varied market where a teeny dollhouse is next to a $12 million house, he said. “And that’s what makes pricing much harder here — but not to an expert real estate broker.”