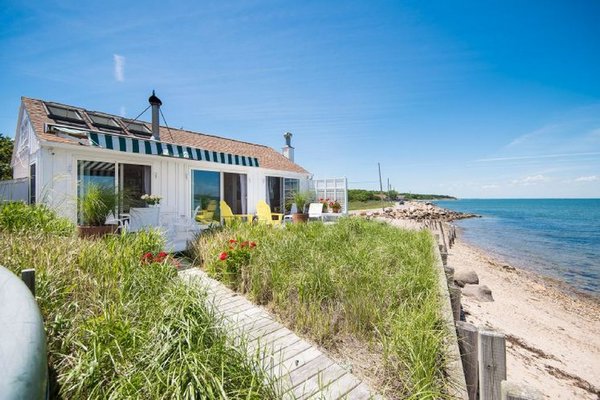 It’s always fun to report on a transaction involving an Oscar-winning actress, and even better when also involved is a Tony Award and a spouse who is a nationally recognized artist. The actress is Mercedes Ruehl, the husband is David Geiser, and they have just sold their waterfront house in East Hampton. The buyer is Samuel H. Trimble and the price was $1.2 million.

Described as “the quintessential Gerard Drive cottage, which has been photographed and painted by both professionals and aspiring artists for decades,” the white-shingled home on a lot that is under 5,000 square feet boasts expansive views of both Gardiners Bay and Accabonac Harbor. Inside is an open floor plan with cathedral ceilings and skylights, and outside, in addition to the breathtaking view, is a deck that runs the width of the house.

Quick, for what movie did Ms. Ruehl win the Academy Award for Best Supporting Actress? Oh, we’ll get to that. Let’s provide intel on her extensive stage work first, especially in plays written by the late Edward Albee, for decades a Montauk resident. She began that phase of her career with the Denver Center Theatre Company, then returned to her native New York for her first starring role on Broadway, in “I’m Not Rappaport.” Ms. Ruehl received Obie Awards, 20 years apart, for “The Marriage of Betty and Boo” and “Woman Before a Glass” and the Tony Award for Best Actress for “Lost in Yonkers.” She earned Tony nominations for “The Shadow Box” and Albee’s “The Goat, or Who Is Sylvia?”

A larger audience, of course, has seen Ms. Ruehl on the big screen. She made her debut as the “American girl in casino” in “Dona Flor and Her Two Husbands,” and other early roles were in “The Warriors,” “Heartburn,” “Radio Days,” “Big,” “Married To the Mob” and “Crimes and Misdemeanors.” Her breakout was in “The Fisher King” with Jeff Bridges and Robin Williams—and that is the answer to the above question, taking home the Oscar statuette in March 1992. Ms. Ruehl reprised her role in the film version of “Lost in Yonkers,” and her resume includes many more movie performances since.

Mr. Geiser was a University of Vermont graduate who was on his way to Yale when he took a big detour to San Francisco and became part of the underground comics scene there. Back on the East Coast, he has been a prolific artist whose works have been exhibited in galleries and museums around the U.S. and overseas. Closer to home, he will be part of an exhibition with Charles Waller and Mark S. Fisher that is to open at the White Room Gallery on Main Street in Bridgehampton on Friday, April 7. A reception for Mr. Geiser and the other artists will be held on Saturday, April 8, from 6 to 8 p.m., with music supplied by the Benders.