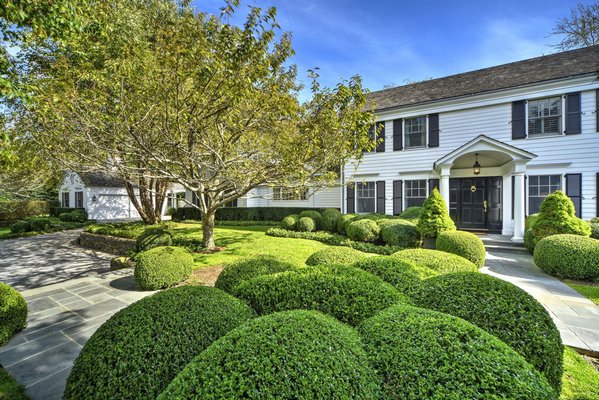 On the face of it, it might seem that 55 Egypt Close in the Village of East Hampton is a handsome but not unique property. But there is a bit of interesting recent real estate history to it.

First off, it was just sold, for $5.94 million. The south-of-the-highway residence is 4,700 square feet on 1.08 acres and contains five bedrooms and 5.5 baths. Not an expansive description in the usual sources: “Located a short distance to ocean beaches, transportation, and village shopping. Immaculate and beautifully decorated, on a quiet street with lush landscaping and a pool.” The buyer, however, is Nedenia Rumbough, and therein lies the tale.

She is the daughter of the actress and philanthropist Dina Merrill. Some readers may recall that in August we reported the sale of 8 West Dune Lane, also in the Village of East Hampton. We didn’t know much other than it is a 1-acre lot with a house on it, and it sold for $8.2 million. But the seller was Nedenia Hartley (or her estate, actually), whose stage name was Dina Merrill. The longtime local resident—and last surviving daughter of E.F. Hutton and Marjorie Merriweather Post—died in May 2017 at 93. It apparently took over a year to work out the sale of her property, with the buyers being Donald Handelman and Nedenia Rumbough, the daughter of Ms. Merrill’s first marriage.

Ms. Merrill grew up in the lap of luxury, with homes in New York and Florida, the latter being the 115-room Mar-a-Lago estate (purchased in 1985 by Donald Trump). She spent quite a bit of time at sea too, on the Sea Cloud, the family yacht, which hosted high-profile guests including the Duke and Duchess of Windsor. Though encouraged by her father to pursue a law career, Ms. Merrill turned to acting. She made her Broadway debut in “The Mermaids Singing” in 1945. The acting career was interrupted by marriage to Stanley Rumbough Jr., an heir to the Colgate-Palmolive fortune—who flew 50 combat missions as a Marine Corps pilot in World War II—and raising their three children. When Ms. Merrill resumed her career, prominent film roles included “Butterfield 8,” “The Courtship of Eddie’s Father,” “The Young Savages,” “Operation Petticoat,” and “The Sundowners.” After a divorce, she married the actor Cliff Robertson. After that 20-year marriage ended, Ms. Merrill married Ted Hartley, who was then chairman of RKO Pictures. Mr. Hartley, who was also a fighter pilot (in the U.S. Navy) before going into investment banking, is now 93.

From what we understand, the rest of Ms. Merrill’s property has just been sold, meaning 3 West Dune Lane. We don’t know any details other than it is 1.6 acres, but we do know that the property was purchased for an even $20 million by Stanley H. Rumbough, Ms. Merrill’s son, and Richard A. Handelman. It appears that both West Dune Lane properties will remain in the Rumbough family.