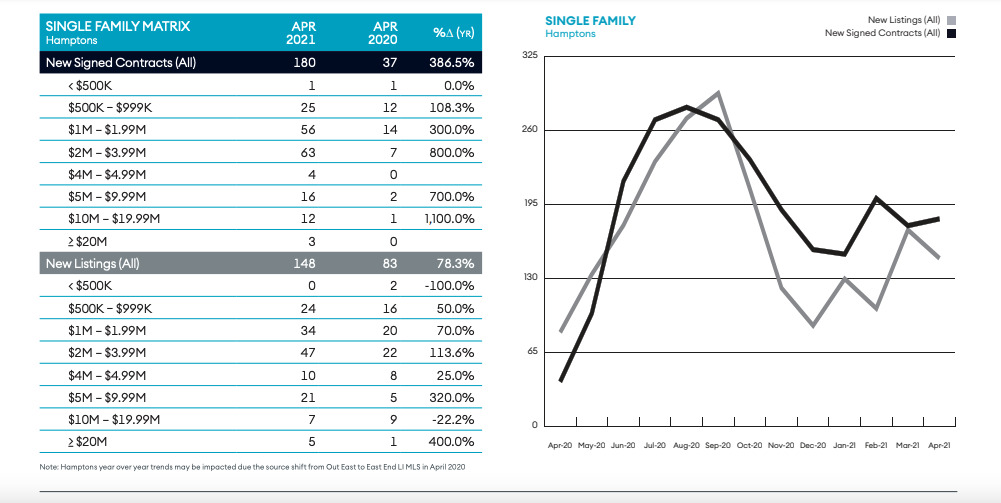 New signed contracts for the sale of Hamptons single-family homes and condos have risen year-over-year every month since June, according to the Elliman Report, and they more than quadrupled in April 2021 compared to the pandemic-time low of April 2020.

Just 37 contracts for single-family homes in the Hamptons were signed in April of last year as the coronavirus peaked in New York State. Economic and health uncertainty and stringent social distancing mandates during the state shutdown suppressed sales activity then, but a recovery began in May as the appeal of the space and safety of Hamptons homes won out over cramped city quarters and shuttered city dining and entertainment destinations

In April 2021, new signed contracts for single-family homes are up 387 percent, year-over-year. On a monthly basis, it’s the second-best month for contracts in the last five months. There was incredible strength in the price range of between $2 million and $4 million, with 63 deals signed. Above $5 million, there were 31 contracts inked.

There were 148 single-family homes put on the market in April, coming 32 listings short of keeping pace with the number of homes that entered contract.

The condo market, where inventory is very low, actually had one fewer sale in April 2021 compared to the same month a year prior — six compared to seven. Just five new listings were added.

On the North Fork, single-family home inventory has been incredibly tight since the pandemic-driven sales surge began, but new listings are picking up: There were 36 contracts signed and 51 new listings last month.

The Long Island market, exclusive of the Hamptons and the North Fork, experienced a 161 percent year-over-year increase in single-family home contracts, from 968 to 2,526. The number of new listings was 3,401, spread among all price points. It was the most new listings added in a month since October 2020.

Above $1 million, there were 88 deals for Long Island market single-family homes, and 170 new listings.

Manhattan’s recovery continues: April has 807 new signed contracts for co-ops, the best performance in more than a year on a monthly basis. On a year-over-year basis, that’s a 2,024 percent increase. Still, new listings outpaced the activity, with 1,095 additions to the market.

Likewise, the Manhattan condo market saw 526 contracts, a 2,668 percent spike. It was a little bit of a retreat from March, but still the second-best month in more than a year.