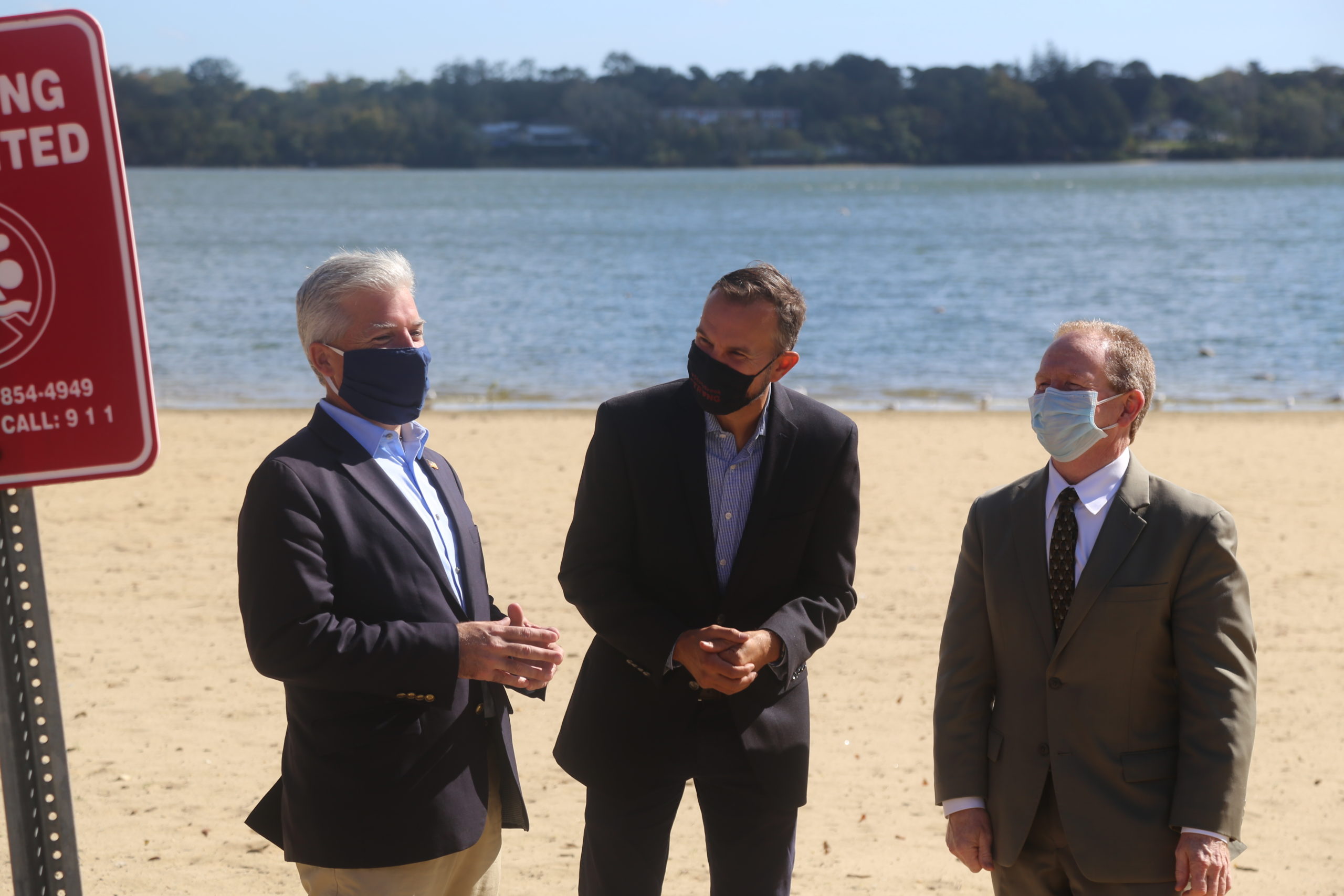 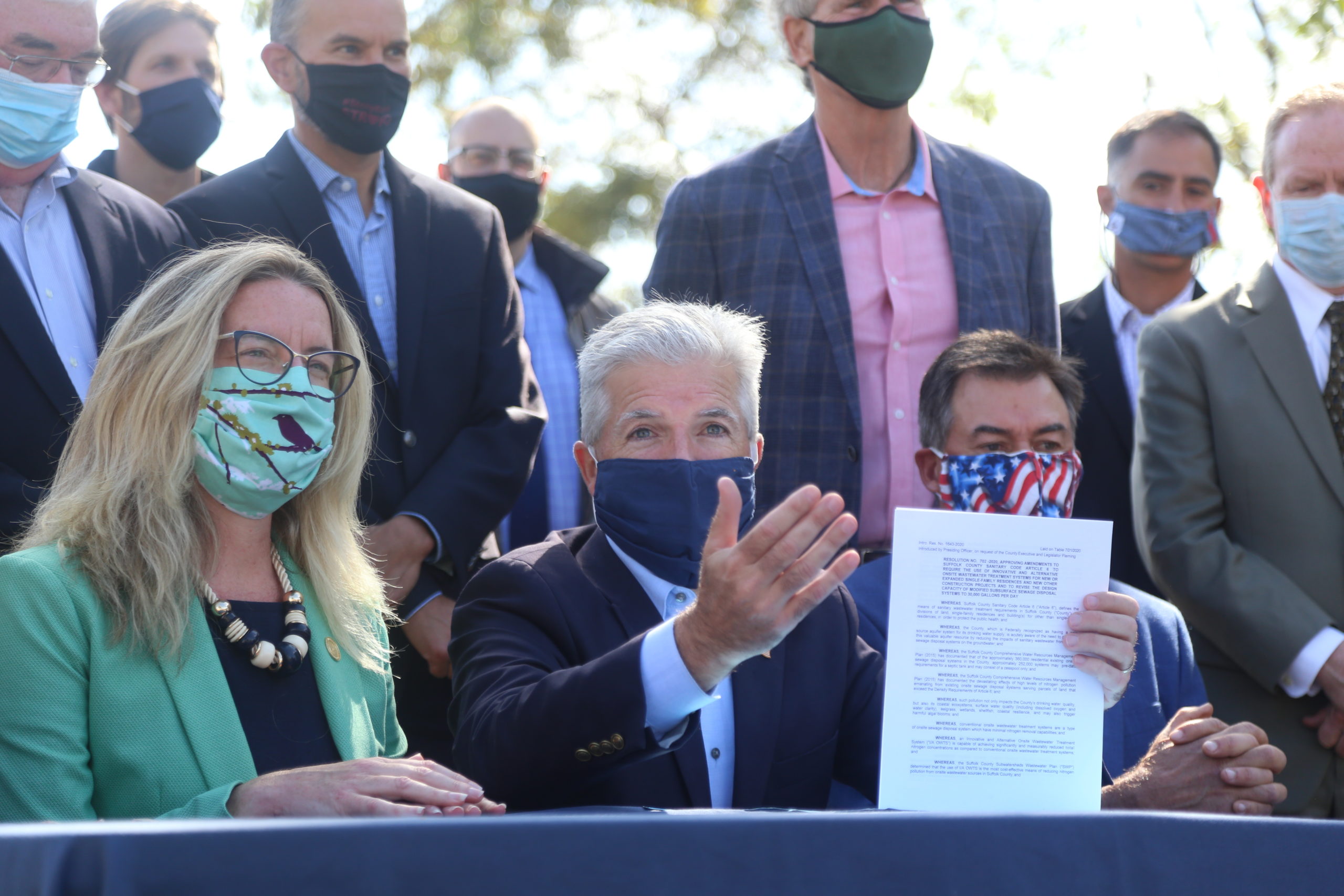 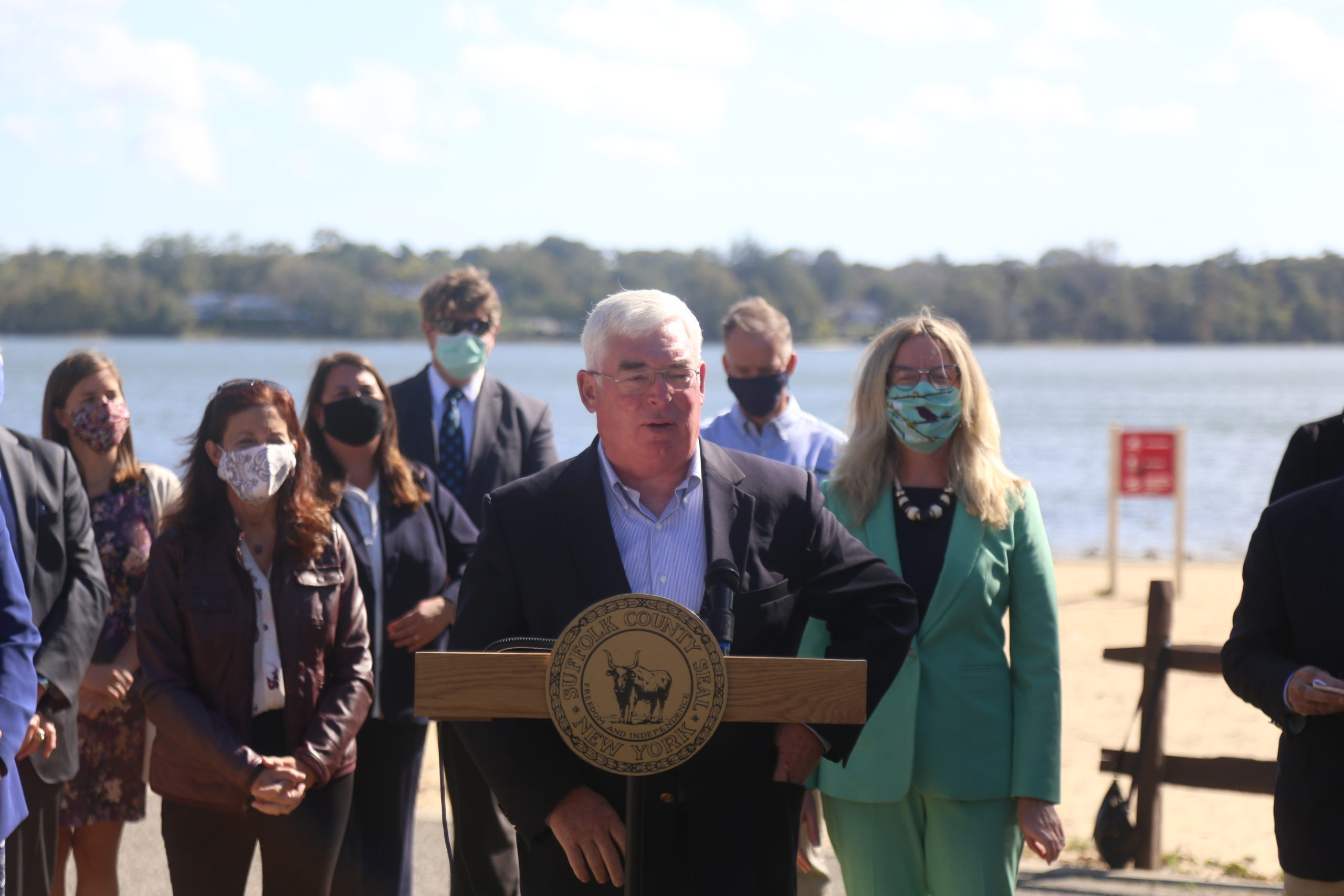 Kevin McDonald, the conservation project director for The Nature Conservancy on Long Island. 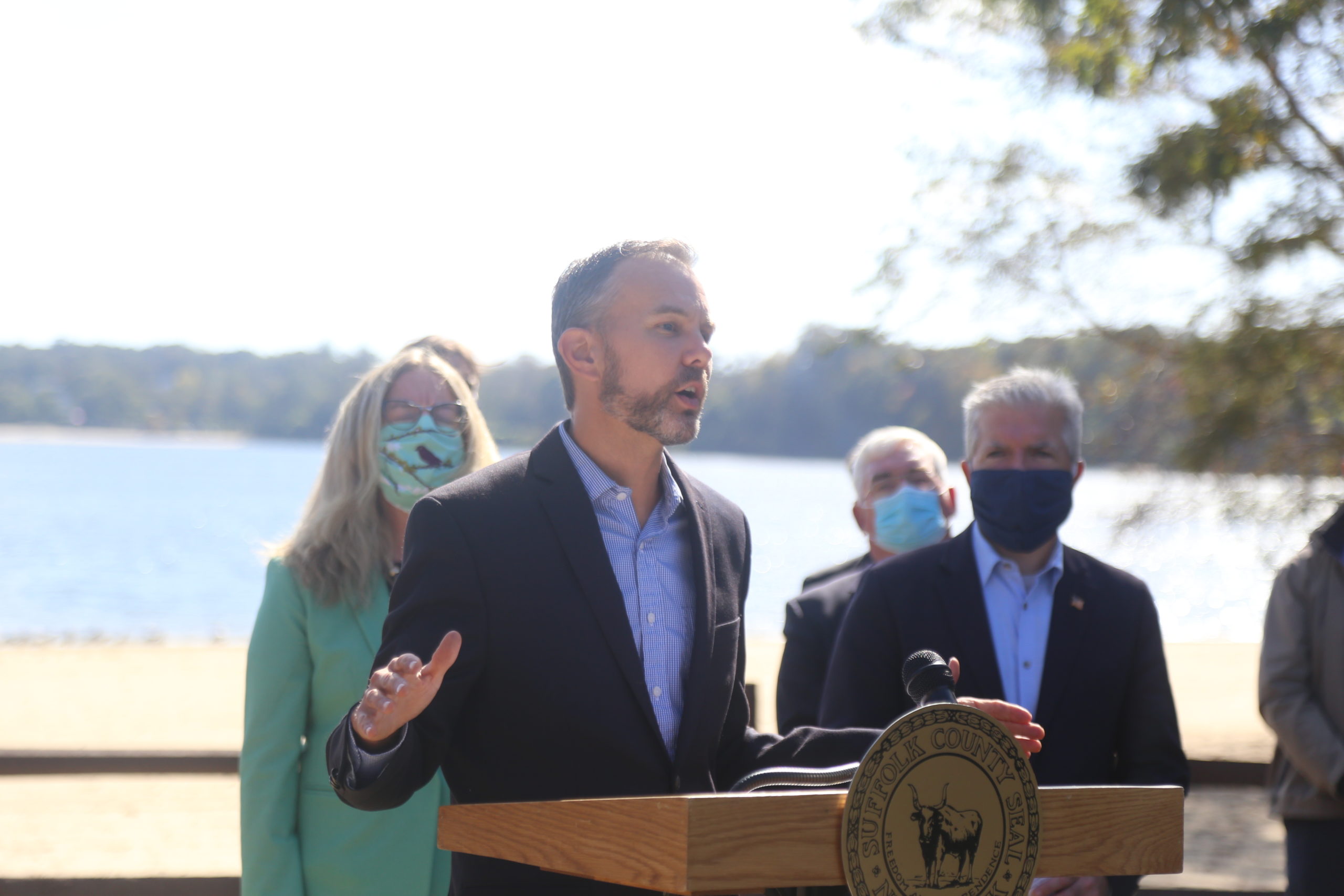 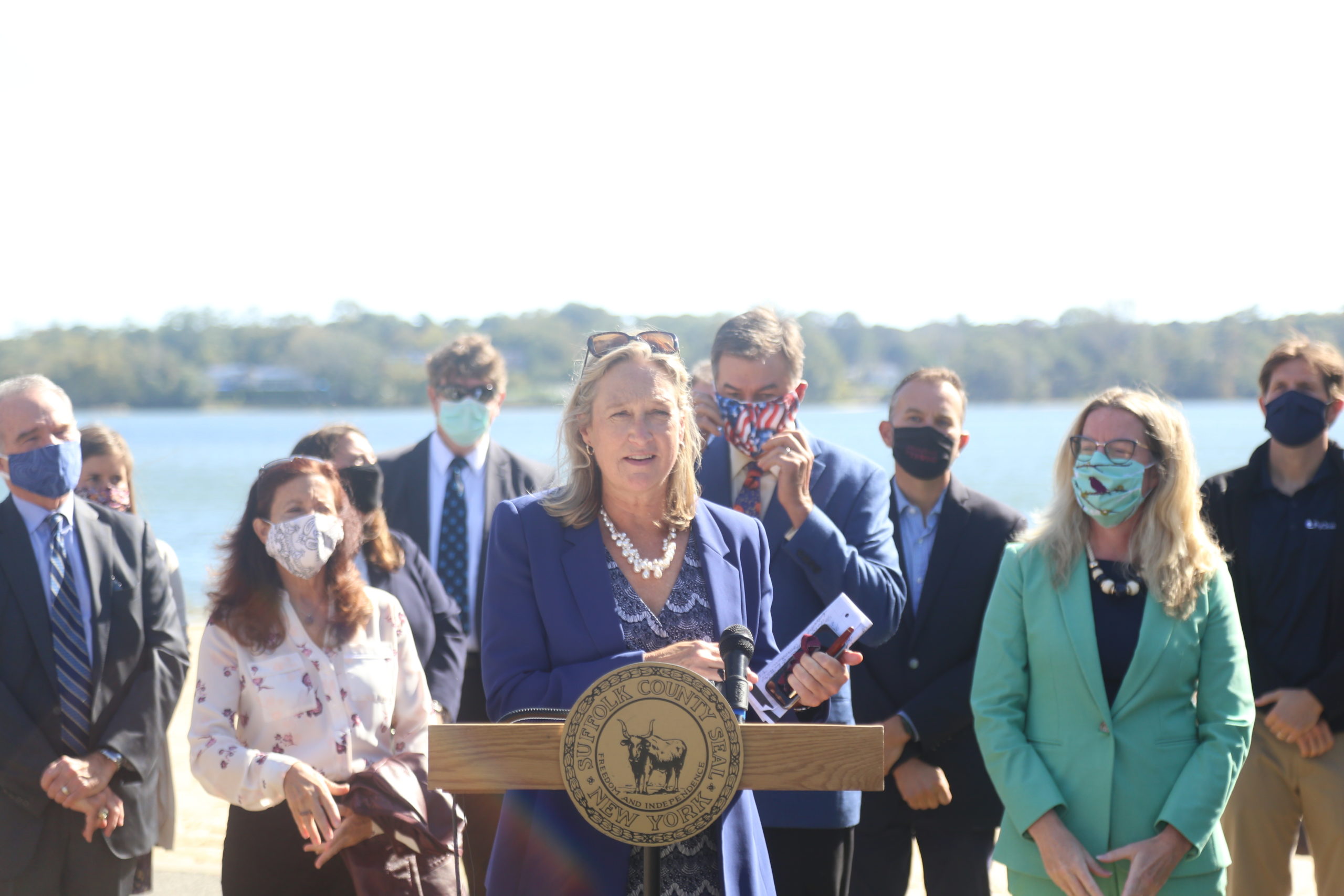 The legislation, which the Suffolk County Legislature adopted unanimously, furthers the county’s efforts to reduce nitrogen-loading in the county’s bays and other waterbodies and to protect drinking water, and it also includes a provision that makes it easier to install small sewage treatment plants in densely developed downtowns in need of revitalization.

Mr. Bellone signed the legislation at Lake Ronkonkoma County Park in the same spot where, in December 2017, he signed into law earlier legislation that closed the loophole that allowed failing cesspools to be replaced by new cesspools —which the county had banned in 1973 —instead of septic tanks.

The legislation signed last week allows owners of existing homes to continue to replace cesspools and failing septic systems with conventional septic systems, but in the case of major expansions of a home or new construction, advanced nitrogen-reducing septic systems are now required.

“You do not get to a unanimous vote on the Suffolk County Legislature on an issue of this importance easily,” the county executive said in remarks prior to the signing. “That does not happen accidentally. It’s because of the extraordinary work that has taken place to get us to this point.”

Mr. Bellone said that many of the same people with him that day also joined him there in Lake Ronkonkoma in 2017 when they announced that water quality was Suffolk County’s top priority and nitrogen was water quality enemy No. 1.

“We do not have a prosperous future if we are not protecting water quality,” he said.

Making advanced septic technology available in Suffolk County wouldn’t have happened had businesses and pioneers not stepped forward, Mr. Bellone said. “Without the industry in place, you can’t snap your fingers or turn on a switch and all of a sudden have the infrastructure that’s necessary to reverse decades of damage that had occurred.”

He said the bill also sends a message that lawmakers are not taking their eye off the ball, even in the midst of a pandemic, because water quality matters to the generations to come on Long Island.

“It’s not just another bill we’re signing,” Mr. Bellone said. “What this legislation means today is that we are continuing to make good on our commitment and our promise that we are going to protect and preserve water quality in Suffolk County because it means everything to us.”

Suffolk County Legislator Kara Hahn of Setauket, who is the chair of the Legislature’s Environment Committee and Economic Development Committee, said the bill is an example of synergy between meeting both environmental and economic concerns.

Shellfish landings have declined to be less than 1 percent of what they were in the 1980s, he noted.

“We saw the nitrogen levels increase by up to 200 percent from that period to today due to on-site septic systems,” he added. “We saw the onset of brown tides, red tides, blue-green algae, rust tides, mahogany tides, all of which were contributing to the collapse of our industries. We lost our seagrass beds, we lost our wetlands.”

But in the past five to six years, the Bellone administration made water quality a top priority, according to Dr. Gobler.

“Today, there is no better program for installing advanced septic systems anywhere in the country than there is here in Suffolk County,” he said.

Kevin McDonald, the conservation project director for public lands at the Nature Conservancy on Long Island, was frank in his assessment of the importance of the legislation: “This is a significant monumental event in Suffolk County’s environmental history where for the first time, as a matter of policy, we’re not taking our pee and our poop and dropping it into a concrete hole in the sand that mixes with our groundwater. This is a dramatic improvement over Roman technology.”

Mr. McDonald said there are roughly 1,000 permits issued in Suffolk County each year for septic systems. He explained that, under the new law, that means the amount of nitrogen being put into the environment will be reduced by 20,000 pounds — about 10 pallets worth of fertilizer— in the first year, and that number will compound every year.

Mr. McDonald also said that when Kevin McAllister, the founder of Defend H2O, said years ago that this needed to be done, everyone laughed at him.

“Every great change and advance begins with somebody saying something that is laughed at by the majority,” Mr. Bellone said. “And it takes hard work and perseverance and dedication and guts to advance those ideas.”

Regarding the ability to install small sewage treatments plants with larger capacities in downtown areas, Mitch Pally, the CEO of the Long Island Builders Institute, said, “This is going to be a game changer for the development community in Suffolk County.”

It will also allow for the development of the type of housing that young people and seniors in Suffolk County want, he said.

Under the old law, small sewer systems serving a cluster of businesses and/or apartments could have a maximum flow of 15,000 gallons of wastewater per day. There were also setback requirements that made it difficult to site such systems. The new law allows 30,000 gallons of flow per day and reduces setbacks.

Peter Scully, who is the deputy county executive as well as Mr. Bellone’s water quality czar, explained in an interview Monday that the increased allowable flow and the reduced setbacks will allow for the redevelopment of properties that are not economically viable. With sewage treatment, the properties will be eligible for “wet uses,” such as restaurants, and for apartments.

Mr. Scully said the legislation was modified before it was passed to address concerns regarding costs to homeowners who may want to make minor changes to their homes to accommodate a family member moving in.

He said the adopted law states that only major home reconstruction of 50 percent or greater will trigger a requirement for an innovative/alternative septic system. Minor work will only require a conventional system that is compliant with the 1973 law.

An innovative/alternative septic system reduces nitrogen output by 70 percent or more, compared to a conventional system, Mr. Scully noted. He said that while the federal Environmental Protection Agency says septic tank effluent has 65 milligrams of nitrogen per liter, the county had found it often exceeds 100. An innovative/alternative system is required to reduce nitrogen to 19 milligrams per liter.