The September 8 North Haven Village Zoning Board of Appeals meeting. 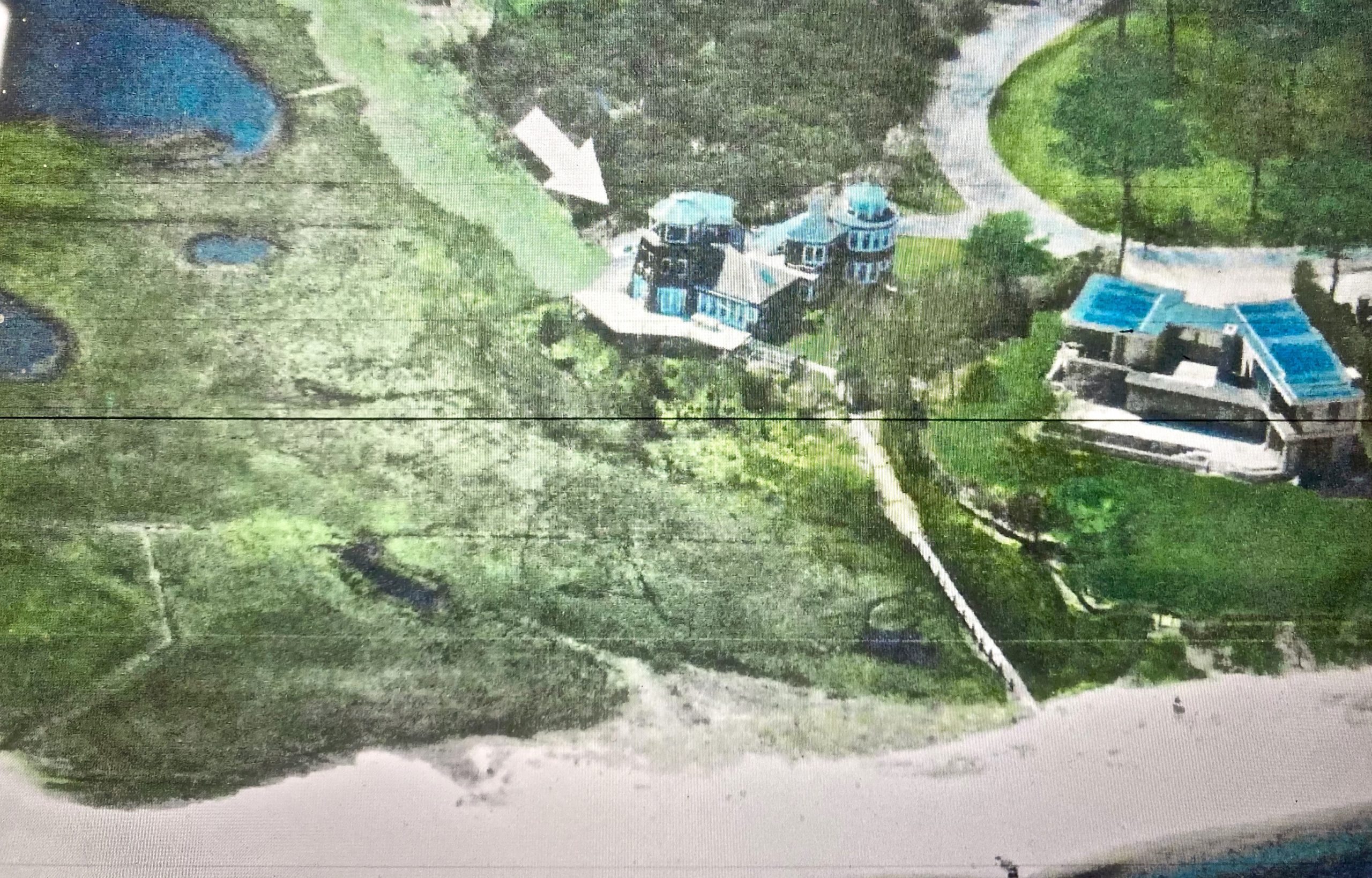 The white arrow points to 59 Mashomack, "Lighthouse." Dusenberry house is to the east. 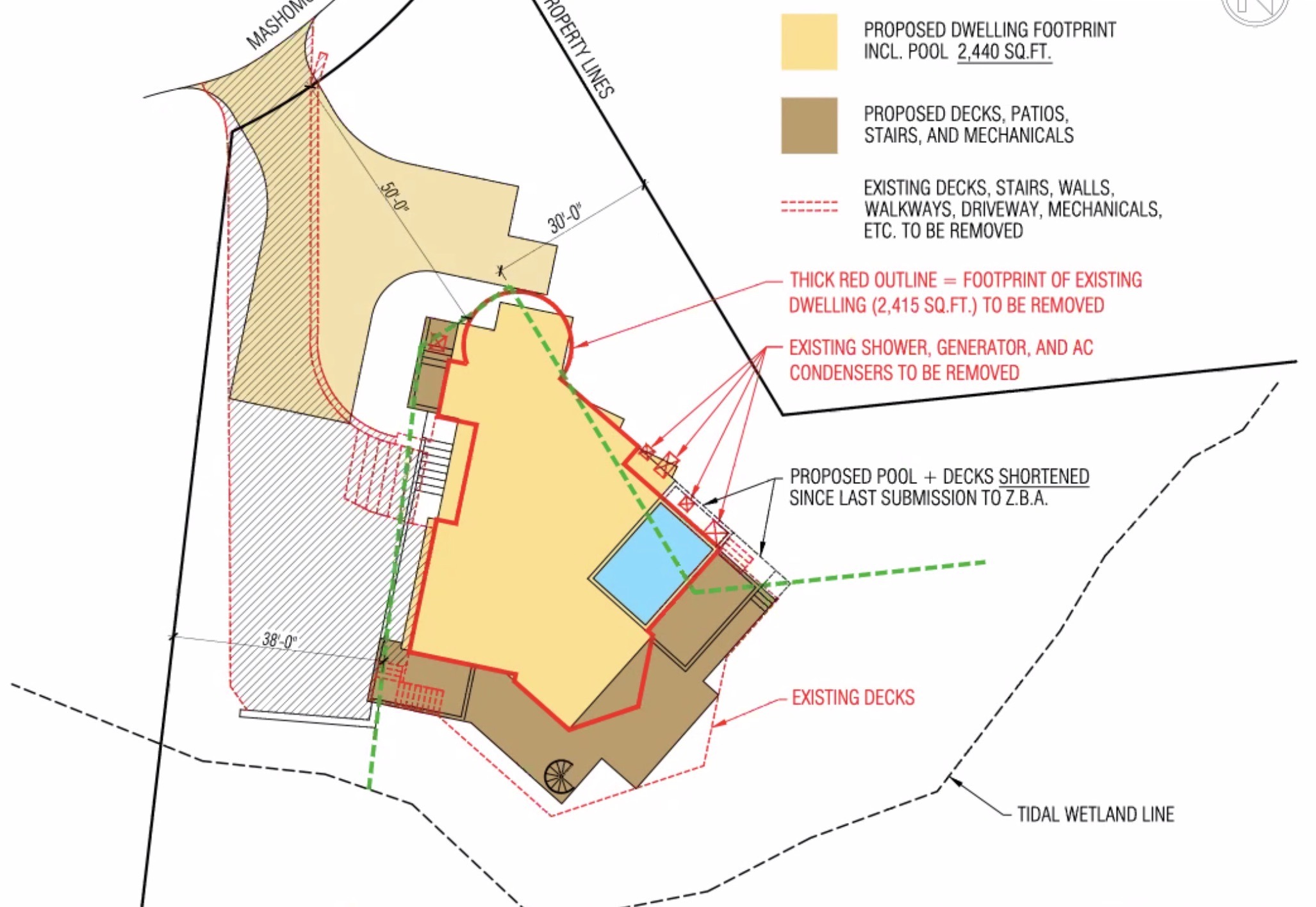 In a rare split vote, the North Haven Village Zoning Board of Appeals on September 8 voted 3-2 to reject local businessman Larry Baum’s controversial application for front and side yard variances to allow him to build a new house overlooking wetlands at 59 Mashomack Drive that would have a footprint 225 square feet larger than the house on the site now.

“I’m very disappointed,” Mr. Baum commented during the Zoom session during which the vote was conducted. “I don’t think the asks were that great.”

The North Haven resident, who lives two doors north of the site and testified he plans to move with his family to the new house, said the environmental benefits of the project would have far outweighed the impact of the variances.

In a related development, Mr. Baum on Friday withdrew his application to the North Haven Village Board for permission to build a dock off the property’s bay beach access point, which neighbor Susan Dusenberry and others opposed.

During the hearing on that case, Ms. Dusenberry’s attorney, Dennis Downes, presented a recent survey prepared by Michael Hemmer showing that the depth at the end of the proposed structure would not have met the village’s required 2.5 feet at mean low tide.

In the zoning case last week, Zoning Board of Appeals chairman Mark Poitras and member Scott Brooks voted against the denial resolution, which found that Mr. Baum had rejected the option of building “a slightly smaller structure needing no variances”; the resolution concluded that any zoning difficulty he faced was self-created. Voting in favor of denying the application were members John Fitzpatrick, Steve Hatfield and Steve Cox.

The board majority also found that the environmental benefits of the project, including a nitrogen-reducing septic system and improved drainage to prevent runoff from reaching nearby wetlands, were now mandated by village code and will be required for any new construction on the site. The existing house has a conventional, passive septic system close to the wetlands side of the property and no rainwater runoff control.

Mr. Baum’s application for variances to build the house, and its proposed dock, touched off an avalanche of emailed letters of opposition earlier this year, citing a threat to the adjacent wetlands.

During a hearing on the dock this spring, Mayor Jeff Sander called the site “a very unique property” because it bends sharply eastward after descending from its street frontage at 59 Mashomack Drive — where Mr. Baum plans to tear down the existing house and build a new structure — to run adjacent to the 60-acre Loveridge Preserve, a marsh and pond system protected by a conservation easement given by the Loveridge family in 1993 to the Peconic Land Trust.

Seemingly cutting off the bay frontage from the upland, the property’s bend puts the proposed dock “in front of the neighbor’s property,” the mayor said, on a now empty beach separating Shelter Island Sound from the Loveridge wetlands. Because of the conflicting survey depths, Mr. Sander called for the village to conduct its own survey, a move that Mr. Baum opposed.

After the results came in, Mr. Baum by email withdrew his dock application without explanation on September 11.

In the zoning case, Mr. Baum’s 404A Bay Partners LLC sought a front-yard setback variance from the required 50 feet to 45.9 feet and three side-yard variances from the required 30 feet at three points 21, 23.4 and 24.8 feet from the east property line with Ms. Dusenberry. The property contains 75,524 square feet or between 1.5 and 2 acres, some of it constrained by the marsh.

The proposed house was to have a footprint covering 2,440 feet; the existing structure, known locally as “the Lighthouse” because of its turret — which dates back to an earlier structure built in the early 1970s — covers 2,215 square feet.

The new structure, as originally proposed, would have required a variance from the village’s “sky plane” rules controlling height. It was redesigned during the application review process to eliminate any height intrusions.

The Zoning Board of Appeals majority found that the front-yard setback request was “de minimis” but called the side-yard variance requests “substantial,” averaging 30 percent of the required distance.

The majority noted that a slightly smaller house could be built on the site that satisfied all zoning requirements but “the applicant refuses to consider” that alternative, saying it would be impractical for him, his wife and four children. The requested variances, therefore, are the result of “a self-created difficulty,” the majority agreed.