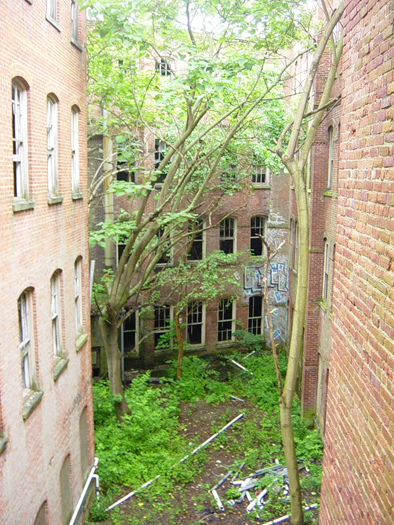 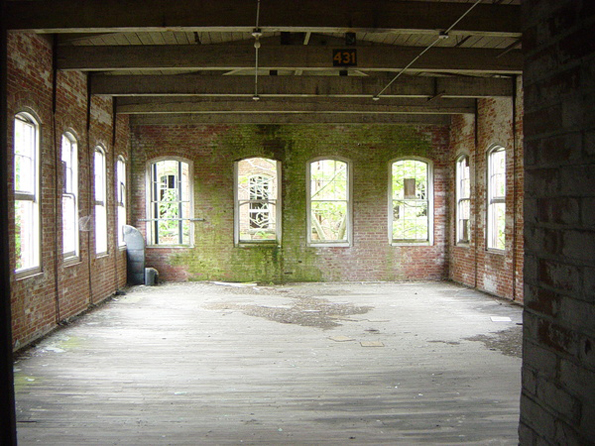 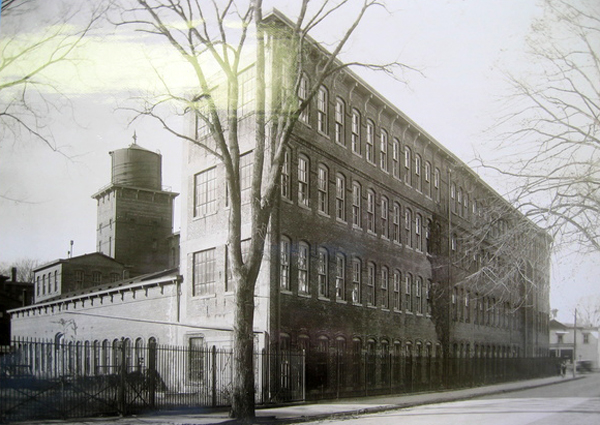 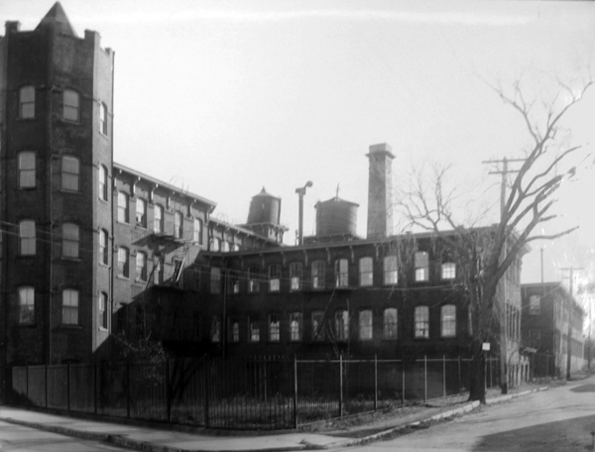 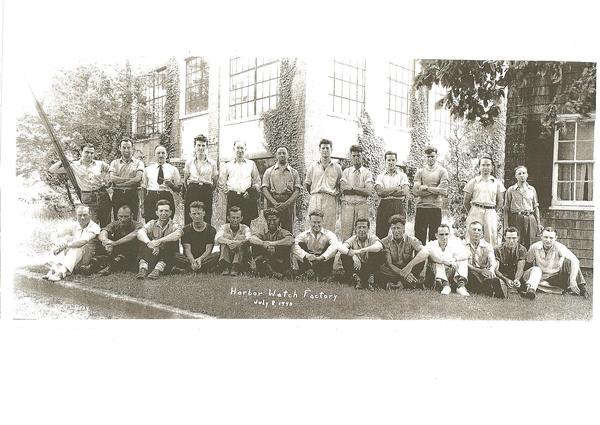 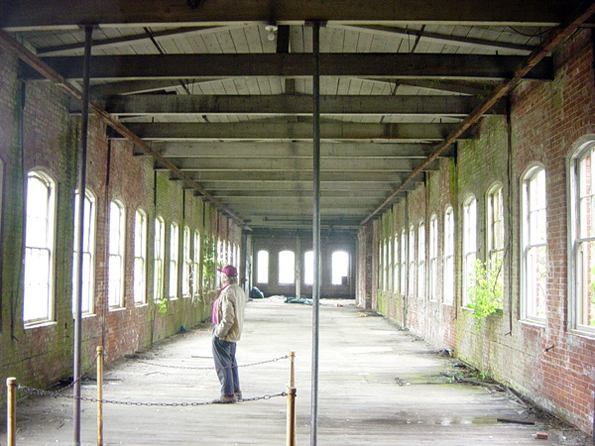 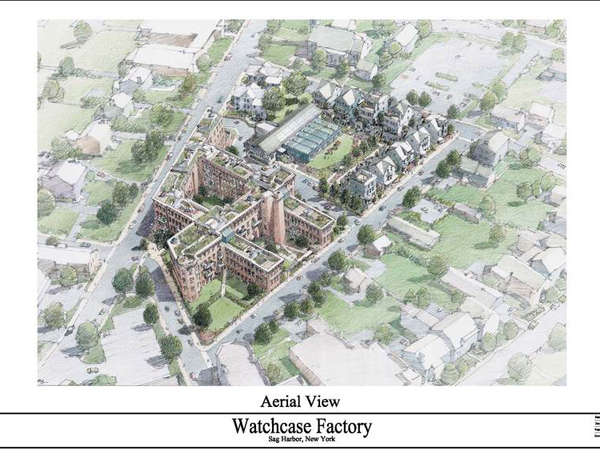 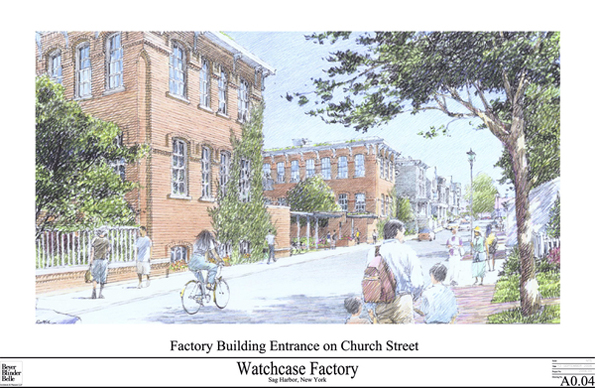 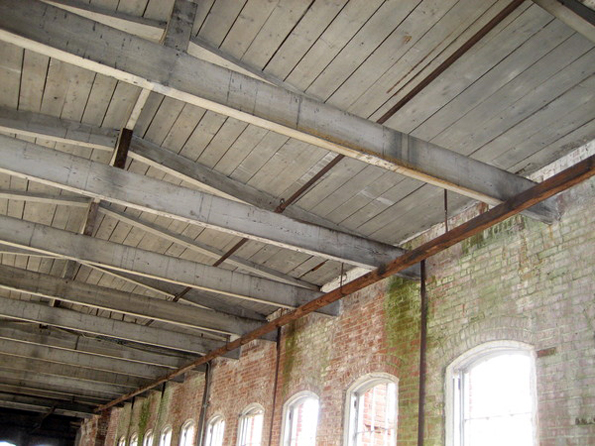 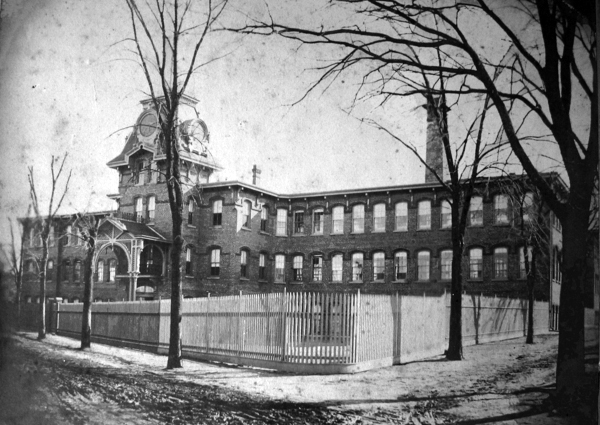 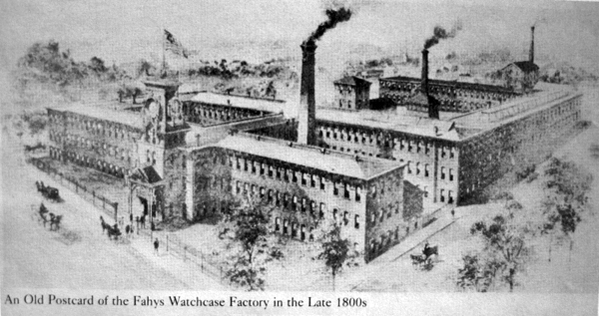 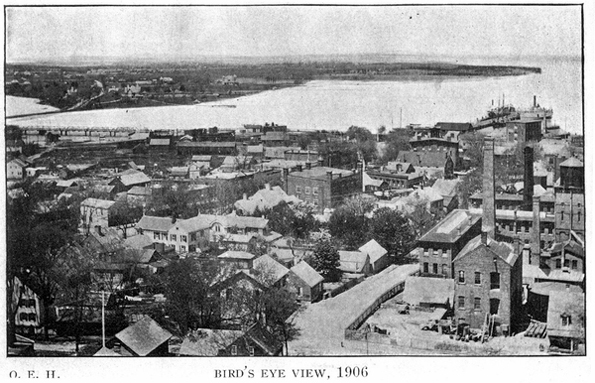 The former Bulova Watchcase Factory in Sag Harbor has been at the center of the news in recent times due to the environmental complications surrounding its past uses. But those close to the current redevelopment project—which just received a two-year extension by the planning and zoning boards—predict it will come into the spotlight in a more positive way, via the combined efforts of the design team that is looking to bring the building up to date while preserving its industrial identity and its historical contribution to the village’s past.

That’s exactly the sentiment reported by Nicholas Quennell, a Sag Harbor homeowner who is also the lead landscape architect on the project. His firm, Manhattan-based Quennell Rothschild and Partners, is now involved in the process of rehabbing the property.

“The first point is saving the building and treating the building with respect and love. The building is amazing,” he said during a recent interview. “We had a walkthrough and I had not seen all the interior spaces. It is not like a New York City loft space with a large open space that can be carved up, it is much more of a challenge for an architect.”

According to Mr. Quennell, all involved in the project are in agreement that the former factory has to be saved. But what do they need to do to convert the entire site into livable space built with 21st century design, construction and environmental concepts?

Because of his local ties and respect for the old factory in the middle of town, Mr. Quennell said he is happy to be working with Beyer Blinder Belle Architects, known as the foremost adaptive re-use architects in country.

It is not uncommon for industrial buildings like the former Bulova factory, which have outlasted their economic heyday, to be renovated and used for a mix of commercial and residential uses. However, no matter how romantic the idea is of honoring history and architecture, the design team has a lot of practical considerations to incorporate into their design solutions.

Part of the process for the developer, David Kronman of Cape Associates, was to attend numerous public hearings and to solicit community input, as the block-long structure is imbedded in a tightly-knit neighborhood and has a visual and physical impact that extends beyond simple traffic circulation. He reported that his company has a history of developing challenging sites similar to Bulova. One of those projects was an old abandoned building on St. Mark’s Place in Manhattan, which Cape Associates turned into apartments.

Mr. Kronman’s favorite parts of the job are finding creative ways to reuse notable old buildings by incorporating their historic fabric to create something else out of that canvas.

For example, in the Bulova building “there are still old vaults where they used to store precious metals, the rooms are built out of huge granite blocks. We are keeping those spaces intact for another use, perhaps a wine cellar,” he said. “They are on every floor of the building. There are old, yellow heavy timber beams in the ceiling that are the most beautiful beams you have ever seen. So instead of covering them up we are running all the mechanical equipment through raised flooring in order to keep the ceilings exposed.”

Revamping industrial buildings into other uses can succeed for many reasons. Among them are the high ceilings and large windows that were so important in terms of letting in daylight for production. They create wonderful interior spaces for living. Also, the buildings are often constructed with materials that would be prohibitively expensive today and so are desirable for mixed residential and commercial uses and also exhibition space for museums.

This trend can be seen in many areas that wish to preserve their architectural and industrial heritage. The DIA Art Foundation in Beacon, New York is a great example. This modern art museum is a converted 300,000-square-foot historic printing factory (once home to a Nabisco box-printing facility) which has vast interior spaces, perfect for large-scale modern artwork. Stained hardwood floors show evidence of past uses, and north-facing skylights allow the perfect light to view the true colors of the artwork.

In Guilford, Connecticut there are two repurposed buildings in the historic district—the red brick Spencer Foundry, which was renovated decades ago into apartments; and a granite building that used to house the Shoreline Times newspaper, which has just been redone into residential space as well.

Put simply, when done well, reuse is about maintaining these elegant old buildings as a part of the small town’s history and preserving the architectural styles from another era in keeping the character of a place alive.

Sag Harbor has its share of spectacular buildings that have already been converted to new uses. The former Masonic Temple is now the Whaling Museum. And several churches in town have been renovated into living space. The movie theatre may be next, though just about everybody agrees that the art deco sign on the facade contributes to the wonderful ambiance of Main Street.

For Mr. Kronman, there are many aspects of the Bulova Watch Case Factory that possess charm, particularly an exterior area that can be viewed from inside the building.

“There is this kind of magical interior courtyard space,” he said. “We are demolishing a newer wing to open up that space, so you can walk through the courtyard at the ground floor level. Some units will be accessed only through that separate courtyard within the factory building.”

As with many other former factories, Mr. Kronman said that he found that he wanted to “embrace the natural light,” adding that there are more than 700 windows in the building. He also noted that using the courtyard for separate entryways would eliminate the need for some interior hallways, which would cut the window exposure in half. Additionally, the new residential spaces will be designed to have two to three sides illuminated with natural light.

But how to divide the new living spaces are not the only challenge for those who have signed up to repurpose the old factory. There is a particular interest for those who live in the immediate area of this city block-sized project close to Main Street. Neighbors have turned out for numerous meetings regarding its development. And so far Cape Associates has demonstrated that they really do want to integrate the site back into the neighborhood rather than make it a gated community.

The architectural plans, which have basically been ironed out already, call for restoration of several elements of the building that were removed at one time, not only for decorative purposes but also to relate the building back to its original state. The cornice—which was taken down from under the eaves—and several towers on the roof that were eliminated over time may be added back onto the structure in order to replicate an older industrial water tank look.

Landscape architects Quennell Rothschild are focused on incorporating rooftop terraces that overlook the Sag Harbor skyline, and the harbor, as well as redevelopment of the corner lot on Water Street as a park. Though it is not planned as a public park, the area will improve the streetscape by allowing views through wrought-iron fence, as part the original building’s character. The plan is to create visually pleasing site lines or view sheds into the new complex from the surrounding neighborhood, while maintaining privacy for the people who live there through a series of shared views.

The proposed pool area will be closer to Church and Sage streets. This too will be a private area for residents, but the landscape will be open to public view from the street.

In place of the existing parking lot, there will be a wide open lawn area. Future parking will be underground, maximizing the lot’s space for landscaped living areas. This idea alone deserves praise as too much valuable area is so often dedicated to where we park our cars, adding nothing to the beauty of our lovely East End villages. Parking was also a focus of the community groups, whose members presented parking and traffic circulation to the developers as part of their concerns.

How this project will mesh with the existing neighborhood has been a continual focus for the design team, the village and the developer. The drive that cuts through the site now to Church Street may become a through street that could also have street trees and a view of the interior terraced gardens that lead up to the pool building. The design team and Cape Associates have said that they hope to re-create a sense of neighborhood within the complex, while incorporating it into the village at the same time.

The design process is now in the early days, and all the details have yet to be realized, let alone constructed. But for Mr. Quennell, the project is of special interest not only as he has a home in Sag Harbor, but because of the relationships he has forged with the rest of the design team, village officials and other Sag Harbor residents.

“The combination of a really imaginative and energetic client who isn’t just in it to make money but really would like to do a good job, that was really magnificent,” he said. “We went to a lot of community meetings. People in the village recognized that this was going to save the building and everybody loves it.”