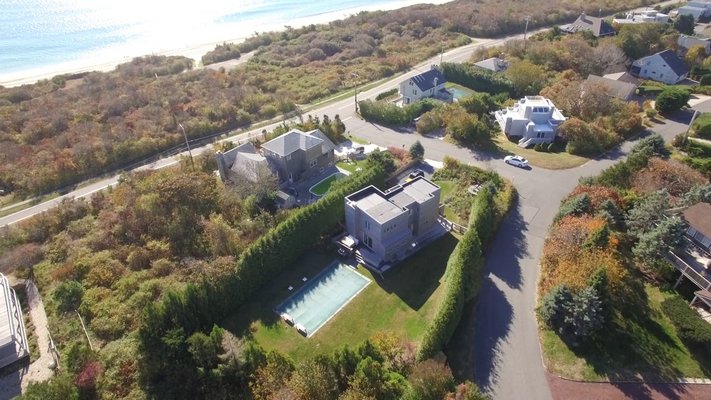 It’s that time of year for a political power couple to hit the Hamptons. This time, however, we’re not referring to Bill and Hillary Clinton, who are otherwise occupied. After handing over $2,525,000, Jonathan and Debbie Rosen are taking possession of a house on Franklin Drive in Montauk.

Both are executives in BerlinRosen Public Affairs, founded 11 years ago by the 38-year-old Jonathan Rosen and Valerie Berlin. The company’s biggest coup to date was playing a big role in getting Bill de Blasio elected mayor of New York City, but that achievement was far from the only one.

The house the Rosens recently purchased in Montauk is across from the ocean beach in Hither Hills. A modern cube design, the 2,000-square-foot house on a 0.29-acre parcel has 4 bedrooms, 3 baths, and is elevated enough to spy on some of the surfing action below. Outside features include plenty of decking, a pool, abundant shrubbery, a dining area, and a double outdoor shower.

BerlinRosen made its bones representing political clients. Various New York city and state lawmakers are on its client list, including Attorney General Eric Schneiderman. However, on the other side of the ledger, Sheldon Silver, now a former client who was once the State Assembly speaker, received a 12-year prison sentence this past May after being convicted of numerous crimes and misdemeanors. The firm is not all politics, though. Among its other high-profile clients are the Elton John AIDS Foundation, Ford Foundation, MacArthur Foundation, Samsung, Cornell University, and the Southern Environmental Law Center.

But BerlinRosen’s biggest splash was made in 2013. According to Bloomberg.com, “As Bill de Blasio weighed a longshot run for New York City mayor, he needed help from people who shared the self-described activist-progressive views. He found it in a political consulting firm, hatched in a Manhattan sublet, where many on the staff are closer in age to his children than to him.” The firm, it was reported, has “built a reputation working behind the scenes for Democratic candidates and causes such as paid sick leave, limiting police stop-and-frisk tactics and universal preschool.”

Mr. Rosen grew up as a political junkie. His first campaign was to help get the mayor of Cherry Hill, New Jersey re-elected—Rosen was still in high school, and his campaign HQ was his parents’ living room. Presumably, while he and his wife are enjoying their new Montauk manse, the living room will remain a living room.