Potatoes Inspired A Wave Of Migration On The East End 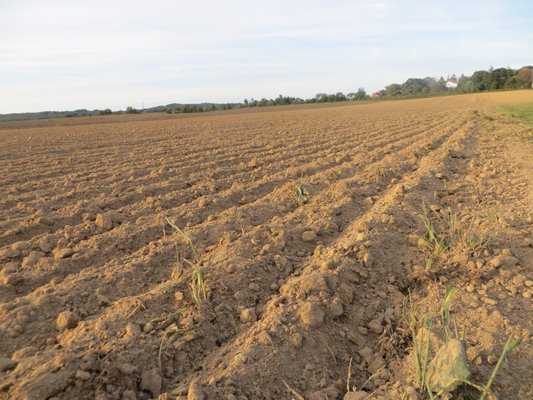 Motivated by relatively well-paying work, many migrant workers settled on the South Fork from the 1920s until the late 1960s, mostly to work on potato farms. Henry Haney, who’s now a prominent member of the East Hampton community, estimated that he earned three times as much money on eastern Long Island as he had in Florida, saying the work here “was plentiful compared to where we were coming from.”

Growing up in the Mississippi Delta in the 1930s, Mr. Haney recalls working at age 7, mostly in cotton fields. Looking at a future of manual farm work that paid little, he moved to Florida as a migrant worker, eventually migrating to East Hampton in the 1950s. By 1954, he had settled permanently in this area, happy to have better paying work that offered a future.

“[The] Wesnofskes were famous, that’s why they had so many people, they paid $2 more than anyone else,” said Bonnie Jones, who has worked as a potato grader on and off for more than 20 years. A member of the Shinnecock Indian Nation, she is retired but still grades potatoes on the Remi Wesnofske Farm in Bridgehampton.

Bridgehampton farmer Tom Halsey recalled when an independent crew of 10 to 12 migrant workers harvested potatoes by hand on his farm in the 1950s and 1960s. By the 1970s, four of Mr. Halsey’s former migrant workers were working full-time on the farm, cutting potatoes in the spring and, in the case of the men, working in the shop during the winter. “They stayed because we had work for them,” Mr. Halsey said.

Although potato-picking was mechanized in the early 1970s, grading potatoes remained labor-intensive and so, according to the 1974 book “The Other Hampton,” there was still a labor force of 2,000 migrant workers who would travel to the East End from August through November in that decade.

“We used to travel to Alexandria [Virginia}, we went to Williford [Arkansas], we did potatoes all over,” said Ms. Jones, who would travel up and down the coast grading potatoes with her late husband, who was the captain of a grading crew.

“There are only two potato graders that I know of now—Wesnofske and Foster. Years ago, there were 10 or 15,” Ms. Jones said. “There were so many potato graders, you could go anywhere to find a job.”

Mr. Haney said many people think migrant workers were African-Americans, but that that’s not entirely true. “It was Jim Crow,” he conceded. “Things were difficult in the South.”

However, he said many Southerners of lower socio-economic backgrounds, both African Americans and Caucasians, were forced to find work elsewhere as technological developments in agriculture in the 1950s diminished the need for a large manual labor force. “People were leaving the South really rapidly,” he said.

“Bridgehampton was more of an agricultural hub,” said Mr. Haney, who recalls being one of 12 migrant workers on the Ferris Talmage’s Farm in East Hampton. They lived on a camp on the property and were able to work elsewhere when there wasn’t work on the Talmage farm. Most important was that they were independent workers, as some of the crew leaders, mostly in Bridgehampton, were “more abusive” in the 1950s and 1960s.

“A lot of the help there was near hopeless and abused by crew leaders,” said Mr. Haney, who believes that by the late 1960s, the abusive practices had stopped.

“There was a terrible fire … children were killed in Bridgehampton, living conditions were terrible,” said Julie Greene, archivist and curator at the Bridgehampton Museum, about a fire at a labor camp about half a century ago that killed at least 12 migrant workers and two children. Afterward, the Bridgehampton Child Care and Recreational Center was created so that migrant children could have a place to go to while their parents worked. “The Center” is an active part of the community in Bridgehampton.

“We weren’t subject to that in East Hampton. We were treated like we were at home,” Mr. Haney said.

Mr. Haney founded his own landscaping company, “Henry Haney Maintenance,” in his late 30s. “This is what makes East Hampton what it is,” he said of a pool of fellow migrant workers who also founded their own businesses on the South Fork. “In 25 years, you paid for your home and sent your kids to school,” he said.

Mr. Haney never wanted to move back to Mississippi, settling permanently in East Hampton, where today he is a former member of both the local Democratic and Republican parties, as well as an active member of his church and host of two TV shows, “Tell It to Henry” and “Henry on Location.”