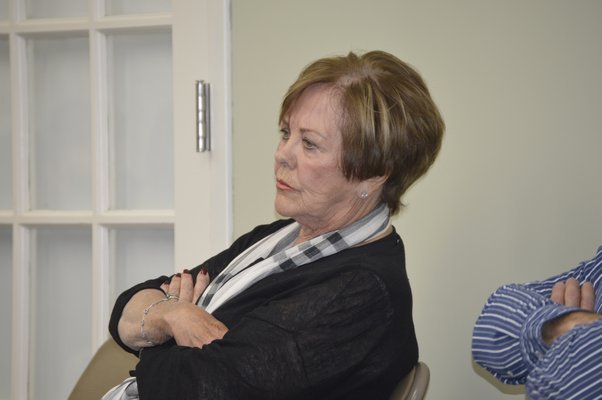 When Carol Konner told community members at a recent Southampton Town Board meeting to be careful what they wish for, she meant it.

The words rang true last Thursday, May 19, when the main developer and property owner behind the proposed Bridgehampton Gateway project informed town officials that she is no longer interested in moving forward with a town-initiated planned development district proposal targeting a site across Montauk Highway from the Bridgehampton Commons. Instead, Ms. Konner said she will look to develop the 13-acre property under its current highway business zoning.

The PDD would have permitted a blend of different uses at the site that are blocked by the existing zoning, in exchange for community benefits.

“I am withdrawing my support for the town’s initiative after three and a half years as it relates to the PDD,” Ms. Konner said. “It is a delay that I didn’t have to have—I could have just gone through with present zoning with the Equinox,” she added, referring to the 27,000-square-foot luxury gym that is the centerpiece for the site. Her proposal for that development was filed with the town three years ago, and she said she will “activate” that application now.

Southampton Town Supervisor Jay Schneiderman confirmed that “there is no point” in pursuing the PDD at the Gateway if Ms. Konner is not interested.

As for the remaining square footage at the Gateway, Ms. Konner said she is not yet sure of what will take up the space, which she has paid $1.5 million in total for over the past three years. The Carvel that is already located on the site will remain, she said, though “it won’t take on the same form, but it will always be there unless the tenants want to leave.”

Although the Planning Board can control how the parcels look, household appliance stores, radio and television stores, as well as auto and home supply stores are all allowed in highway business zones, according to the town code. Car dealerships and fast-food restaurants are permitted, though they would require a special exception permit from the Planning Board.

Ms. Konner declined to comment on whether her plans will include either market-rate or affordable housing, a key part of the PDD proposal.

Planning Board Chairman Dennis Finnerty said that the PDD did seem to be an “intensive use,” but it is unfortunate that the site will be developed under highway business zoning, as it “doesn’t lend itself to Bridgehampton, unfortunately.”

It is also interesting, he said, as the Bridgehampton community had initially rallied behind the PDD proposal, in stark contrast to the intense opposition that was formed against it earlier this year.

“At first, residents were pushing for the PDD so they could land the CVS and get it out of their downtown,” he said, referring to opposition to having the pharmacy giant on the corner of Montauk Highway and the Bridgehampton-Sag Harbor Turnpike. The Gateway PDD had been suggested as an alternative site for the CVS, as the special zoning would have allowed for the retail use there.

There is also an advantage with PDDs, Mr. Finnerty said, as there is a coordination between all of the separate parcels on the property, which is difficult to achieve otherwise.

Nevertheless, he said the Planning Board would want to see how Ms. Konner plans to develop the entire 13-acre property under existing zoning, and how the nine different parcels would be interconnected, before approving a singular application for the Equinox.

Town Planning and Development Administrator Kyle Collins noted that there are two separate entities that own all of the parcels, though the Konners are a common party in both: Strawberry Fields LLC, which owns about 3 acres on the western side of the property; and Konner-Friedlander, which owns about 10 acres, including the proposed Equinox site on the eastern side.

“The build-out that they have to show on the Equinox one is only going to be the build-out on Konner-Friedlander,” Mr. Collins said, adding that the Equinox, as currently proposed, does not conform under current highway business zoning and would require size limit variances from the Zoning Board of Appeals. The maximum size of a building on a single lot there is 15,000 square feet, Mr. Collins said, but the Equinox is currently planned as two buildings, one that is 13,000 square feet and the other that is 14,000 square feet—which would not be allowed, because they are being used by the same vendor.

“If there were two different buildings that had separate tenants and uses … but you can’t circumvent maximum size limit and have the same use,” Mr. Collins said.