Push For Farm Workers’ Rights Could Have Consequences For Both Sides 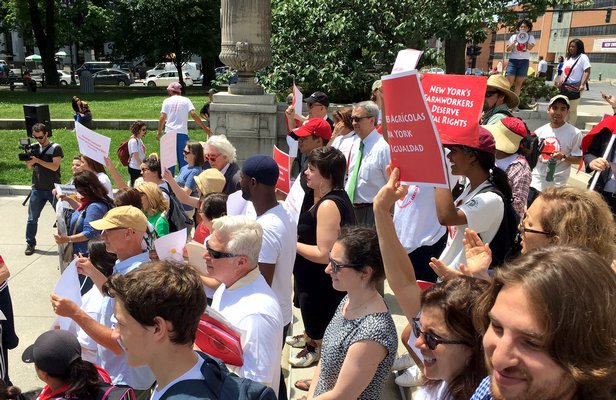 Marchers advocated for farm workers' rights on the steps of the State Capitol in Albany last month.

It is nearly a month after an 18-day march from Smithtown to Albany that drew hundreds of farm workers from New York, including eastern Long Island, and optimism for their cause remains high.“It doesn’t have to be workers versus farmers. We can all adjust and build a sustainable agricultural industry,” said Katia Chapman, education coordinator at the Rural and Migrant Ministry, a nonprofit organization that organized the march, this week.

Although the bill that they were marching in support of—the Farm Workers Fair Labor Practices Act—died in committee a few weeks later, organizers, politicians and activists believe that the momentum and awareness will live on.

Describing the bill as a mechanism that can provide “institutional backing” for workers, Ms. Chapman said that organizers will focus on “less splashy and more persistent” endeavors in future months.

Among other things, the bill seeks to grant collective bargaining rights, overtime pay and at least 24 consecutive hours of rest each week, if a worker wants that. These rights—which are standard for most American workers—were left out of the Fair Labor Standards Act in 1938.

“This is about bringing basic rights to farm workers which every other worker has,” said a spokesperson for Senator Adriano Espaillat, who sponsored the bill.

“They can’t quit their jobs because it is a nice job. They can’t report to the police because they are afraid,” said Martha Maffei, director at Sepa Mujer, an organization dedicated to Latina immigrant rights on Long Island. “They basically can’t speak about it.”

Although exact numbers are unavailable, female farm workers have shared experiences of sexual harassment in fields and nurseries on the South Fork with Ms. Maffei. She believes that legislation like the farm workers bill, as well as education around worker rights, would help to empower women when it comes to these issues.

New York State defines agriculture loosely, to include traditional farms as well as nurseries, vineyards and equestrian farms. Landscaping is not encompassed, although some day laborers work in both industries.

While most employers treat laborers fairly, many workers and activists feel that a power imbalance between employers and workers exists, allowing a few bad actors to take advantage of vulnerable populations.

“I don’t want a problem with the US,” said one Guatemalan worker who has been in the United States for four years and asked that his name not be used. Although he mostly finds work as a painter, he has worked on East End vineyards a few times, as well.

In his two years of working on the East End, he has been shorted his pay three times, once for 15 days of work. He didn’t report the employer because he was afraid.

“Everybody is looking out for the workers, but who is looking out for the farmers?” asked Rob Carpenter, administrative director at Long Island Farm Bureau. Pointing out that there are already three entities that monitor farmers’ treatment of employees on the county, state and federal levels, Mr. Carpenter said that the existing regulations are choking the industry already, to say nothing of the proposed bill.

Mr. Carpenter thinks “there is a perception that farmers are slave drivers, working [their employees] 18 to 19 hours a day,” when in reality, he said, many owners are right out in the fields along with their workers.

Antonio, who has attended Rural And Migrant Ministry events and asked that his full name not be used, works in a North Fork nursery that has branches on the South Fork as well. During the busy season, which lasts five months of the year, he typically works 58 hours week, and for him, overtime pay would be a significant bump in salary. He doesn’t have health insurance and although his workplace is fine, he said there is a feeling of racism against Hispanics and verbal abuse from upper management.

“A lot of the issues around labor are so connected to immigration,” said Nathan Berger, Long Island outreach coordinator for the Rural and Migrant Ministry.

Whether workers are legally able to work in the United States or not, the threat of deportation hangs over the whole Latino community, making many fearful of their bosses. For this reason, Mr. Berger feels that collective bargaining will empower workers to speak up against unfair practices.

Of those who were polled, the South Fork’s traditional farmers reported hiring only documented workers. They said they worked with the same individuals for many years and find the proposed legislation to be overly burdensome.

“Strawberries aren’t going to wait on the vine to be picked,” said Mr. Carpenter, making the analogy that since farm work deals with a perishable good, employees shouldn’t be allowed to strike, as it could be devastating to the industry.

In a state where the average cropland harvested per farm is 142 acres, the average cropland harvested per farm in Suffolk County is 44 acres, meaning that traditional farms are, on average, much smaller. With the rising cost of land, South Fork farmers also feel the squeeze from offering higher wages, saying that it is already difficult for them to pay competitively, when other seasonal jobs in restaurants or landscaping can offer much more.

“We are paying top dollar for farm workers, compared even to Riverhead,” said Adam Halsey, a 12th-generation farmer who is active in the agricultural community on Long Island.

Many farmers report paying more than $15 for skilled laborers, and although that puts them above the state’s new minimum wage, which will go into effect incrementally over the next five years, they worry that, with mandated higher wages and proposed overtime pay, they will have to go out of business, or turn to increased mechanization.