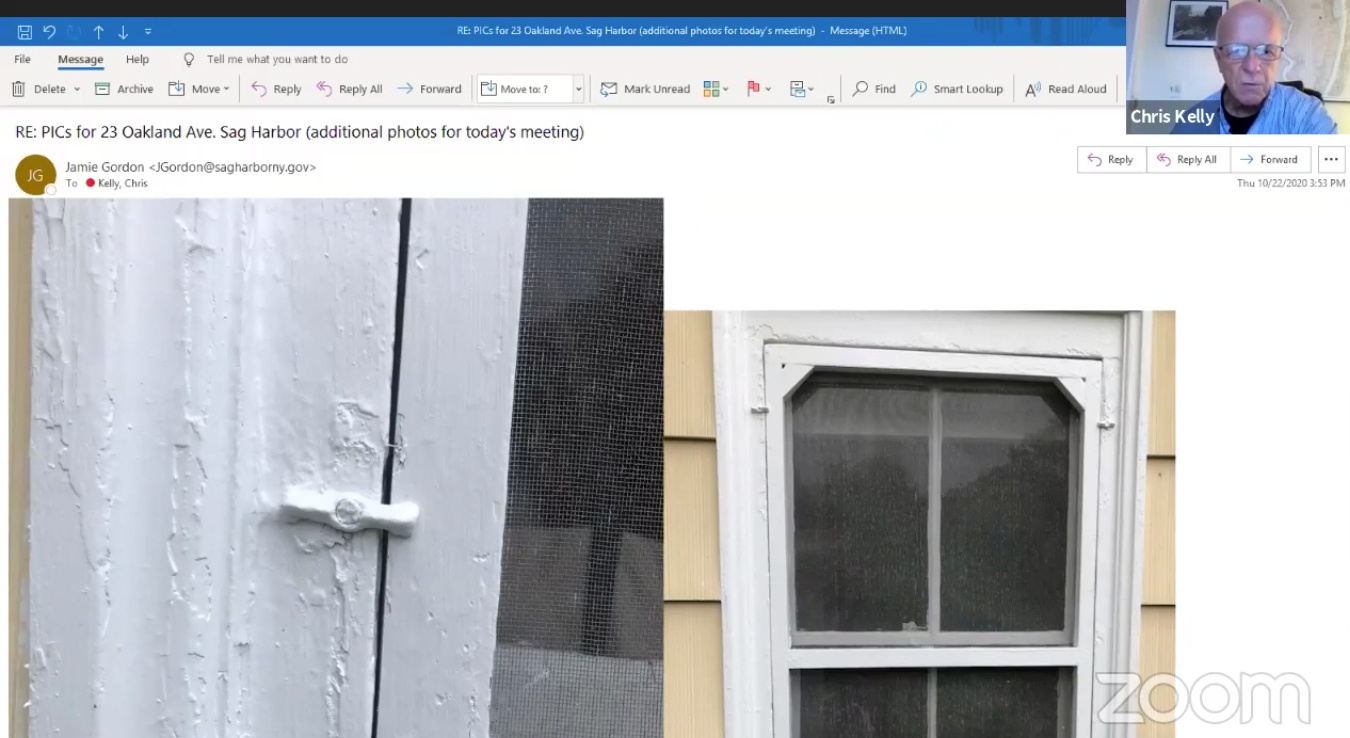 A request to replace a protected home’s inoperable windows with working replicas sparked a debate over prioritizing fire safety during the Thursday, October 22, virtual meeting of the Sag Harbor Village Historic Preservation & Architectural Review Board.

Bonnie and Chris Kelly wish to put new siding on the house at 23 Oakland Avenue and to install Andersen windows in place of the windows there now that appear to be many decades old. For Chairman Dean Gomolka, removing historic windows that could be repaired was a nonstarter, but Mr. Kelly raised evacuation concerns that board members were sympathetic to.

The board’s historic preservation consultant, Zachary Studenroth, who had visited the house prior to the meeting, told the board that the window sashes appear to be original to the house. However, the ropes for the counterweights have been removed, he pointed out, so the windows are no longer operable.

“I am recommending that the windows be refurbished and retained,” he said.

Mr. Kelly said the plan is to cover the original siding with Tyvec then put on wood shingles that will conform to the New England style of the neighborhood. For the windows, he wishes to install wood-paned replicas that he says are identical to the existing windows.

“Let’s just pull back a little bit, because we’re in the preservation business,” Mr. Gomolka said. “So unless you have an argument to why these windows cannot be repaired, the only second step we can do is meet at the site with a builder and our consultant and a couple of members to look at these windows.”

Mr. Kelly said he and his wife do wish to preserve the house, and have no plans to sell it.

“These windows are extremely hard to open, and the expense to do the things that Zach is recommending, while I understand that, it’s expensive,” he said. “The other issue we have here is our grandchildren stay in this house all the time. They’re small little boys — 5 ½ and 9 ½. If there was ever a fire in this house, downstairs or upstairs, and they had to exit out of this house, they would never be able to open these windows.”

He added that the same would be true of an adult trying to exit out a window.

“We’re at an impasse here, sir, because it’s under, I guess, our purview here to preserve the windows of Sag Harbor,” Mr. Gomolka said. “There are hundreds of houses here in Sag Harbor that are in the same predicament. And what they do, because these windows are so old, they refurbish them and they fix them.”

Mr. Kelly said other homeowners have been able to replace old windows, and he wanted to know, “How do all the other homes in my neighborhood have this done?”

Mr. Gomolka said that, if that is the case, it could be illegal.

“Nobody is going to know the difference, from the road or anywhere else, if these are historic, 100-year-old windows or not,” Mr. Kelly said. “They are going to look exactly the same, and they’re going to be safe.”

Vice Chairperson Bethany Deyermond asked Mr. Kelly what kind of windows he planned to use and if they would be wooden true divided light windows.

Mr. Gomolka interjected: “It doesn’t matter what he wants to put in — if they are the greatest and latest things on the planet — but we’re here to preserve these old buildings in Sag Harbor.”

Elizabeth Vail, the board’s attorney, advised that Ms. Deyermond, as a member of the board, has the right to ask questions.

Moving on, Mr. Gomolka suggested the board approve the siding that night while putting off a decision on the windows so they could look further into the matter.

Mr. Kelly said he has owned and restored other houses, so he already knows that the windows can be restored, but at great expense and labor.

Mr. Gomolka then polled the board members about the siding — which they were all happy with — and the windows.

Ms. Deyermond said she did not oppose allowing Mr. Kelly to put in new wooden windows.

Judith Long said, “I’m afraid I’m a stickler on windows, and I would vote to restore those windows.”

“I think Mr. Kelly brings up a valid point about fire life safety issues,” Steven Williams said, “and I think maybe we should write to the secretary of the interior about this, because there’s no going back. I’ve developed a lot of houses and homes in New York City, and government buildings, and I am a real stickler for fire life safety. I think nothing supersedes that. Mr. Kelly, I think your comments are cogent, but I do agree that right now we are hamstrung.”

Val Florio said they should look closely at which rooms require egress and find a happy medium.

Mr. Studenroth offered that not every window would need to be restored, and that the expense of fixing a few could be cheaper than full replacement. He noted that the upper window sashes are fixed in place, by design, so it is only the lower sashes that would require repair.

“You, of course, are not a board of ‘what does it cost, what does it not cost,’ but on a practical level, not all of those lower sashes would have to be made operable to provide the homeowner with the requisite exit strategies, which of course are extremely important,” he said. “But cleaning the lower sashes of paint and rehanging them on cords, I should think would be less costly than replacing the entire unit with a well-designed replica.”

The board went ahead with a unanimous vote to approve the siding replacement, while leaving the question of the windows for another time.