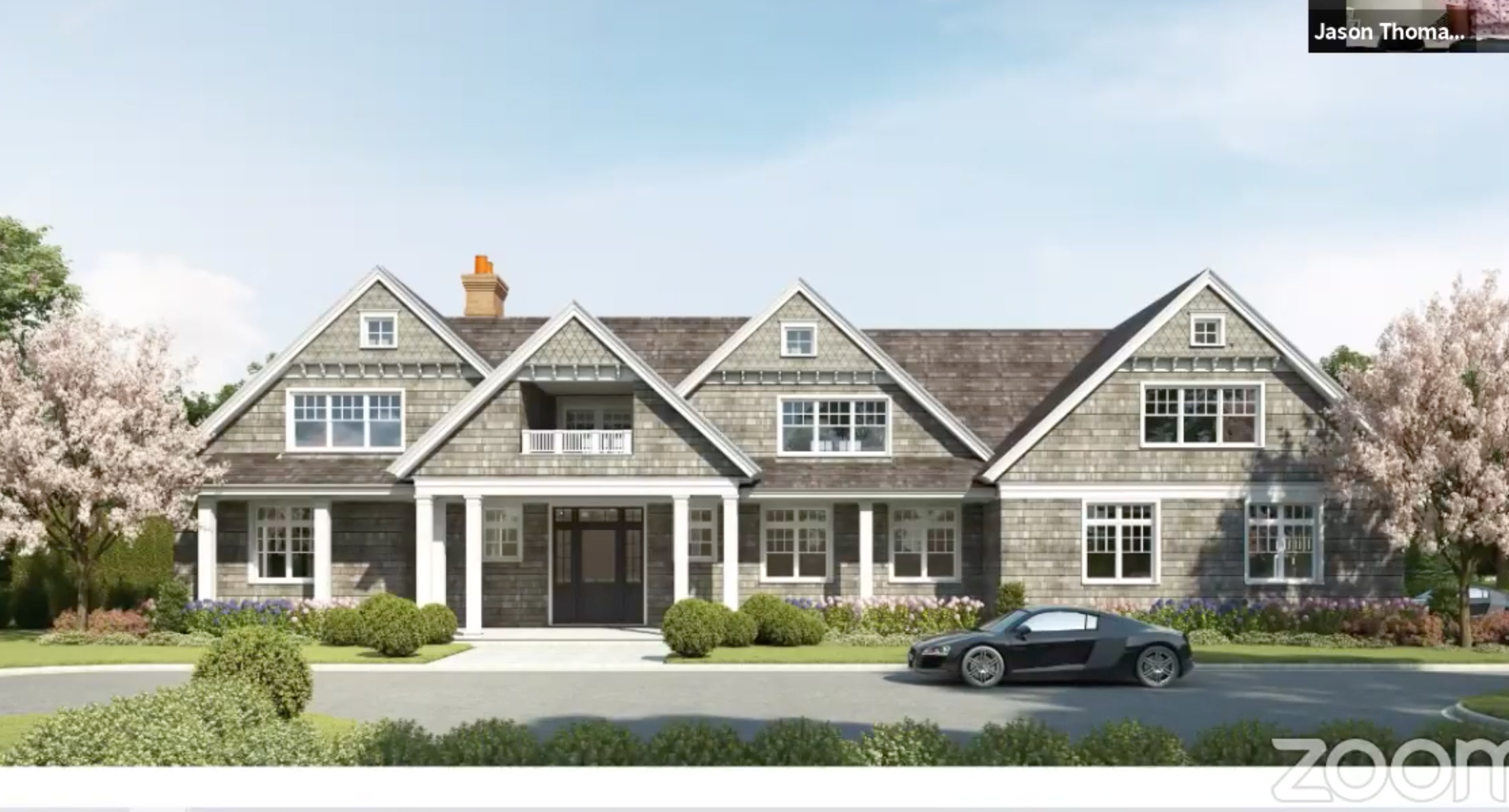 Architect Jason Poremba presented plans for 354 Madison Street to the Sag Harbor Village Board of Historic Preservation and Architectural Review on July 23.

The Sag Harbor Village Board of Historic Preservation and Architectural Review sent plans for a new home on Madison Street back to the drawing board for a second time, finding the revised design to be inappropriate for the village and “imposing.”

Lonny Schwartz and Bonnie Klapper wish to demolish the existing house at 354 Madison Street — a nearly 1-acre parcel that backs up to Suffolk Street — and build a new home with a pool and pool house. Ms. Klapper addressed the board during its Thursday, July 23, virtual meeting and expressed her disappointment in how the original plan was received

“I listened to your last meeting, as did my husband, and I want to tell you we were heartbroken,” she said. “We love Sag Harbor, and if we ever dreamed that we had designed a house that you so obviously disapproved, we would never have submitted.”

Jason Poremba, the principal of Jason Thomas Architect in Southampton Village, first presented plans for 354 Madison Street to the board on June 11. He had designed a 4,825-square-foot gambrel house, which the board objected to.

“This is in the vein of a Francis Fleetwood shingle-style home,” Chairman Dean Gomolka said during the June 11 discussion. He questioned how the design relates or works with other houses on the street.

Mr. Poremba, who shared that he, in fact, worked for the late architect Francis Fleetwood for seven years, said there is a “mixed bag of architecture” on the blocks around the site. He said this project has traditional details that tie into the village, but still is its own thing and does not pretend to be part of the village’s historic district.

Board member David Berridge added, “The gambrel house sneaking into Sag Harbor, it’s a little bit like the COVID virus — and I take that very jokingly. I hold the architecture of Sag Harbor dear to my heart.”

Responding to that remark, Mr. Poremba said, “I’ve never had my work referred to as a disease.”

He agreed to abandon plans for a gambrel style home and come back with a new approach.

“After reviewing your comments the last time, my husband and I spent weeks walking up and down Madison,” Ms. Klapper said at the recent meeting. “We went back to ground zero, to the drawing board.”

She noted that the gambrels, shutters and screen plantings have been removed to satisfy the board. “Someone didn’t like shutters — there’s not a shutter to be seen on the drawing,” she said of the updated plans.

They also worked with their landscape architect to save as many trees as possible, she added.

Mr. Poremba said, in being sensitive to the board members’ comments from the last meeting, the new design uses gables, which he said are more typical of Sag Harbor.

“I ripped off the top of the house from the first-floor ceiling up and we redesigned the whole roof,” he explained. “And through that, we actually reduced the scale of the house. The gross floor area is down close to 100 square feet from the previous proposal, and the overall mass as well has decreased.”

He shared renderings of the proposal and said he is seeking the board’s blessing on the “gables solution” so he can proceed to creating actual construction documents.

While the board members did prefer the gables to gambrels, the board’s blessing on the project overall was not forthcoming.

“This is a house that really belongs in the potato fields,” Mr. Berridge said, a reference to areas outside the village where large estates are built on flat subdivided land. “And the site on Madison and Suffolk, it’s a very heavily wooded site with some very diverse topography.”

Member Judith Long said the site reminds her of the medical complex where she goes to see her doctor and it has an “institutional look” that she wants softened.

The size of the house became a point of contention.

She said it’s “unfathomable” that a larger, more imposing house that “looks like a huge plantation house” was built across the street from the site where her house is proposed.

“Most of the properties along the street are a half-acre,” she said. “This is almost a full acre. So you cant expect us to put a house that’s similar to the houses that are on a half-acre lot, on an acre lot — for resale value alone — and it would actually look silly if we had a tiny little house in the midst of this.”

However, Mr. Gomolka noted that the board did not approve that house across the street and disagreed with Ms. Klapper’s assertion that his board is bound by the precedent. He said the board can determine whether the proposed scale of a house is appropriate for the streetscape.

Ms. Long suggested the house be less wide when viewed from Madison Street, and instead go back farther on the property.

Ms. Williams said the way the entry is projected outward from the rest of the facade might be contributing to the “institutional look” and its “aggressive stance.” He also suggested lowering the roof of the garage, which Mr. Poremba said was possible because there is no living space above the garage.

Vice Chairperson Bethany Deyermond said she does not object to the size, but thinks the design does not belong in the village.

Ms. Berridge said the house does not need to actually be smaller, it just needs to look smaller.

He also said he felt good about the board’s suggestions to have the garage recede from the front facade.

“I’ll go back to the drawing board, I’ll work on the garage, and kind of strip this down a bit,” he said.

After some more discussion, Mr. Gomolka concluded: “This is a wonderful project. I think we all feel that way, and I think we’re really, really on the right track.”