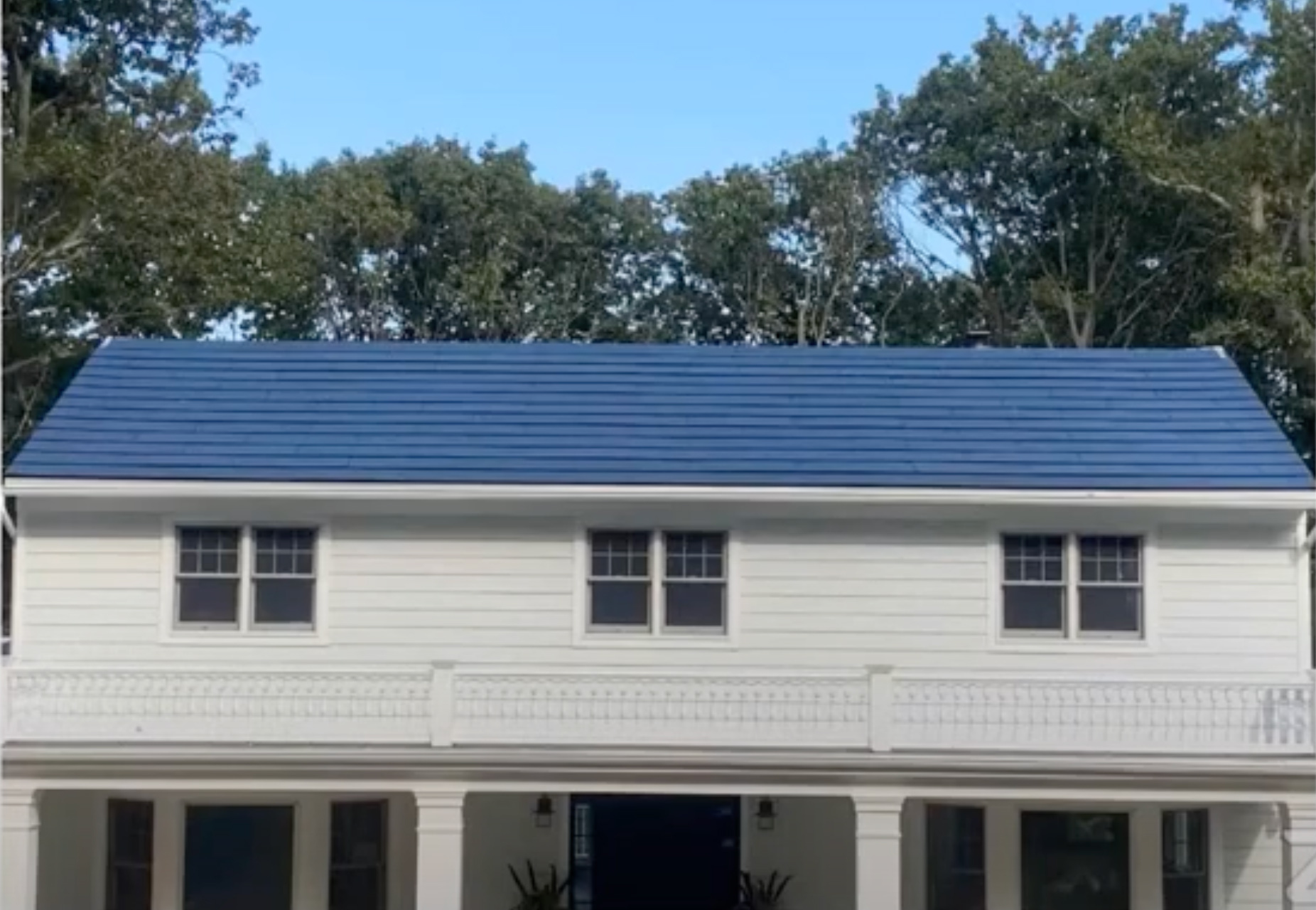 An example of a Tesla Solar Roof, presented to the Sag Harbor Village Zoning Board of Appeals.

After previously leaning toward approval of a Tesla Solar Roof in the village’s historic district, the Sag Harbor Village Zoning Board of Appeals reversed course at its latest meeting when the members realized that the solar tiles would be larger than they originally thought.

Mary Ann Eddy, the chair of the village’s Harbor Committee, is seeking to replace the roof on her Hampton Street home with the solar energy-capturing tiles, but the village code prohibits rooftop solar systems in the historic district if they are visible from the street or neighboring properties.

The ZBA had appeared poised to approve the solar system anyway, because the solar tiles resemble a conventional roof. However, the board members learned at their March 16 meeting that the newest Tesla solar tiles are bigger than the older tiles they had in mind.

“We have something very specific in our code that disallows any rooftop solar collector,” ZBA Chairman Tim McGuire said during the meeting, explaining that some board members interpreted the code to be referencing only traditional solar panels and not solar shingles. “But it’s key to a lot of us, and including our Architectural Review Board, that they come as close to resembling traditional asphalt or wood shingles as they can.”

The board members had previously expressed concerns that the solar roof would create glare that affects the neighbors, as they said is the case with a roof that Tesla Energy installed in 2019 on Howard Street. Tesla representatives appeared before the board on March 16 to assuage those concerns, and it came to light that the Howard Street house has version two, or V2, Tesla tiles, and the proposed roof for Hampton Street would have V3 tiles.

Tesla inspections coordinator Alex Kaplan told the board the V3 tiles have minor coating improvements, which means less glare than V2 tiles. An analysis showed that, at peak sunlight hours, the neighboring homes on Hampton Street would not be tall enough to be affected by any glare.

The V3 tiles are also larger — so much so that board members concluded that the new roof would not adequately resemble a conventional roof.

He said he had been ready to move forward with approval, but with this new information he is not comfortable doing so without a change to the village code.

The V3 tiles are 45 inches horizontally, and 15 inches vertically. The V2 tiles, which are no longer on the market, were 14-inch-by-8-inch tabs.

“They’re about almost double in size, but once they’re installed, you can’t tell the difference,” Tesla’s Anais Fernandez said.

But the board did not agree that would be the case.

“The thrust of this for me is this is a historic contributing house that should really have a wood shingle roof on it,” ZBA member Scott Baker said. If a Tesla Solar Roof does not closely resemble the scale of a wood shingle roof, it will look out of character for both the house and the community, he explained. “We’re anticipating that once this is approved that other residents will want to do the same thing to their houses, so we don’t want to end up with an odd-looking historic zone.”

Mr. Baker also noted that the federal guidelines for historic preservation call for keeping the existing roof, and he said this plan is a great departure from the roof that would be on a historic house.

“We do have to follow the National Register regulations,” board member Susan Mead added, “and we would need to get the state historic preservation office involved in this because we don’t want to lose our designation.”

Mr. McGuire reiterated that, being that this is a big departure from a traditional roof, the Village Board would have to change the code before a Tesla Solar Roof could be permitted in the historic district. “I don’t think the zoning board is empowered to grant a variance that will then become the standard for the rest of the community without the code being changed,” he said. “... I’m in favor of this, but I’m not in favor of getting too far away from the size of a traditional roof without the code being changed.”