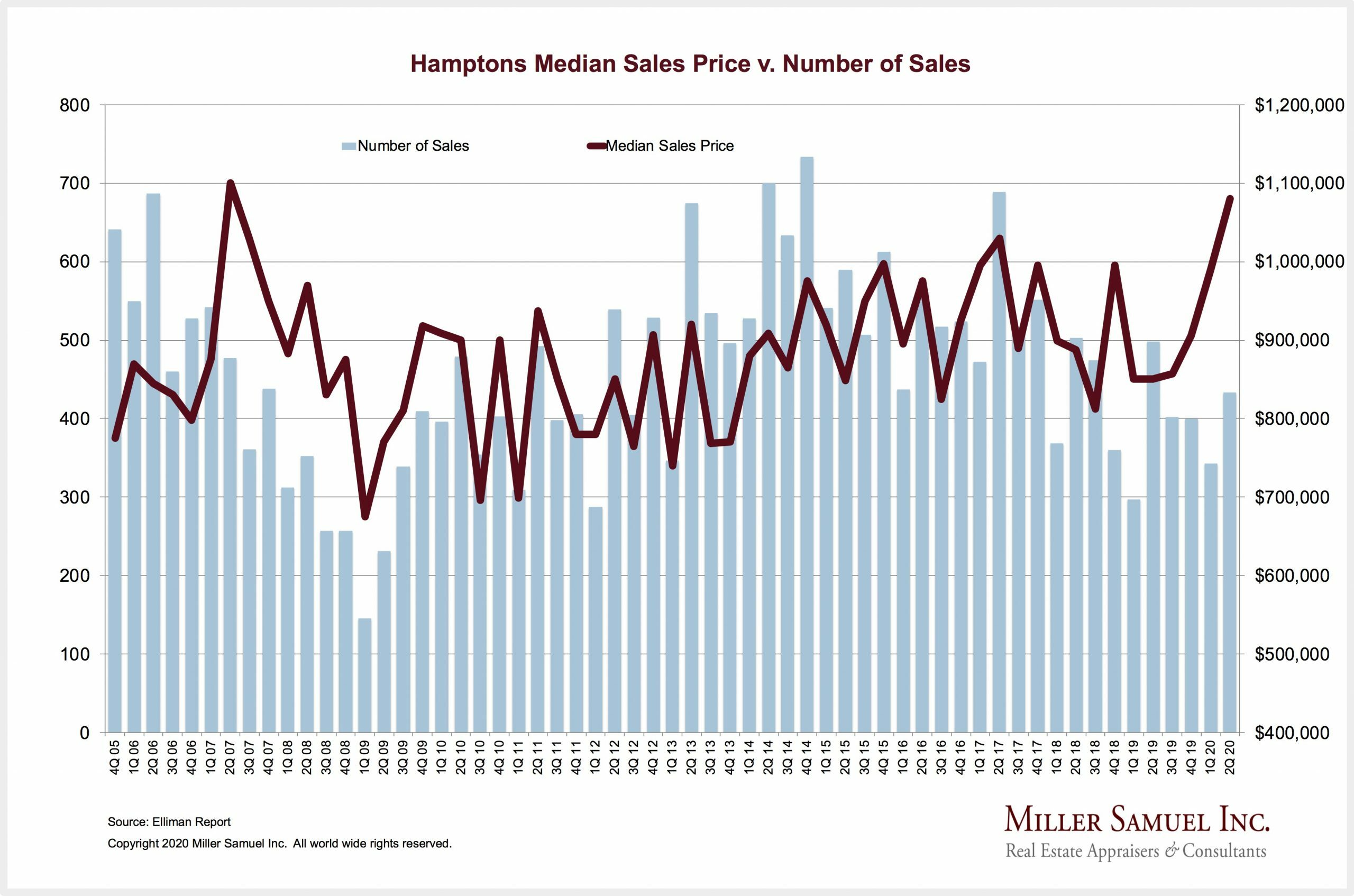 Amid the height of the coronavirus pandemic in New York and the state mandates that prohibited in-person real estate showings, Hamptons home sales dipped by 13 percent in the second quarter of 2020, while the median sales price shot up 27 percent and inventory sank by more than 26 percent.

Even though there were fewer sales in the second quarter of this year compared to the second quarter of 2019, the Hamptons market defied gravity, considering the pandemic. The area, like many other second-home markets outside New York City, has fared better than primary-home markets during the crisis. Flight from the city to communities with less density has buoyed second-home sales during a difficult time, and a surge in contract signings in June showed heightened interest in the Hamptons.

The data published in the Elliman Report on Thursday, July 23, also included that the average sales price rose 21 percent on the South Fork. Meanwhile, in the Long Island market — Nassau and Suffolk counties, excluding the Twin Forks — sales were down 39 percent and the average price rose just 5.5 percent.

Interest in Hamptons condominiums diminished greatly as buyers favored single-family homes with private yards and pools rather than townhouses with common spaces and shared amenities. The number of condo sales fell 67 percent compared to the same quarter a year earlier. The average price was down 42 percent, to $571,979, and the median price was down 14 percent, to $558,750.

Meanwhile, Hamptons single-family home sales fell by just 9 percent, the median price rose 25 percent to $1.06 million and the average price was up 20 percent to $2.19 million.

Todd Bourgard, Douglas Elliman’s senior executive manager of sales for the Hamptons, said that after the second week of the statewide stay-at-home order that began in late March, rentals really began to pick up.

“So that kept us very, very busy,” he said. “And then, of course, as the rental inventory began to slim out, the sales began to really come to fruition. So we went from rentals to sales pretty seamlessly.”

Many buyers of late expect their Hamptons home to be their primary home for right now, he reported.

The number of contract signings in June was “incredible,” he said, adding that it will be proven out in the third-quarter sales report after those deals close.

But the surge in home contracts in June didn’t stop there.

“It’s continued, and then some,” he said. “We are probably even more busy in July than we were in June.”

The activity is not typical of the month.

“Usually people are pretty settled in by July,” Mr. Bourgard observed. “They’re out here, they’re vacationing, they’re enjoying. This year, it’s a different feel. Now people are coming out here to make a purchase. A lot of these people, for now, are going to make this their primary home.”

The $1 million to $2 million market has been hot, with 78 out of 213 single-home contracts in June falling in that range. Mr. Bourgard said multiple offers were put in for many of those homes, often getting the sellers their asking price or even more than their asking price.

Buyers did not require the homes to be turnkey.

“If they need some work, the people aren’t overly hesitant as long as they can see they are going to get the yard space they want,” he said of buyers at that price range. “Of course, these days everybody wants to make sure they have a home office — very important.”

It wasn’t until June 10 that in-person home showings with both agent and buyer present were allowed to continue on Long Island.

It’s still the case that people visiting homes wear masks, gloves and booties, Mr. Bourgard noted, adding, “After going through this, everybody’s going to be very, very careful for a long time to come.”

The Sotheby’s International Realty 2021 Luxury Outlook — a publication exploring the priorities of high-net-worth individuals and the forces affecting their buying behavior — found that the appeal of space, safety and the outdoors, coupled with low interest rates, continues to drive homebuying in prime housing markets such as the Hamptons. The expectation is that suburbs and second-home markets will remain hot in 2021, if not longer, amid the coronavirus pandemic. “From the Slopes to the Shores, Wealth Will Settle Into Seasonal Towns and Secondary Cities for the Long Term,” one headline in the report reads. The report also details ... by Brendan J. O'Reilly