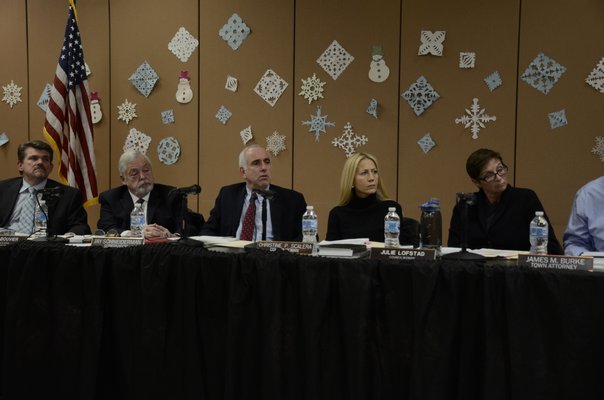 New rules aimed at creating more affordable housing in the Town of Southampton—primarily east of the Shinnecock Canal—in the form of accessory apartments were approved by Town Board members on Tuesday.

The revised rules allow owners of lots as small as a half acre in size to have and rent out an accessory apartment, instead of the minimum three-quarters of an acre lot under the current law.

If a homeowner wants to create an accessory apartment on the smaller-sized lots, which would increase density, Southampton Town Supervisor Jay Schneiderman said he was hoping to formulate a plan for that as well.

While the new rules may have loosened the regulations, they also allow the town to dictate how much rent homeowners can charge so the apartments remain affordable for those who work in the town.

According to the legislation, applications to obtain rental permits for accessory apartments must contain proof that the tenant meets income limitations for low- to moderate-income or middle income, set by the town code.

The rules also stipulate that the owners are also required to provide proof that the rent does not exceed the annual fair market rent, or FMR, for Suffolk County, which is set by the Department of Housing and Urban Development.

The less restrictive rules, Mr. Schneiderman explained, will affect only areas with a population of less than 500 people per square mile—so people who live in areas like Hampton Bays, East Quogue and Riverside would not be able to take advantage of the new rules.

“More expensive areas would qualify,” he said. “That’s where we really need it.”

Mr. Schneiderman and the other Town Board members pushed for changes to the accessory apartment rules because they could offer places for the everyday worker to live in the community in which they work—these could be people who work at the hospital or Town Hall, or serve in a fire department or an ambulance corps, for example.

Mr. Schneiderman has said people are being priced out of the area and commute from communities to the west, increasing the amount of traffic that filters into the area on either County Road 39 or Montauk Highway.

Providing more opportunities for affordable housing in the more expensive areas of the town—east of the Shinnecock Canal—could contribute to lessening traffic concerns, he explained.

Mr. Schneiderman said a single parent with two kids could benefit from the new law if, for example, they have a four-bedroom home and want to set up an apartment to rent using two of the bedrooms. The additional $1,907 the owner brings in from the rental could help with expenses and allow him or her to stay in the community.

He added that utilities can be charged on top of the regulated rent, so the homeowner is not stuck with the burden of additional costs.

If a person obtains an accessory apartment permit from the Building Department, an inspection of the property will take place to ensure it is properly set up to function as an apartment. If at any point the homeowner stops offering the apartment at an affordable rate or begins offering it as a summer rental, Mr. Schneiderman said they would be required to forfeit the right to rent out the apartment.

Town Board members voted unanimously to approve the new rules.

“I fully support this bill,” Town Board member Tommy John Schiavoni said on Tuesday. “It’s a way for young people to stay in the area.”

Town Board member Christine Scalera said she had concerns when the board started looking into allowing the additional density on smaller lots, and still has some questions about enforcing the rules.

Mr. Schneiderman said he and the board wrestled to come up with a solution for the past three years, and that he was happy with the outcome.

“I don’t think this will solve all of our affordable housing,” he said. “I think it’s a drop in the bucket.”

Mr. Schneiderman noted that if the town can get 10 additional units per year for people in the workforce to live in the town, ultimately, after 10 years, there will be 100 new units.