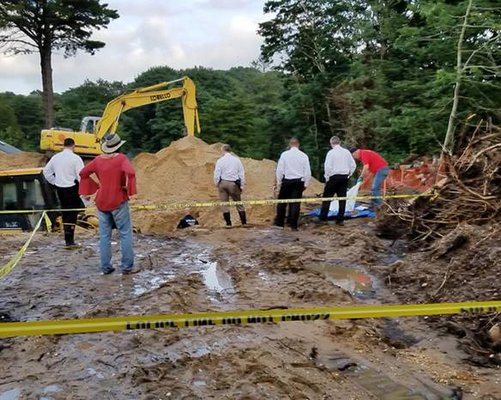 The Shinnecock Indian Nation Tribal Council met with Southampton Town Community Preservation Fund Manager Mary Wilson on Friday to discuss the possibility of the town purchasing the Hawthorne Road property in Shinnecock Hills where human skeletal remains were found at a construction site on Monday, August 13.

Town Supervisor Jay Schneiderman said Friday morning that while the Suffolk County medical examiner’s office cannot determine the ancestry of the remains, Mr. Schneiderman believes the bones to be of Shinnecock descent—and that the Town Board should take the appropriate steps in expediting the purchase and preservation of the property with CPF revenues.

“I don’t think this is a random death in the woods,” Mr. Schneiderman said.

It was unclear on Friday what the market value of the parcel is, which would determine the purchase price the town could pay. The appraisal process could take up to three weeks.

Mr. Schneiderman said the property owner—the owner is currently listed as KB Southampton LLC of Water Mill—was at the meeting and was willing to sell the land to the town. He did not further identify the property owner.

Tribal Trustee Lance Gumbs said after the meeting that he was pleased with the direction the town was heading—and fast. “I am hopeful of good negotiations going forward,” he said.

Mr. Schneiderman said that the Town Board members voiced concerned about the purchase setting a precedent for buying land where human remains were found, without conducting a proper archaeological review for future sites. The last time remains were found was at a former hotel in Bridgehampton; the town bought the property for about $5 million.

“I am willing to bet that, in this case, it’s worth purchasing the property without any review,” he noted. “Shinnecock Hills is a highly sensitive area—this time it’s the right thing to do.”

There are no laws on the books in Southampton Town—or East Hampton Town, for that matter—on how the town should monitor archaeological discoveries of this kind. It is general practice that when human remains are found, police are called, and the county medical examiner assesses the finding. In this case, “ancestry cannot be determined based on the age of the remains,” a spokesperson for the medical examiner said Tuesday. It would be up to the town to conduct its own archaeological review.

“There needs to be protocol in place to deal with this,” Mr. Schneiderman said. “Not every developer will be as responsible as this one in reporting it to the police. But if we make the process too impossible, we’re going to encourage people to act like they didn’t see anything, and more discoveries are going to get covered up.”

Members of the Shinnecock Nation Tribal Council have been asking the town to adopt new laws to protect against the desecration of ancient burial sites for more than a decade, Mr. Gumbs said. He noted that before the CPF meeting, he has felt “largely ignored” on this issue.

“This is exactly what we have been talking about for years, but finally someone is listening,” he said.