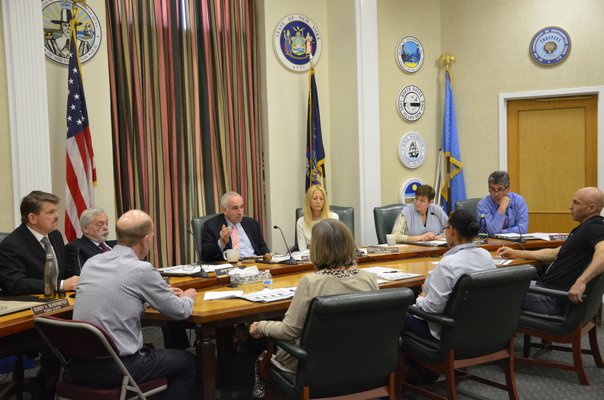 The overall tax assessment in Southampton Town is up sharply in 2019, by 10 percent, about double the pace of the last two years, reflecting a continuing rise in the value of properties throughout the town.

As tax assessment notices are being prepared to be sent out to nearly 30,000 homeowners this week, town officials are reminding residents that a 10 percent increase in the value of all of the town’s properties does not necessarily mean that an individual’s property tax bill will go up accordingly.

With officials anticipating some confusion, the letters are being sent nearly two weeks earlier than usual, giving property owners more time than in past years to decide if they want to file grievances challenging their individual tax assessments.

“People automatically think if they get a letter that their property value went up, that means their taxes are going up,” Town Supervisor Jay Schneiderman said at a Town Board work session on April 11. “That isn’t necessarily true. It really depends on the tax rate. If the tax rate goes down enough to offset the increase in property value, you won’t see an increase in taxes. You might even see a decrease in taxes.

“Over the last two years, we have, every year, lowered the tax rate. At the same time, we have seen the property values across the town increase,” he added.

Every four years the town conducts a full reassessment of the 52 neighborhoods in the town to ensure that every property is assessed based on its true market value.

During the years when a full valuation is not conducted, Sole Assessor Lisa Goree said, the assessments are based on market trends. If an area sees a 10 percent upward trend in sales, the home assessments in that neighborhood will increase by 10 percent as well.

Ms. Goree said on Tuesday that the overall taxable value of property in the town is going up 10 percent this year, compared to about 5 percent in both 2017 and 2018.

She noted that the amount of money levied through taxes cannot go up more than 2 percent under the state’s property tax levy cap, so the tax rate will be adjusted to meet the cap’s restrictions.

As far as individual property taxes, she noted, taxes on a third of the properties are expected to go up, a third will go down, and the final third will stay the same.

“It kind of keeps everyone uniform,” Ms. Goree said. “That’s one of the reasons for doing a reassessment. Everyone is uniform, everyone is paying their fair share. It just creates uniformity.”

Ultimately, though, the assessments were based on an increasing number of sales taking place that were higher than the previously assessed value.

“It’s not like we said, ‘Let’s give all the waterfront properties this percentage of increase and only increase the other properties by this,’” she said. “It still has to be supported by sales.”

Ms. Goree met with Town Board members during a work session on April 11 and compared residential assessments of single-family homes in Flanders and Water Mill. Out of 64 homes that sold in Flanders, the ratio of sales value compared to the assessed value was nearly 84 percent, meaning the homes were assessed lower than what they actually were selling for.

The reason homes were assessed lower, Ms. Goree said, was because Flanders has seen its share of issues—the market decreased in 2012, and then Superstorm Sandy devastated the area later that year.

“Now, they’re bouncing back,” Ms. Goree said, suggesting the increase in sales is a good thing.

Mr. Schneiderman asked, if a person purchased a $50 million to $60 million home on the waterfront, whether that would impact the rest of the town, and Ms. Goree said one sale does not drive the market. But when multiple homes in a neighborhood sell for a much higher value than that of the rest of the homes in the neighborhood, a trend forms and the assessments go up for everyone else.

In Flanders, Ms. Goree said, some assessments may increase by between $10,000 and $30,000, depending on where a person lives. In 2018, the tax rate in the town was $1.389 per $1,000 of assessed valuation. If they live close to the water, the assessment will be on the higher end, because their homes may carry a higher value.

“Because we were able to put that amount of added value on the rolls this year, it gives an opportunity for the school districts and the other municipalities to decrease the tax rate so that the residents aren’t hit with increasing taxes,” Ms. Goree said.

Grievance day is Tuesday, May 21, so taxpayers are being given nearly a month to meet with Ms. Goree and her staff, or file a grievance, whether in person or online. “They can give my office a call, and we’ll be happy to go over it with them,” she said.