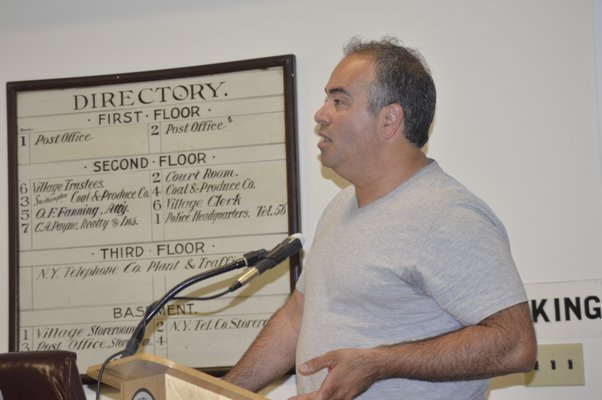 A Southampton builder has filed suit against both Southampton Village and its Board of Historic Preservation and Architectural Review to appeal the board's denial of his application to build a house on Wooley Street.

Michael White, president and founder of Georgica Builders, filed the lawsuit two weeks ago in Suffolk County Supreme Court. The suit alleges that the ARB's decision to deny his plans to construct a 2,979-square-foot, two-story, single-family home at 81 Wooley Street was “arbitrary, capricious, illegal and contrary to established law. It asks the court to deem the application complete and require the ARB to approve the plan for the house as is, without any additional hearings.

In its denial, dated August 24, the ARB had said the application was incomplete, but Mr. White insisted he had done everything the board asked, submitting all the necessary documents and making all adjustments the board requested.

However, the ARB's decision stated that the documents Mr. White submitted were either not delivered in time, or did not comply with standards. The board also said he did not submit an alternate plan for the front-yard setback, with members saying the proposed house was set too far forward, and that he did not submit an alternate rendering of the front facade showing adjustments he had been asked to make.

“The ARB refuses to following the zoning code," Mr. White said last week. "The ARB is an aesthetics board. They're not there to tell people where the setback line should be.”

Beau Robinson, the attorney for the ARB, declined to comment, saying he does not discuss pending litigation.

Mr. White's frustration with the ARB became apparent in July when he painted his present house on Wooley Street red, white and blue, in the style of an American flag, after the ARB and other Wooley Street residents had criticized aspects of the house he proposed to replace it with. He already had received approval to tear the current house down, but needed the green light from the ARB for the new one.

Most of the criticism had to do with the proposed setback for the house, 26.3 feet from the sidewalk. Residents argued that it was too close and the ARB echoed that concern in its decision to deny the project.

“That’s not up to them, that’s up to the Building Department to determine the zoning code," Mr. White said. “I hope the judge says I can put my house at 25 feet, like the other houses on Wooley Street.”

Mr. White had put 81 Wooley Street up for sale for $1.9 million, but after filing the suit said that if the judge rules in his favor, he will take it off the market so he can proceed with his original plan.

“Nobody’s going to buy the house with a lawsuit hanging over it anyway,” he said.