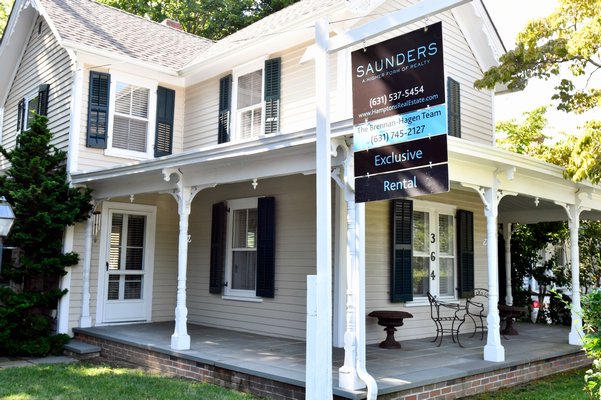 A major reform to New York State housing law, has had an unintended consequence on the Hamptons summer rental market.

A major reform to New York State housing law, enacted by the State Legislature in June and signed by the governor, has had an unintended consequence on the Hamptons summer rental market — and a fix in time for the summer of 2020 still could be months away.

The Housing Stability and Tenant Protection Act of 2019 comprises several measures pertaining to rent control in New York City, specifically, but some provisions of the bill have statewide implications.

The measure that has tripped up the summer rental market in this region pertains to security deposits and advance rent. The law now prohibits landlords from requiring advance payment or a deposit in excess of the equivalent of one month’s rent. So landlords no longer have the option of demanding first month’s rent and last month’s rent, plus a security deposit, before a tenant can move in.

But in the luxury summer rental market, it had been customary for renters to pay for the entire season upfront, in addition to putting down a sizable security deposit.

The law was never intended to apply to seasonal rentals, according to State Assemblyman Fred W. Thiele Jr., who is planning to introduce a bill in the next legislative session that will make that clear.

Mr. Thiele said the provision was part of a 75-page housing bill that encompassed nine or 10 bills, including one he had been working on for a decade pertaining to mobile home park residents. He was present for all debate and discussion, he said, and seasonal rentals were never discussed.

“This was all focused on people’s primary residences, where they live full time,” he recalled. “It wasn’t intended to apply to seasonal rentals, temporary rentals, things of that nature. But people have pointed out that it doesn’t expressly say that, even though that was the intent.”

He said he spoke to the sponsors of the provision and their staff, and they all agreed that seasonal rentals were not supposed to be subject to the limit on security deposits and advance payment. He also spoke with the attorney general’s office, but the attorney general has yet to render guidance, he added.

“Even if they do, it makes sense, I think, to put language in the law that makes it clear that this doesn’t apply to summer rentals, so that you don’t end up with litigation or controversy in the next rental season,” Mr. Thiele said.

Attorney General Letitia James’s office did not respond to an inquiry last week on when it might release guidance.

Richard Stauffer, the executive officer of the Hamptons and North Fork Realtors Association, or HANFRA, said the bill was rushed through at the end of the legislative session in just a few days.

“The bill was poorly constructed, poorly conceived and rammed through,” he said, later adding, “It’s like the Mueller Report: Most of the people in the legislature did not read the law. They wanted to get home.”

He called the bill a disaster, and not just because of how it “deleteriously and chaotically” affects seasonal rentals.

“During the debate, there was never a discussion of a seasonal rental market. There was never discussion of the implications this will have on the college student trying to find temporary housing for a term or two terms while attending school,” Mr. Stauffer said. “The primary focus of the debate dealt with the issues in New York City. It’s lopsided. It provides tenant rights above and beyond those of the homeowner or rental person. It has to be clarified.”

The attorney general can issue a clarification and resolve some of the issues, but damage has already been done, according to Mr. Stauffer: “It’s already caused a tremendous amount of confusion.”

He agreed that limiting landlords to requiring no more than one month’s rent as an advance or deposit is a reasonable approach for a yearlong tenancy — but not for seasonal.

“The way the seasonal rentals are done, the entire rental amount is collected upfront, a security deposit is collected, and there hasn’t been issues,” Mr. Stauffer said. “This is creating issues.”

Because the bill became law in the middle of June, many leases for 2019 Hamptons summer rentals were already inked before they could be affected. But after this summer ends in a few weeks, 2020 rental bookings will begin in earnest.

Enzo Morabito, an associate real estate broker with Douglas Elliman, said his 2019 rentals were all brokered under the old way of doing things. “The rental season was over pretty much for us, so we didn’t have to deal with it,” he said.

Homeowners are used to having their money upfront, he noted. And though his own clients have not been affected, he did hear about a situation in which a woman had paid for June, but when it came time to pay again, as she had agreed, she objected and said, “I’m only paying for what I’m going to use.”

“It hasn’t affected me yet,” Mr. Morabito said. “I’ll find out about it, I’m sure, this coming season.”

Douglas Elliman’s legal department is planning sit-downs with brokers to review the new law, he noted.

The advice HANFRA has given Realtors is to have the homeowner contact an attorney, write up a lease and follow the law as currently written, Mr. Stauffer said, adding, “We’re telling people, don’t collect any advance money.”

Mr. Thiele said his colleagues in other areas of the state, such as the Catskills and the Adirondacks, have the same issue with the housing reform. But no area will see a bigger impact than the South Fork, where two-thirds of the homes east of the Shinnecock Canal are seasonal.

Mr. Thiele said he expects his bill to clarify the new housing law will be taken up early in the next legislative session, which begins in January, and will not be opposed. “We want to do it early in the session, because we want the rules to be clear going into the 2020 rental season,” he said.

He added that he also expects that other clarifications will be necessary. “I suspect that because this was such a major reform and it was a big bill, this may not be the only glitch in this bill. I think it’s possible there may be a few other things.”