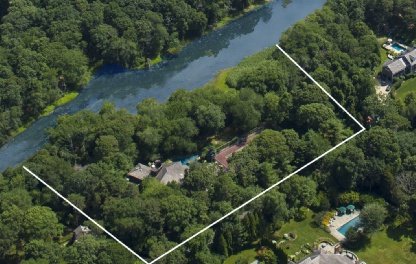 A theater ticket doesn’t cost $13.5 million (yet), even to “Hamilton,” but that is what it will take to buy the mansion just put on the market by theater mogul Robert Nederlander. The 5,000-square-foot house, built in 1985, sits on 2 acres in the Georgica Pond section of East Hampton.

Mr. Nederlander, who will celebrate his 84th birthday in three weeks, originally hails from Detroit. His father, David, had purchased his first theater in 1905 in that city, which became the foundation of the Nederlander Organization. Robert Nederlander attended the University of Michigan then went on to earn a law degree from that university (go Wolverines!) and established a law practice in Detroit.

When his father died in the 1960s, Robert, while remaining in Michigan, joined three of his four brothers in buying more theaters to expand the organization to the point of rivaling the powerful Shubert Theater company in New York. His connection to the Big Apple was strengthened in 1973 when the Nederlander brothers became limited partners with George Steinbrenner in the acquisition of the New York Yankees. Robert finally moved to New York in 1981 to serve as president of the Nederlander Organization. While that company continued to grow, he became further immersed in baseball affairs, especially in 1990, when Mr. Steinbrenner was suspended by Commissioner Fay Vincent because of the Dave Winfield scandal and Mr. Nederlander became the ball club’s managing general partner. He stepped down from that role the following year, to be succeeded by Joe Malloy.

By the way, for those keeping track of such things, in addition to the Georgica Pond property, Mr. Nederlander’s connection to East Hampton includes one of his sons once being married to the cookbook author Nina Danielle Sklar, who later married Jerry Seinfeld, who sports a baseball diamond in the backyard of his Further Lane home.

Mr. Nederlander’s manse is represented by Douglas Elliman. Among the features are 7 bedrooms, a tennis court, a third-level observation deck and tons of trees to preserve privacy.