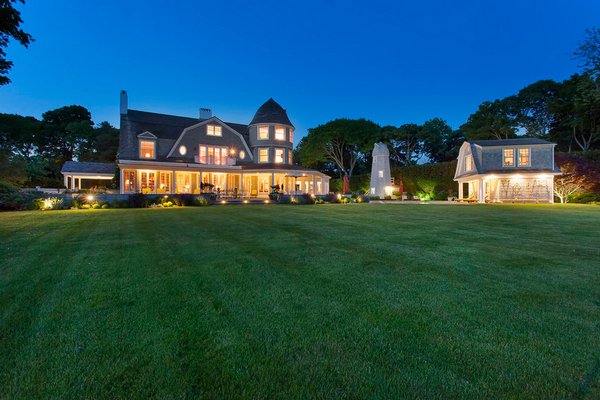 To find the biggest deal of the past week, one has to look to Remsenburg and at what is actually three deals in one. A purchaser hiding behind three separate limited liability corporations has purchased from the estate of Jack Fishman three parcels at 74, 78, and 80 Cedar Lane West for a total of $10,875,000.

The most prominent of the properties is the Seatuck Lodge, which has undergone years of restoration and sits on the shore of Moriches Bay. Situated on 7.35 acres, the building began as a hunting lodge in the 19th century. Today, the property features towering trees, vegetable gardens, and a “Zen path.” The former lodge, now a residence, has 9 bedrooms and 8 baths, a library, study, playroom, and a sunroom. There is also a 4-bedroom, 3-bath guest house with a full kitchen. Outdoors is a heated saltwater pool, with a pool house, sauna, fitness room, and two bathrooms. There are also a boat house and a tennis court, and even an operating windmill and a chicken coop. The recently completed renovation project was undertaken by the architectural firm Austin Patterson Disston.

The lodge was built in 1890, but began to gain a reputation among hunters and vacationers in the 1910s when it was used by members of President William Howard Taft’s administration. One of them, Charles Hilles, assistant secretary of the treasury, purchased the property in 1918—six years after Woodrow Wilson had been elected to replace Mr. Taft, who had been named Chief Justice of the U.S. Supreme Court—and Seatuck became a family summer home. Mr. Hilles died in 1949, and his family sold the property the following year.

The original builder and owner of Seatuck Lodge was Alonzo Reed. No immediate name recognition? Forget those guilt feelings. He and Brainerd Kellogg were in the forefront of the effort to diagram sentences for better instruction of grammar and writing in schools. Their pioneering books were “Guided Lessons in English” and “Higher Lessons in English,” published in 1875 and 1877. Apparently, they were such hits that Mr. Reed was able to underwrite the construction of Seatuck Lodge almost two decades later.

A pretty decent deal was reported east of the Shinnecock Canal. For a little more than $8 million, another LLC, Permit Realty Holdings, picked up 36 Briar Path Road in the Village of East Hampton. This is in the Georgica estate area, and the house has 8 bedrooms, 8.5 baths, seven fireplaces, a library, and in case the new owner has a very active lifestyle, there are three laundry rooms.

And let’s give a shout-out to Water Mill, which gives a good effort every week to make the “big deal” list. Both going to LLCs were 24 Holly Lane for $7.7 million and 925 Flying Point Road for $5.9 million. Better luck next week!