Two For One On North Haven's Robertson Drive - 27 East

Two For One On North Haven’s Robertson Drive 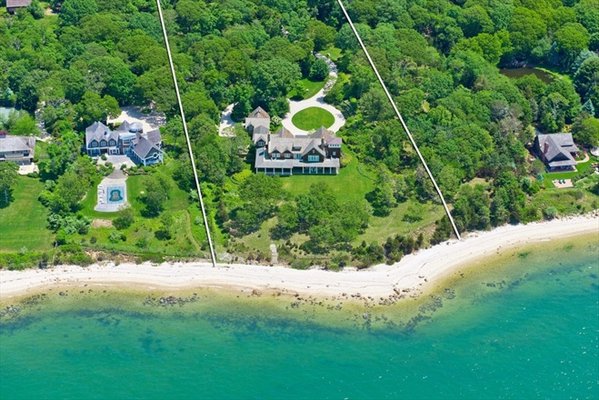 Anyone using asbestos on North Haven had better watch out—Perry Weitz is moving into the neighborhood. The co-founder of the Manhattan law firm Weitz & Luxenberg, which has raked in billions in asbestos-related litigation, recently closed on two adjacent properties in the village, paying a total of $26.5 million for them.

The larger of the two waterfront parcels on Robertson Drive, at 5.5 acres, has an 11,000-square-foot residence containing five bedrooms and 7.5 baths. It was built in 2008 “to resemble an old-world estate,” we’re told, and it faces west to take full advantage of sunsets over Noyac Bay. The house has a gourmet open kitchen, double living rooms, formal dining room, paneled library, a gallery to display art, three fieldstone fireplaces, a wine cellar, and stone-covered porches. Outside are a pool and 3,000 square feet of covered porches with an outdoor fireplace. The second parcel is 4.14 acres of vacant land right next door, for a total just shy of 10 acres of prime real estate.

Perry Weitz was born and raised in Brooklyn. According to the law firm’s website, he was “blessed by nurturing parents” who “instilled in him at a tender age the importance of resisting wrongdoers, of never standing idly by or looking the other way when the strong use their muscle or positions of privilege” to abuse those with less. He graduated from the Hofstra University School of Law in 1983 and two years later was admitted to practice law in New York State.

He co-founded Weitz & Luxenberg in 1986, and the firm’s first major case was suing on behalf of 36 workers who became sick after working at the Brooklyn Navy Yard, who wound up receiving $52.5 million of the $75 million judgment. The law firm went on to represent clients in hundreds of lawsuits involving asbestos and mesothelioma, resulting in judgments totaling over $8 billion. As a result, Mr. Weitz is a wealthy man. According to an article by Richard Johnson published last year in the New York Post, “Weitz regularly flies to his ranch outside Aspen, Colo., on his $30 million Challenger 605, which costs at least $40,000 per trip.” That ranch is reported to be 44 acres, and Mr. Weitz also owns two yachts to use when not on terra firma. Next spring, will one of them be pulling into the marina next to the Long Wharf in Sag Harbor?