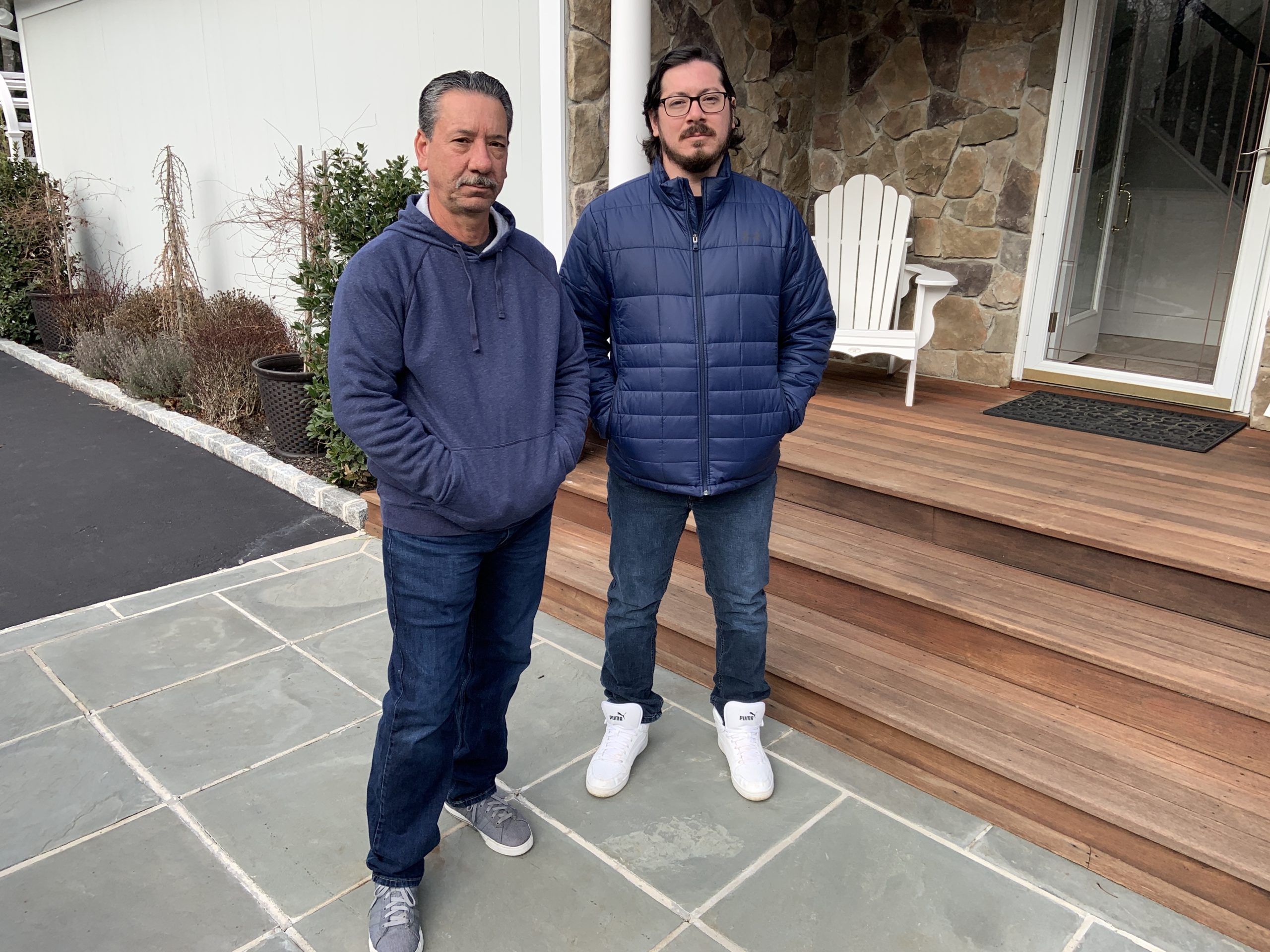 Louis DiPasquale, left, with his son, Louis DiPasquale III, who has been living with his parents in Quiogue after returning from military service in Cuba because a tenant refuses to leave a Sound Beach house that was intended for him.

For the past 10 months, veteran Louis DiPasquale III should have been living in a Sound Beach cottage that his father had bought to fix up and then sell to him at cost. Instead, he’s been staying at his parents’ house in Quiogue because a tenant who hasn’t paid rent for more than a year has overstayed her lease in Sound Beach and refuses to leave, citing New York State’s eviction moratorium.

The moratorium, which is set to expire on May 1, but may be extended once again, has made it impossible to evict the tenant, even though she stopped paying rent before Governor Andrew Cuomo announced the ban on evictions as the state’s pandemic shutdown began. The situation has left Mr. DiPasquale’s father, also named Louis DiPasquale, to go out of pocket for interest payments on the home and has stuck him with the bill for utilities that the tenant stopped paying. Twisting the knife even more, the tenant has ridiculed pandemic safety measures after filing a COVID hardship declaration that states moving “would pose a significant health risk,” according to the elder Mr. DiPasquale.

“We’re not landlords — and I’ll never be a landlord again,” the elder Mr. DiPasquale said on Friday, April 2. He explained that the house was never intended to be a rental property. Things just worked out that way.

He conveyed the events that led to him having a tenant: His son is a U.S. Army veteran who served on active duty in Afghanistan before becoming a reservist, and he had found a small cottage in Sound Beach that he wanted to buy. However, the cottage needed so much work that it was not eligible for a Department of Veterans Affairs loan.

The elder Mr. DiPasquale decided to take out a home equity line of credit to buy and fix up the cottage himself so it would meet the standards for a VA loan. But before the younger Mr. DiPasquale could move in and obtain a mortgage, he was called up for reserve duty in Cuba.

“I was just at the tail end of fixing it, and he got deployed,” the elder Mr. DiPasquale said.

With a newly renovated but vacant house on his hands, he decided to rent it out. He found the tenant on Facebook Marketplace and was clear that the lease was not renewable.

“She knew it was just going to be a one-year lease,” he said, adding that the tenant said she was fine with that because she wanted to buy a house anyway.

He followed the normal eviction process for a nonpaying tenant, serving the tenant with a rent demand, as required, in early March 2020, he said, and a court appearance date was set for April 1, 2020. But then the courts were shut down before the scheduled appearance.

“Now we go into the pandemic, everything starts shutting down, and I didn’t bother her at all,” he said. “I understood everything — I lost my mom May 2 in the nursing home — so everyone’s going through the same thing.”

But not only did she cease paying rent, she also kept living there once her lease was up at the end of May last year. That meant his son, who was back from Cuba, could not move into the home that was always intended to be his.

When courts reopened, Mr. DiPasquale tried to have her removed, but learned that he could not enforce an eviction from before the shutdown because he had not officially served the tenant before the moratorium was enacted, he said.

The judge asked both parties to strike a deal, and Mr. DiPasquale agreed to not seek payment for any back rent if she agreed to vacate by January 1, 2021. “She had four months to get out,” he said. “… She had to go back to court to sign the papers, and she wouldn’t sign, and that’s when I really got angry, and I was just like, ‘This is getting too much.’ And then, it’s one moratorium after the other.”

The younger Mr. DiPasquale said that when he came back from Cuba, he wanted to live closer to his kids and have some independence for himself. “I mean, I’m 35 years old and I’m living at home with mommy and daddy,” he said. “It’s not exactly ideal for me.”

He is living in an accessory apartment within his parents’ house, but it’s not the same as having his own home. Had things gone a bit differently, he would be in a very different situation after returning from his service.

“At that point, I would have taken out a mortgage because the house was fixed. … Now it’s beautiful, it’s brand new,” he said. “I’d be able to get a VA loan for it, and it would be under my name.”

In a COVID hardship declaration dated January 26, the tenant indicated that she has had a significant loss of household income during the pandemic and that moving expenses and difficulty securing alternative housing create a hardship. The declaration also includes a checked box indicating that moving would “pose a significant health risk.”

The elder Mr. DiPasquale scoffed at the idea that she won’t move because she fears COVID, and noted that fear has not stopped her from taking a ski trip to Pennsylvania — where she shared of video of herself making fun of skiers for wearing masks — and from recently traveling to North Carolina — where, in another video, she lauded that state’s more lax social distancing requirements.

“She’s making fun of people with masks, and she’s just thumbing her nose at the whole pandemic,” he said.

A federal stimulus bill included rent relief to be distributed by states so tenants could catch up on missed rent payments and landlords could afford the loans and taxes they owe on properties. However, Mr. DiPasquale, having an uncooperative tenant, may never see any of that money.

“I don’t look for a handout, but there’s all this money coming down the pipeline, and we have no access to it,” he said.

A court date was scheduled for Wednesday, April 7. Mr. DiPasquale said he looks forward to being heard by a judge, but he expects another adjournment.

Back in August, Mr. DiPasquale retained a lawyer, his neighbor John Lynch of the Westhampton Beach law firm Keneally, Lynch & Bak. Mr. Lynch said Friday that he hopes to get an eviction order on April 7, even though it can’t be executed by the county sheriff’s office until the moratorium is lifted May 1.

His firm is dealing with a number of similar cases on Long Island.

“We’re running into a lot of people who I believe can pay and are saying, ‘Well, if you can’t collect the rent and you cant kick me out, why should I pay?’” he said.

The Express News Group has chosen not to name the tenant due to the nature of the dispute. Called for comment, she said she would involve her lawyer if she is contacted again, and then hung up.

A new Amagansett modern south of Montauk Highway with a waterview roof deck and deeded ... 6 Apr 2021 by Staff Writer