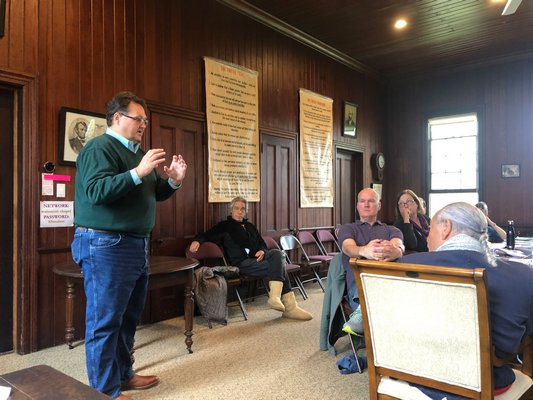 David Eagan, president of the Wainscott School Board, told the CAC that the school has had a major influx of students in the last year. MICHAEL WRIGHT 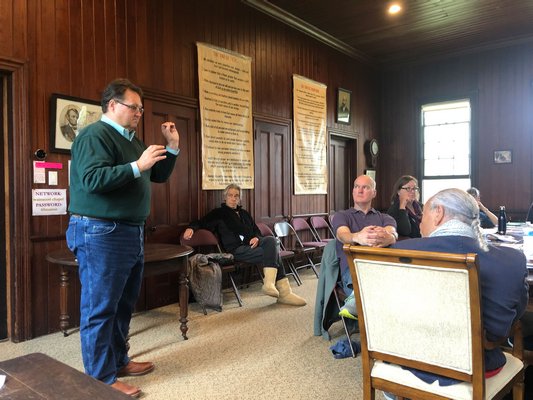 David Eagan, president of the Wainscott School Board, told the CAC that the school has had a major influx of students in the last year. MICHAEL WRIGHT

An influx of students from families living year-round in a former complex of vacation cottages has already pushed the small Wainscott School over capacity—and a planned affordable housing project could overwhelm it in coming years, according to the Wainscott School Board’s president.

David Eagan painted a dire picture of the future of the quaint schoolhouse for members of the Wainscott Citizens Advisory Committee over the weekend, saying that he fears the potential influx of students from a housing development that is still years down the road could push the district’s kindergarten-through-third grade student population beyond what the existing schoolhouse can handle.

With little room for expanding on the current schoolhouse property, Mr. Eagan warned, the school district could reach a point where its only feasible option would be to send all Wainscott students to larger neighboring districts, paying tuition.

“The option would be to close the school and become an administrative district—a bank account, basically,” he said, speaking in the meeting room of the Wainscott Chapel on Saturday. “Our taxes would still be low, of course, and if you had an expert look at it on a solely monetary basis, they’d tell you that’s the only option that makes sense.”

But, of course, the community would not look at it on a purely monetary basis, he said: The schoolhouse and the historic chapel in which the committee was meeting were the anchors of Wainscott’s history.

“These are the cultural institutions that define us—this is our windmill,” he said. “It would be a shame for town government to have such a disastrous impact on a school and community.”

Mr. Eagan said the district has taken “no position” on affordable housing in general and wishes to stay out of the political realm. But with town elections planned this fall, he urged members of the committee to consider the situation in Wainscott and “let your feelings be known.”

It is not the first time that the Wainscott School District has expressed dire warnings about the impacts of an affordable housing proposal. In 2014, the district and Wainscott residents derailed a pitch for a 49-unit housing complex on town-owned land on Stephen Hands Path, saying the projected number of students who would be sent to the Wainscott School from the complex would force a costly expansion of the school building.

Since that time, the Wainscott School has seen its enrollment climb steeply, a growth that Mr. Eagan chalked up to Wainscott’s existing supply of “affordable” housing in the form of houses available for year-round rentals—which have become increasingly rare townwide in the age of Airbnb—and of onetime vacation cottages that are now used as year-round housing.

Mr. Eagan pointed to the Cozy Cabins complex on Montauk Highway, which he said has seen an almost complete conversion to year-round housing in the year since the former Inn at East Hampton motel, which had been serving as year-round rental housing, was sold and renovated into luxury motel rooms. He said the surge in students at the Wainscott School this past school year came largely from the Cozy Cabins.

The school currently has 28 children, and there are already 32 enrolled for the 2019-20 school year, he said. The current schoolhouse, which was built in 2008, was designed to handle up to 24 kids.

Relative to the size of its year-round population, Wainscott has a grossly outsized number of students, according to Mr. Eagan. With only slightly more year-round residents than neighboring Sagaponack, Wainscott has 127 school-age children living in its boundaries—while Sagaponack has just 38, he said.

East Hampton Town purchased 4.2 acres of land from the Triune Baptist Church last year for $900,000 and immediately announced plans to use the land for an affordable housing complex.

The Sag Harbor Community Housing Trust owns 2 acres of land immediately adjacent to the Triune parcel, and the trust and the town say they plan to combine their holdings to maximize the number of units that can be built on the property.

The initiative is still in its infancy, and there have been no discussions of the number of units or design of the project. The East Hampton Housing Authority—an independent entity from town government—is preparing to build 37 rental units on 4.6 acres of land in Amagansett.

But East Hampton Town Councilman Jeff Bragman, speaking at the Wainscott meeting on Saturday, said he does not think the Route 114 property will be able to accommodate as many units as the Amagansett project, even when the similarly sized town-owned land is combined with 2 acres owned by the Sag Harbor trust. He said the development is in a critical water recharge zone, and that the odd shape of the properties—which are long but very narrow—likely would limit the number of units.

Mr. Bragman also said that he thought Mr. Eagan’s dire warnings about the impact of the affordable housing project on the school were unlikely to prove prescient.

“I thought Mr. Eagan presented a rather stark choice that I hope is not the reality—and I don’t think is an appropriate outlook,” said Mr. Bragman, who is the Town Board’s liaison to Wainscott. “They have every right to be concerned about the character of that school, but at the same time they have an obligation to accommodate affordable housing, like every hamlet does. There has to be a way to work these two strong needs together so that we accommodate both.”

Some members of the CAC seemed to see things similarly.

Michael Hansen, who currently has two children at the Wainscott School, noted that the school had only gone up to second grade at times in the past, not third, as it does now, and that paring back grades would be one way to reduce the number of students in the building without shuttering it completely.

He also noted that the number of students who attend the school tends to fluctuate significantly from year to year.

Mr. Eagan acknowledged the fluctuations but said the overall trend is “through the roof.”

The School Board president’s presentation at the committee’s monthly meeting had started out as an explanation of the 18-percent tax increase the school will be passing along to property owners this year. The leap, he explained, is due to the district having artificially lowered taxes for the last seven years as it spent down—under orders from the New York State comptroller’s office—an over-inflated surplus fund from years of conservative budgeting that ended up with reserves exceeding what the state allows.

With the fund reserves now below the state-mandated cap of 4 percent of the annual budget, the district has to fill in a gap in the current tax levy. He said there would likely be another substantial increase in the tax levy next year as well, but that Wainscott still boasts the lowest school taxes for its residents of any district in the town.

And much of that is due to its maintaining of its small schoolhouse and common school district. But the meaning of the school to Wainscott residents, he said, goes far beyond fiscal conservatism.

“This school represents who we are as a community,” Mr. Eagan said. “And I think it’s something we should fight like hell to keep.”