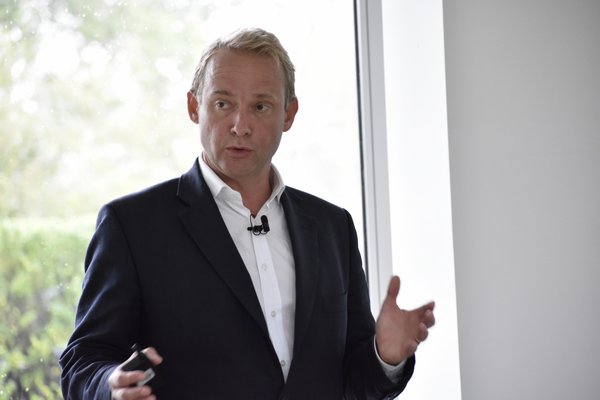 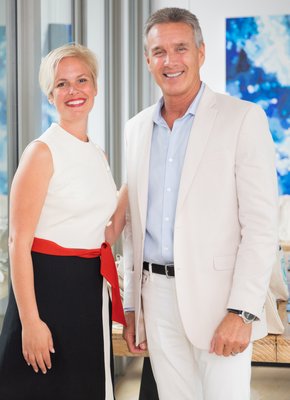 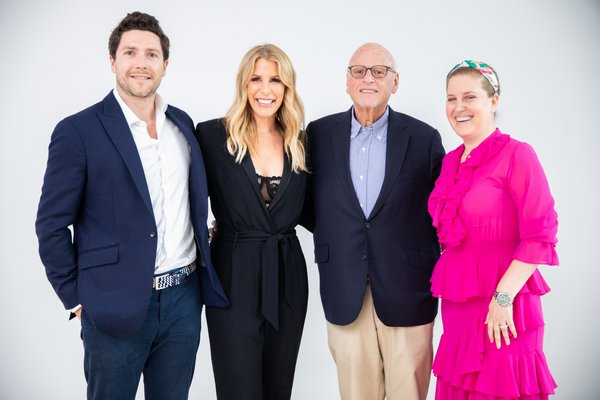 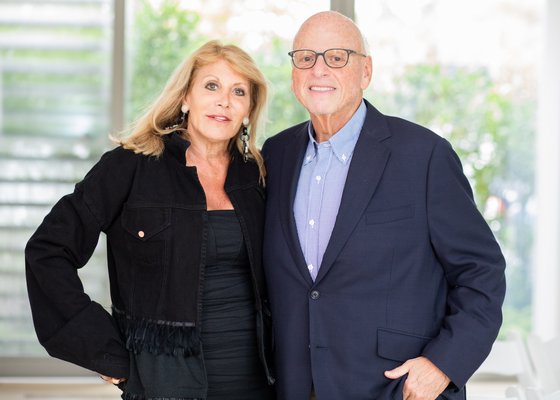 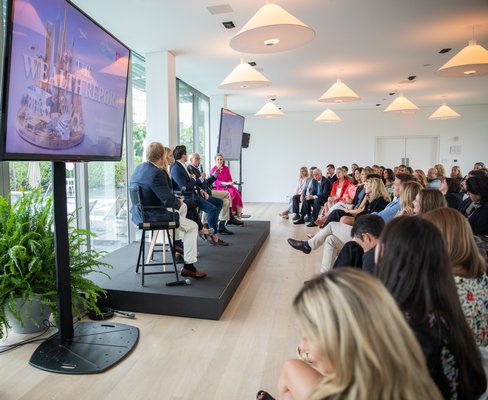 Liam Bailey, the global head of research at Knight Frank. 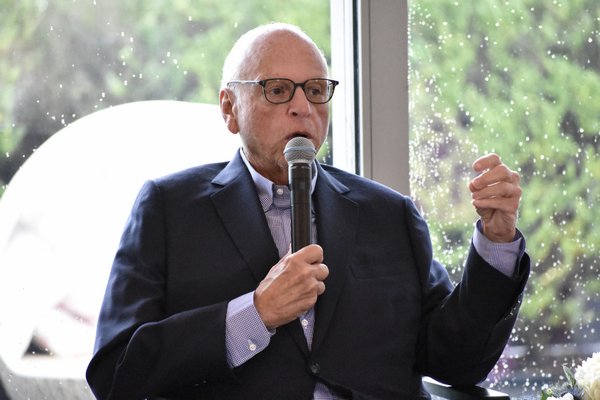 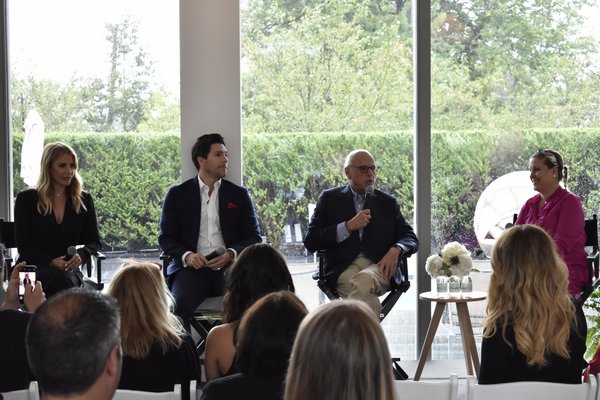 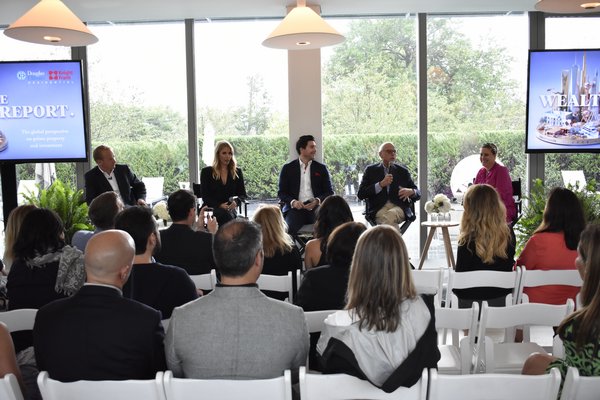 Divining the future of the luxury real estate market requires watching and analyzing factors well beyond the scope of homebuying — and that’s just what The Wealth Report does.

Douglas Elliman and Knight Frank presented the key findings of The Wealth Report and a panel discussion with U.S. and international luxury real estate professionals last Wednesday, August 28, at the Topping Rose House in Bridgehampton, the first time a live presentation of the annual report has been held in the Hamptons.

Liam Bailey, the global head of research for Knight Frank, a London-based global real estate firm, offered the biggest takeaways from the 2019 report, which debuted in March, and explained the emerging developments since then that analysts are watching.

“We’re always looking at understanding and seeking out trends in luxury residential markets, but also luxury assets, and also the wider political and economic underpinnings of our luxury markets that we all work within,” Mr. Bailey told the room of mostly brokers and agents.

One of those asset markets he’s watching — in addition to fine wine and luxury cars — is art. The Wealth Report noted in March that the 2018 sale of “Portrait of an Artist” by David Hockney for $90.3 million made it the most expensive work by a living artist ever. However, since the report was published, Mr. Bailey said, that record was broken when “Rabbit” by Jeff Koons sold for $91.1 million.

It’s anecdotes like these that belie the reported slowing economic growth worldwide.

Mr. Bailey said most economists recognize there is a synchronized global economic slowdown. He cited a number of signs and contributing factors, such as the U.S.-China trade war, a slowdown in manufacturing in European economies, tensions in Hong Kong, and the pending Brexit in Britain.

“All taken together, there is an expectation there will be a slowdown in the global economy in the next 12 months,” he said.

Average annual growth over a 10-year period was about 2.3 percent, he said, while the United States and other parts of the world have seen record employment levels and record job creation.

“We’re excited, because the market has picked up and the high-end sales have been better than we have seen in a couple of years,” Ms. Grossman said of the Hamptons. She noted that a handful of deals — some in contract, some closed — have happened recently between $30 million and $39 million.

Mr. Lorber said a problem in the Hamptons luxury market has been huge discounts from original listing prices. “People always say, ‘What’s the discount?’ The problem is, when people look at discounts, they figure in houses that were overpriced by 50 percent or more,” he said. “And then, all of a sudden, when they sell for 50 percent less, they’re saying, ‘Well, that’s the discount.’ We know that’s not the discount. Discounts are more in line with 10, 15 percent.”

According to Mr. Lorber, when a seller wants to put an inflated price tag on a property, a good broker will try to bring the seller down to reality. But they are not always successful.

He said he can think of three or four examples of homes in the Hamptons that stayed on the market forever before finally selling for much less than the asking price. One was asking $75 million — and sold for $30 million. It never should have asked $75 million, he said, adding, “It wasn’t even on the ocean.”

He said that while prices have adjusted downward, “nobody is giving anything away.”

Mr. Lorber explained that while the bankers and business owners looking for $5 million Hamptons homes may be concerned about their bonus or the state of the economy, the buyers on the high end of the market have no worries. “At the high end of the market, you don’t worry about anything,” he said. “All you worry about is getting what you believe to be a fair price. We’ve see that time and time again.”

And when asking prices began to fall, buyers who had been staying away showed up.

“Pricing has come down, and that’s why you see a lot of buyers coming out now, because they are getting better deals than they would have a couple of years ago,” Ms. Grossman said. She added the caveat that the prices of high-end oceanfront properties have stayed around the same level they were two years ago.

On the best opportunities for investment in the Hamptons, Ms. Grossman pointed to older houses that can be renovated for resale: “A lot of buyers tend to not want to buy something that isn’t brand new and doesn’t look great, and they don’t want to do the work.”

Mr. Lorber said Westhampton, Remsenburg and Quogue have great buys, with oceanfront homes often selling for half the price of homes in Southampton.

Mr. Bailey wanted to know why buyers continue coming back to areas where disasters happen. Mr. Lorber suggested that Americans have a short memory. For example, he pointed to the September 11, 2001, terrorist attacks. He said that by January 1 the next year, all of the deals in New York that weren’t made immediately after the attacks, were made.

That was a man-made disaster, but there was no assurance that it couldn’t happen again, he said. “People just forget,” Mr. Lorber continued, adding that if they want to be someplace, there is no way to stop them.

Mr. de Mallet Morgan suggested that people adapt after natural disasters. In the Caribbean, for instance, he said, St. Bart’s invested in infrastructure and burying cables. “Beautiful places go hand in hand with extremes of nature,” he said.

Speaking one-on-one before the presentation and panel, Mr. Lorber said the Hamptons market is resetting after a number of years of post-recession growth and prices reaching above the past highs of 2008. The loss of the full state and local tax deduction under the 2017 federal tax law had little effect on the market, and a reset was going to happen anyway, he said.

“If they want it and they can afford it, they’re going to buy it,” Mr. Lorber said of wealthy buyers.

He noted that, typically, as the stock market gets stronger, real estate follows. “People are making a lot of money,” he said, but real estate did not follow the market this time. However, he said, real estate may now be catching up.