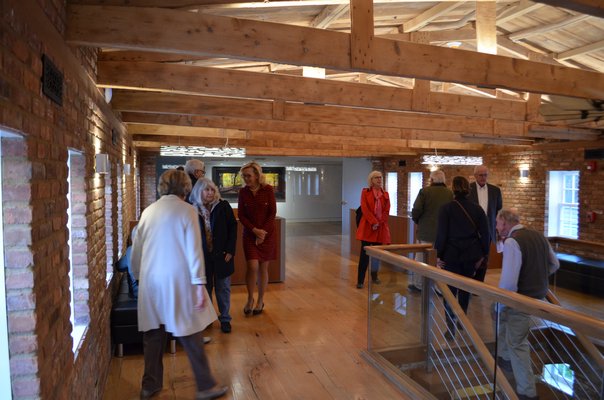 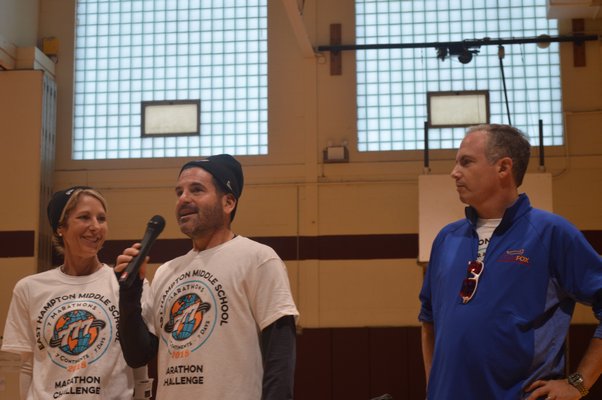 David Samson, flanked by Bret Parker to his right and Deb Carneol to the left, speak to Cara Nelson's seventh-grade class. 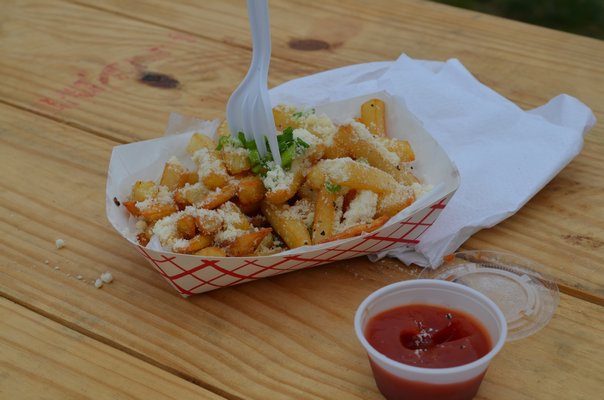 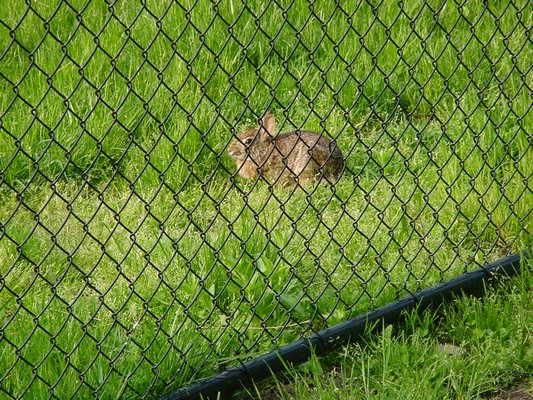 A chain-link fence is only a minor obstacle for a rabbit. Fast and efficient diggers, they can get under fences with little effort. Fencing must be buried nearly a foot deep to prevent rabbit entry. ANDREW MESSINGER 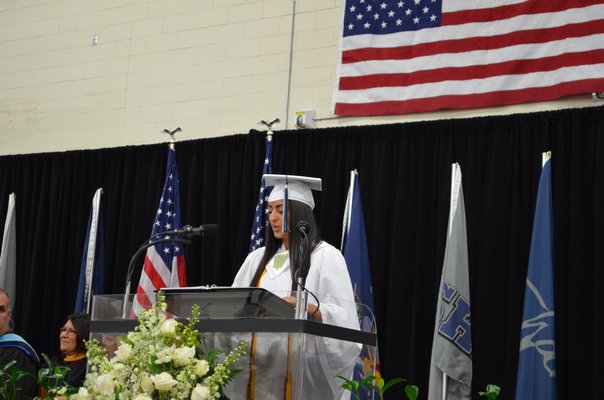 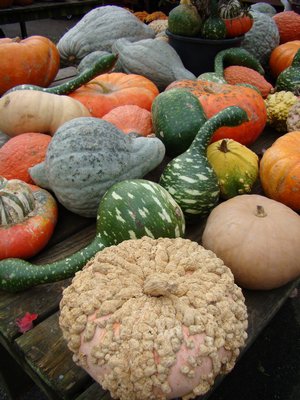 Freshly dug cannas tubers from about 10 plants with roots intact. Once washed and cured, these will be stored dormant until next spring. ANDREW MESSINGER 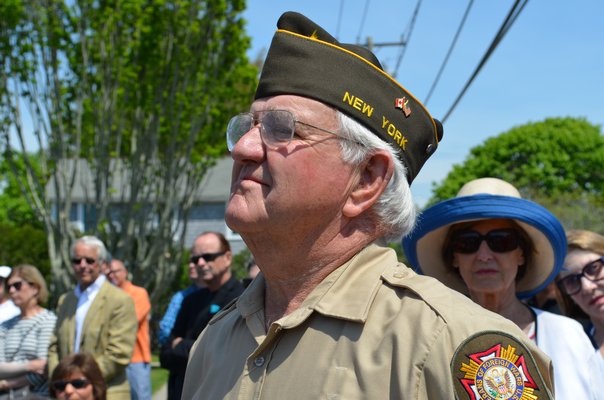 Bob Murray, of the Quogue Veterans of Foreign Wars Post 5350, served in the Vietnam War from 1963-1966 as a lieutenant in the Navy. Alexa Gorman 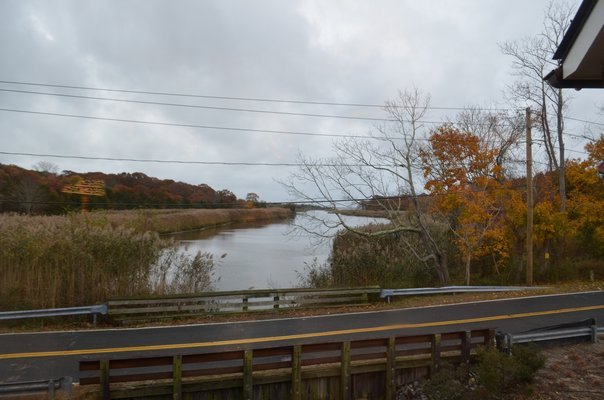 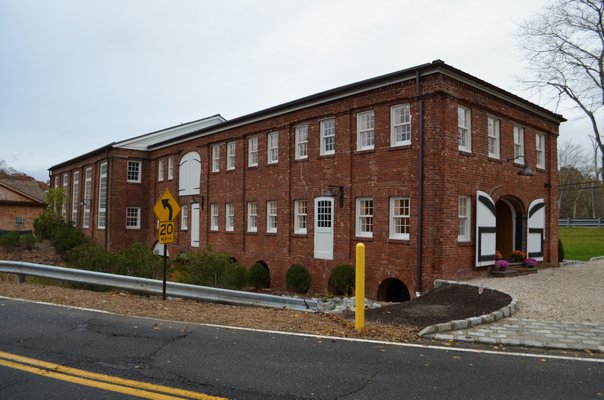 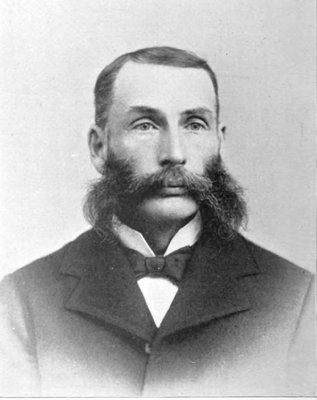 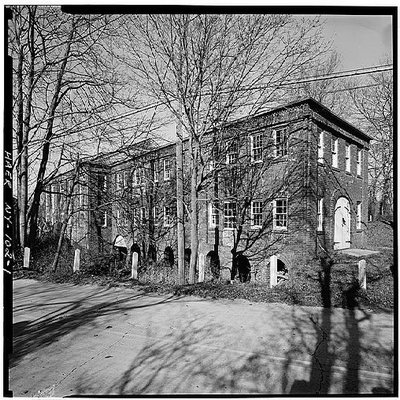 While the John and Elaine Kanas Family Foundation makes its final steps to move into the newly restored Fordham Mill in Speonk, the Westhampton Beach Historical Society wanted to recognize the couple’s preservation efforts.

The society presented its first-ever Historic Preservation Award to the family foundation on November 5 at the mill property, located at the junction of Montauk Highway and Old Montauk Highway. The 159-year-old mill, sometimes referred to as Tuttle-Fordham Mill, to include its original owners, is a designated Town of Southampton landmark.

“History is important to the fabric of our communities,” Marsha Kenny, a trustee of the historical society, said in a statement before the presentation. “To encourage local historic preservation, the society’s board of directors has created an award that will recognize the preservation efforts of individuals, businesses, communities and municipalities.”

Lauren Barlow, the historical society’s recording secretary, said that there had been concerns from community members over the years about the future of the deteriorating historic mill. “A lot of people wanted to see it restored,” she said. The building had been vacant and on the market for over a decade before its purchase by the Kanases.

“Like most people, I’ve been looking at that building for many years, trying to figure out what could be done with it and how to restore it,” Mr. Kanas said. “We’re thrilled at the recognition and that others understand how important that building is, as well as the family does. We can’t wait to get to work in there.”

Mr. Kanas, a retired banker, and his wife, Elaine, acquired the property—which includes the mill and another building to the west—in March 2017 and began renovations soon after. They restored the original layout and structure of the brick mill and made major changes to the newer, wooden building on the west end.

The open space in the newer building was divided into five office suites that will be available for rent, Mr. Kanas said, adding that they are currently negotiating with three potential tenants. He could not provide any information on the potential tenants.

The couple plans to use the mill as a headquarters for their charity foundation, which donates to various organizations and companies on the East End and throughout Long Island, including the Peconic Bay Medical Center and the East End Hospice. Prior to Mr. Kanas’s retirement, the foundation was operated out of his offices at BankUnited.

“It gives us a lot more visibility,” Mr. Kanas said of the new space. “We’ll be out here two days a week at least, maybe three, and we’ll be able to host meetings there, have a closer affinity to the community and be able to outreach more from that space.”

He added that the new space will also be used to manage the family’s real estate properties and other family resources. “The family owns lots of different pieces of real estate that we have restored, some of which are in Southampton Town,” he said. “I’m a sucker for old buildings and historic preservation and trying to bring things back to what they once looked like.”

Mr. Kanas said on November 3 that the building is awaiting approval from the Suffolk County Department of Health Services for its septic system—something he said he expects to happen soon—before all tenants are able to move in.

Jon Stanat, president of the historical society, presented the glass plaque to the Kanases at the event after thanking them for their work. He read aloud what the plaque said: “In grateful appreciation to the John and Elaine Kanas Family Foundation for restoring the historic Tuttle-Fordham Mill. Its preservation and appropriate reuse acknowledge the building’s importance to our community history.”

State Assemblyman Fred W. Thiele Jr. and Brookhaven Town Supervisor Ed Romaine were among those in attendance. Someone in the group joked that the Kanases were able to get Mr. Romaine out the day before Election Day, to which he responded, “This is far more important than Election Day!”

He presented the Kanases with a signed proclamation that names November 5 as The John and Elaine Kanas Family Foundation Day in the Town of Brookhaven.

“Even though this is slightly over the border—not much—history knows no boundaries,” Mr. Romaine said, referring to the mill’s location just east of the Town of Brookhaven border.

Ms. Barlow is part of the Tuttle family, who originally built and operated the mill. She said that her great-great-great-grandfather, Daniel Tuttle, built the mill in 1859 to run his carriage manufacturing business. His two sons, Elias P. Tuttle and Lewis Tuttle, the latter Ms. Barlow’s great-great-grandfather, were successors of the business until the 1890s, when they sold it to Everett O. Fordham, who went on to use it for lumber and millworking.

“We’re absolutely thrilled that Mr. Kanas stepped forward and preserved it and kept so much of the original character in place,” Ms. Barlow said on behalf of her family, who attended the event with her cousin, John Phillips.

A rebuilt and expanded 1902 ŌĆ£cottageŌĆØ on 2.3 acres in Bridgehampton with access to Sagg ... by Staff Writer

A split Southampton Village Board of Architectural Review and Historic Preservation has started the landmarking ... by Brendan J. OŌĆÖReilly

The State Legislature sent Governor Kathy Hochul a bill on Tuesday, September 28, that would ... 29 Sep 2021 by Brendan J. OŌĆÖReilly

A new state law has clarified that deposits and advance payments for seasonal rentals are not subject to caps, which means that landlords can collect rent for an entire summer upfront. Assemblyman Fred W. Thiele Jr. penned the legislation, which Governor Kathy Hochul signed last week. It was designed to make clear that limits imposed by New York StateŌĆÖs Housing Stability and Tenant Protection Act of 2019 only apply to permanent housing, not to vacation rentals. Prior to the Housing Stability and Tenant Protection Act, it had been common practice for East End landlords require a single payment for the ... 28 Sep 2021 by Brendan J. OŌĆÖReilly