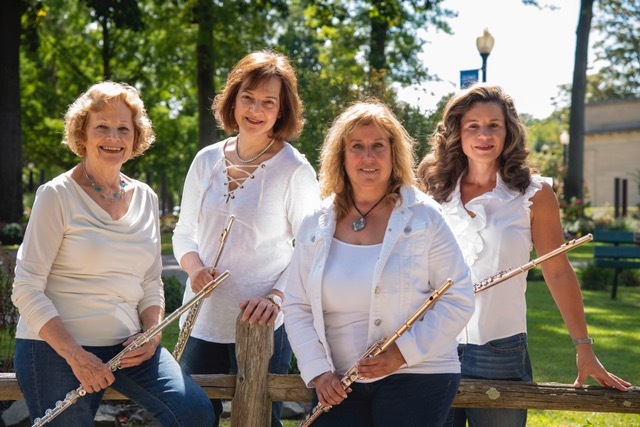 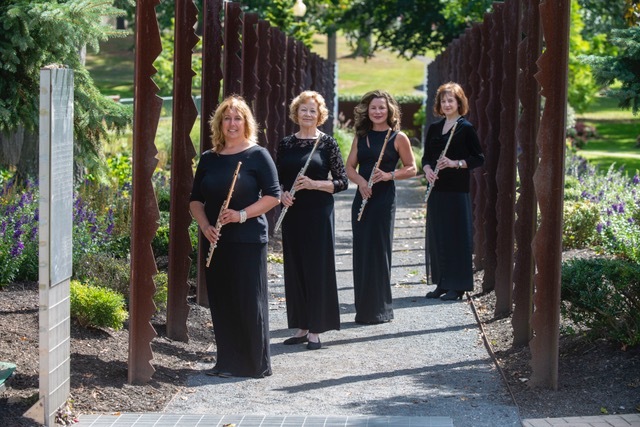 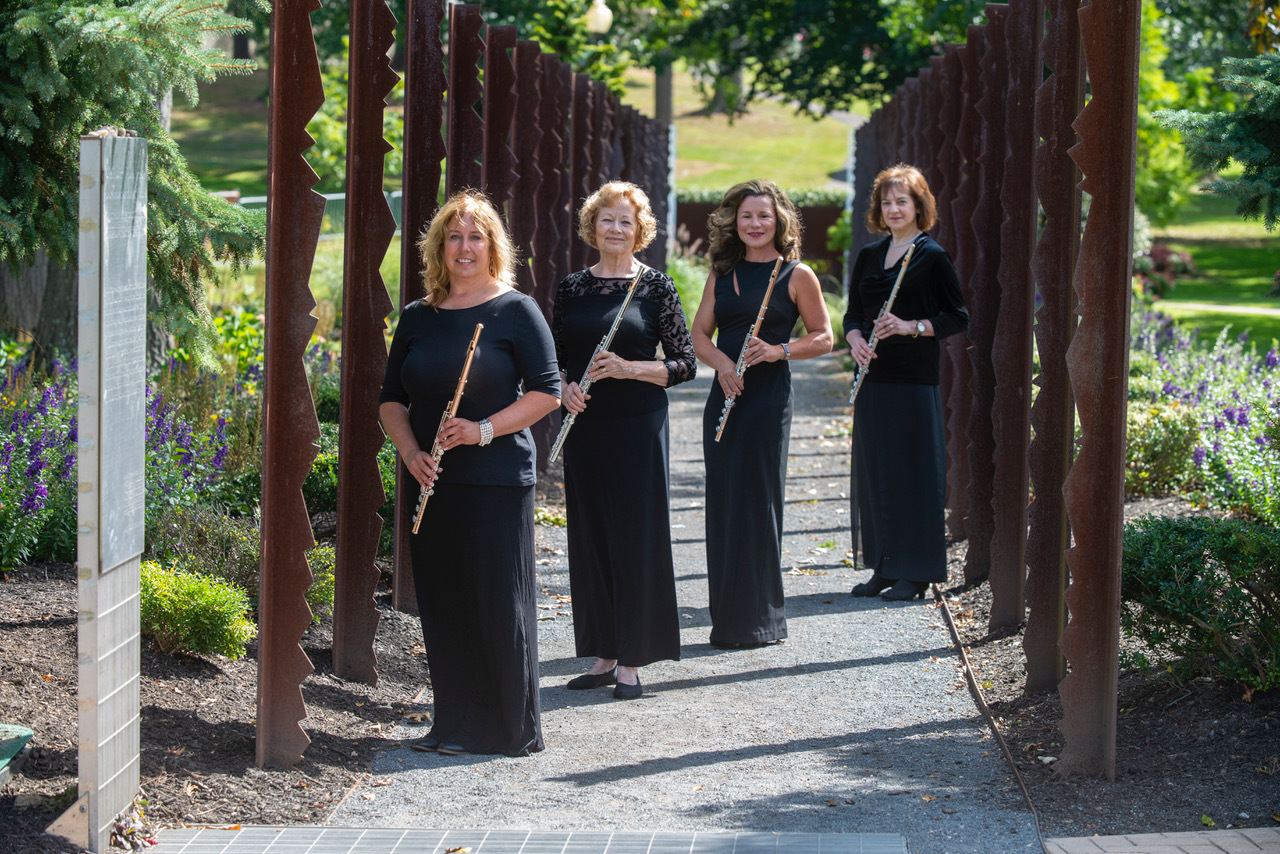 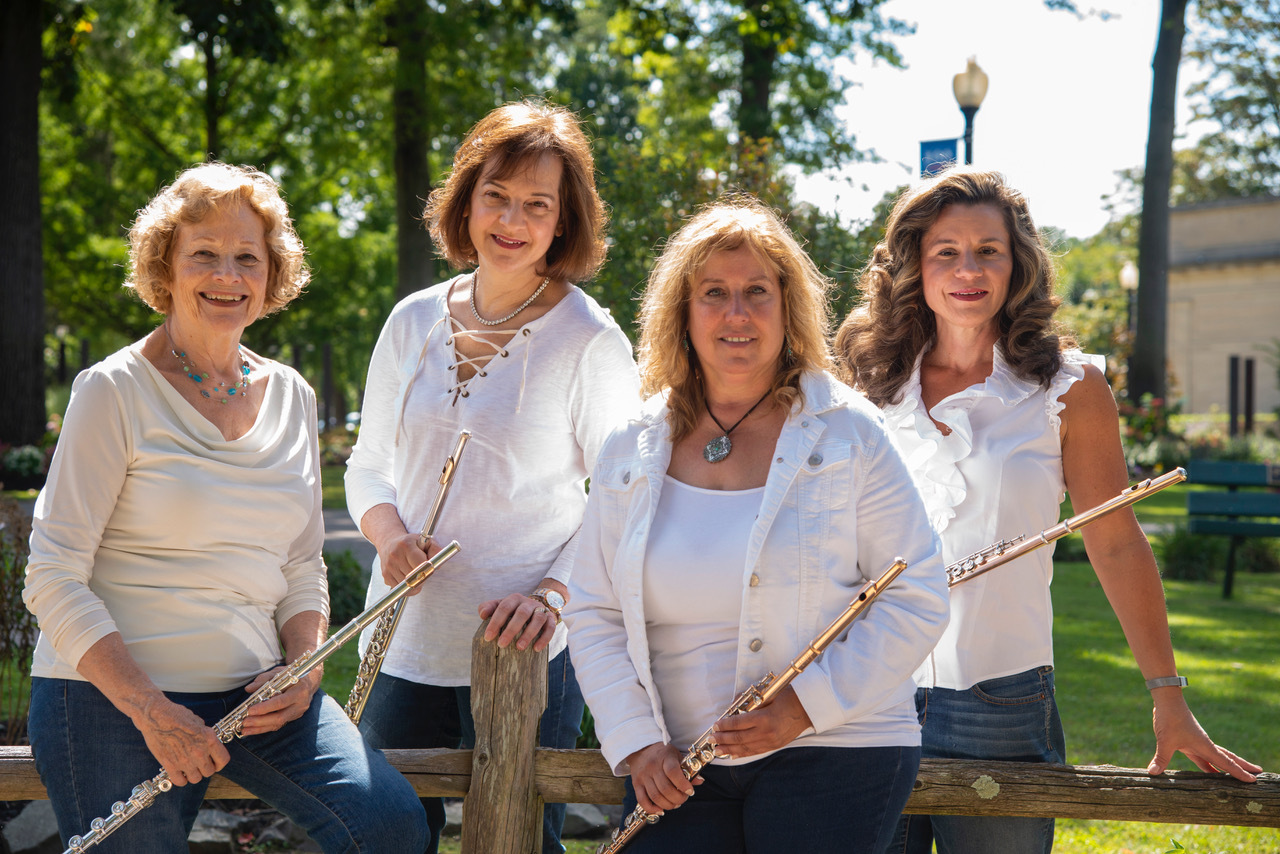 This past year of pandemic has been difficult for everyone, but for those whose artistic talents involve channeling their breath — something no one is interested in sharing these days — COVID-19 has been a true game changer.

The Remsenberg resident is one-fourth of Flutissimo! — an all-female flute quartet established in 2003 whose members live across Suffolk County and as far west as Huntington. Haley not only lives furthest east, she is also the newest member of the quartet, having joined just two years ago. While the four flutists typically gather in person once a month to rehearse, and then on a weekly basis as they get closer to a performance date, all that has been put on hold since last year.

“Two of the members of the quartet are of a certain age and high risk, so we didn’t rehearse until August, and then we started rehearsing outside on a patio,” explained Haley in a recent phone interview.

But rehearse they did, and this Sunday, April 18, at 2:30 p.m., Westhampton Free Library will present “A Spring Bouquet,” a virtual concert by Flutissimo! to herald this new season of rebirth. The concert will feature Haley, Claudia Beeby, Leslie Strait and Jerene Weitman presenting compositions apropos for this time of year on C, piccolo, alto and bass flutes. A range of themed musical offerings are on the program, from Nikolai Rimsky-Korsakov’s “Flight of the Bumblebee” to Antonio Vivaldi’s “Spring” from “The Four Seasons.” But it’s not just centuries-old compositions audiences will hear. Also included in the lineup is “Dune Beach” by Jane Leslie, a Nassau County composer. Over the years, Leslie has spent a great deal of time at a family member’s home in Southampton and she was inspired to write the piece by Dune Beach on Meadow Lane in Southampton Village.

Haley explained that this performance was originally scheduled to take place a year ago, but like much of life, it was postponed at first, and then like so many other live events, completely canceled when COVID-19 showed no signs of letting up last spring.

That’s when the musicians had to rethink not only how they would practice — Haley notes that using Zoom was “virtually” impossible for the musicians due to the lag time inherent in the program — but how they could present their music to the public as well.

“You started seeing musical groups doing virtual performances. We said if we’re going to maintain relevance, we have to go with that,” Haley recalled. “We found a gentlemen to do video performances of us and he put together some programs. We called the library back and asked, would you be interested if we could do it virtually?”

The Westhampton Free Library agreed, and so late last year, the quartet met to record this concert video at the Heckscher Museum in Huntington, where they have performed frequently in the past. Haley notes the group has been meeting in person since January and is looking forward to being able to perform live again in the not too distant future.

Over the years, Haley has worked as the principal flutist of the Adelphi Symphony Orchestra and performs regularly with the Atlantic Wind Symphony, Sound Symphony and Long Island Professional Flute Choir. But interestingly enough, she is not only a trained musician with a performance degree from Indiana University, but she also has her doctorate in child psychology.

“I started out as a music performance major in Bloomington [Indiana], but coming back to New York, I got cold feet and thought, am I going to make a living doing this?” she said.

Unsure of her ability to support herself through music, Haley went back to school and earned her master's degree in education as well as a doctoral degree in child psychology from Pace University in Manhattan.

“The irony is, as I worked toward the degree, I didn’t stop playing and was paying for everything through teaching and performing music,” she notes.

In the years that followed, Haley worked as a psychologist for the Longwood School District, but she left that job after having her own children, who are now 13 and 10. She no longer works as a child psychologist, but now spends 20 to 25 hours a week teaching music privately to two dozen or so local kids. She also hosts a flute choir in the summer, inviting some of her students to come play and learn more when they’re not in school.

“There are no egos, it’s not a competition but for fun,” said Haley of the program, noting that in the real world of classical music, that isn’t always the case.

Though at first glance, being a trained musician would seem to have nothing to do with child psychology, having that sort of training can come in handy given the personality clashes that can arise in the world of classical music. Haley admits she has seen her share of personality clashes among musicians.

“Sometimes, ego gets to be a really big problem. What I find is that personalities in junior high and high school stay the way they were,” she said when asked about the dynamics that can arise in classical groups. “If I’m phrasing something and someone else thinks it should go a different way, will my ego be OK? Are we forgiving of each other?”

Fortunately, Haley is happy to report that none of this has ever been an issue with her fellow musicians in Flutissimo!

“Everybody plays at an extremely high level. With most groups at this level, the problem is not the technical ability, but do personalities match,” explained Haley. “Musically, there’s no problem and we do get along. When you meet every week for two years, you become very close and build a relationship.

“I’m very happy with this group.”

“A Spring Bouquet,” a virtual concert by Flutissimo! will be presented on Sunday, April 18, at 2:30 p.m. by the Westhampton Free Library. To register, visit westhamptonlibrary.net.