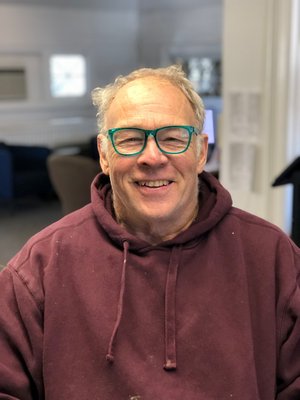 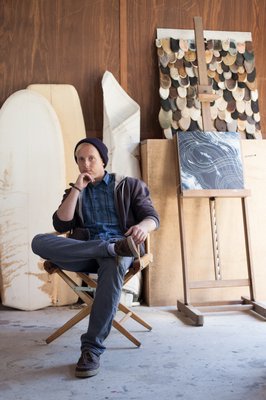 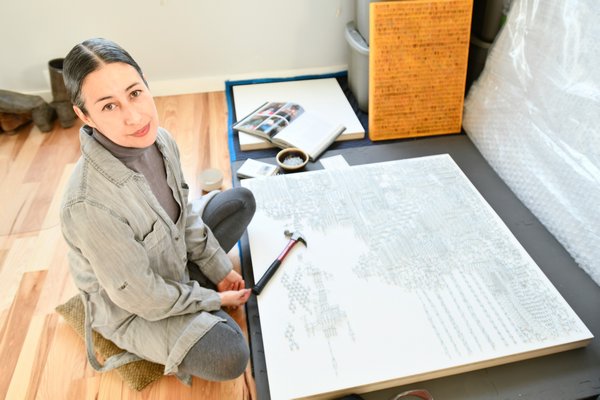 Darlene Charneco is using her space to work on an art form she calls prayerweaves as part of her “Weaves” and “Touchmaps” series. DANA SHAW

Beginning in early February, the galleries of the Southampton Arts Center will become a place to go not just to see art but also to see art being made.

“Takeover!” is literally that—an artists-in-residence exhibition curated by Southampton Arts Center artistic director Amy Kirwin in which nine local artists will move into the galleries and, for seven weeks, take over the space as their own working studios. Think of it as a unique “pop-up” twist on the concept of the studio tour, but without the need to travel from one location to another.

“This idea is expanding the artist-in-residence into galleries and an exhibition. To a degree, they’ll be re-creating their studios here,” explained Ms. Kirwin during a recent walk-through of the arts center. “Getting access to someone’s studio is really reserved for a certain group of people. Not everyone has that opportunity, so this allows them to re-create that here on every level, and people will get to see them working.”

The concept provides each artist with a designated working area in the arts center galleries that they are encouraged to make their own. That means bringing in favorite objects from their permanent studios, be it working materials, furnishings, lighting, knick-knacks or even a ping-pong table.

That’s right: Southampton artist Paton Miller, who was the first to set up his working space because of upcoming travel commitments, will be making art in close proximity to fellow artists and ping-pong-playing friends Jeff Muhs and Jerome Lucani. A ping-pong table conveniently located in the center of the space will allow the trio to take inspirational breaks and burn off a little competitive steam as they work.

“Whether it’s a favorite chair, books or things that inspire them, they’re not only working there but they’ll decide what they have around them to create their works,” Ms. Kirwin explained. “They’ll also have some completed works already installed, and you can watch progress of new works.

“We want to encourage collaboration, too, and the areas they’ve been assigned will allow them to build off relationships they may already have,” she added.

Ultimately, the goal of “Takeover!” is not only to make the artists feel at home in the space but to encourage interaction with the public as well. Besides artist-led workshops for all ages, every Thursday evening during the residencies Southampton Arts Center will transform into a “hangout” from 6 to 8 p.m., where community members can enjoy a drink, socialize, listen to music, and watch the creative process in action.

“We’ll also have a piano for music and do some poetry readings or performances,” added Ms. Kirwin, who noted that in selecting the artists for the show, her first goal was to ensure that a range of media was represented.

“A photographer wouldn’t work, but painting, drawing, sculpture and weaving would. In many cases, they were people I knew or those who were recommended,” Ms. Kirwin said. “They have to be comfortable with the idea of working with people watching them, and they have to complete a certain amount of time here. They can also continue working outside the museum hours.”

East Hampton-based artist Scott Bluedorn is one of the participants in “Takeover!” He is drawn to historical East End imagery. Colonial-era buildings, wooden boats, whales, nautical objects and structures that speak to an earlier time and way of life are often the subjects of his art.

“The next step for me is bringing what I draw into 3D form. I’m going to be doing a combination of things, including a kind of assemblage I’ve been working on for about a year now,” he said in a recent interview. “It’s one of my drawings brought to life in three dimensions—a whale form and local architecture made out of wood.”

Mr. Bluedorn is also planning to use part of his time at Southampton Arts Center working in collaboration with fellow artist Daniel Cabrera to build a traditional reed boat.

“Most people know them from the Andes, but we’ll be building it from phragmites—turning something invasive into something useful,” said Mr. Bluedorn, who expects the boat to also be a seaworthy object.

Speaking of objects, among those filling Mr. Bluedorn’s studio space at Southampton Arts Center will be a “wonder cabinet” containing nautical antiques, rocks, shells, masks and other specimens he finds interesting. He notes that the collaborative setting of “Takeover!” is a familiar one, given that he already shares his studio with another artist and enjoys working in public spaces.

“I like to engage with an audience,” he said. “I think my work is so full of content, people are curious about things and I can explain the context, history and story behind the work.”

Mr. Bluedorn’s time in the space will be limited due to prior commitments, so he plans to make the most of it when he is there by putting in 10 to 15 hours per day. That’s the kind of dedication Ms. Kirwin is looking for in the chosen artists.

“In some cases, the artist might be away a week here or there, but there’s always someone in the gallery,” she said, adding that because some of the artists are currently between studios, she expects them to be at Southampton Arts Center full time during the seven-week exhibition. “But even if they’re not here, you can see their work and come back and see how it has progressed.”

Darlene Charneco is using her space to work on an art form she calls “prayerweaves” as part of her “Weaves” and “Touchmaps” series. The weaves she refers to are created by building up layers of nails on wood to create patterns. The piece is then thickened with glues and paints.

“These are works that are gradually built up by a slow ritual of hammered nails and are like writing to me,” Ms. Charneco said in an interview. “One nail for one positive wish or visualization for humanity. The nails aggregate to build up a topographical space of sorts.”

Ms. Charneco will have a few completed works on view from her recent Chelsea show “FutureNurture” in order to give visitors an idea of what the finished pieces look like as they witness the different stages of the process.

“I’m also planning to work on the ninth ‘page’ in my Book of Hope series, which was started in 1999 and has continued with one page created every few years,” Ms. Charneco said. “Each of these sculptural pages contains a specific text of hopes for humanity encoded into a sequence of tactile hammered nails.

“Reading, writing and thinking are also a big part of my process. So I’ll also be sketching and working in books and notebooks,” she added.

For 20 years, Ms. Charneco lived in Southampton and worked from her home studio. Last year, she was the recipient of a Pollock-Krasner Grant that enabled her to rent a separate studio in Sag Harbor. But due to a recent move, Ms. Charneco is one of the “Takeover!” artists who is currently between studios, so she is happy to have access to the Southampton Arts Center as her temporary work space.

“Recently, I’ve needed to relocate out to Westhampton Beach, so my actual studio feels ‘in transition’ right now as I look for my next space,” she said. “Which is another reason this residency is such a perfectly serendipitous space-timed event.”

Ms. Charneco’s artistic process is usually solitary and meditative. Though she’s admittedly a bit nervous about working in public, she is also intrigued by the challenge.

“I’m very interested in the conceptual and energetic experiment of doing this type of work in a shared space and openly, including and combining energies and sending them out,” she said. “I’m happy to already be friends with many of the other artists who will be there, and it’s going to be great to get to spend more time with them and also to get to know the others.”

A public art demonstration in the Southampton Arts Center space back in 2008—when the facility housed the Parrish Art Museum—served as great inspiration to Ms. Charneco. A group of visiting Tibetan monks were meticulously and slowly creating a sand mandala of compassion on the floor of the gallery, and she would often spend time with them before going back into the studio to make her own art.

“I was so very grateful for and inspired by this sense of combined energies being part of my work in progress and what it meant in the world,” Ms. Charneco said.

Now, she’s happy to have come full circle by using the Southampton Arts Center space to create her own visions and as part of her residency, Ms. Charneco will be hosting five “memory-mapping” workshops—four for children and one for adults—which involve using cut paper to create art map collages of familiar spaces.

“These maps become storyboards to navigate and share embedded spatial memories with each other and in my mind are part of a larger vision of what is occurring collectively,” Ms. Charneco said. “They are really fun.”

“Takeover!” opens on Saturday, February 9, with a free reception from 5 to 7 p.m. and runs through Sunday, March 24, at Southampton Arts Center, 25 Jobs Lane, Southampton Village. Artists will have scheduled studio time from Thursday to Sunday, noon to 6 p.m. with “hangouts” every Thursday from 6 to 8 p.m. A full schedule and workshop information can be found at southamptonartscenter.org.