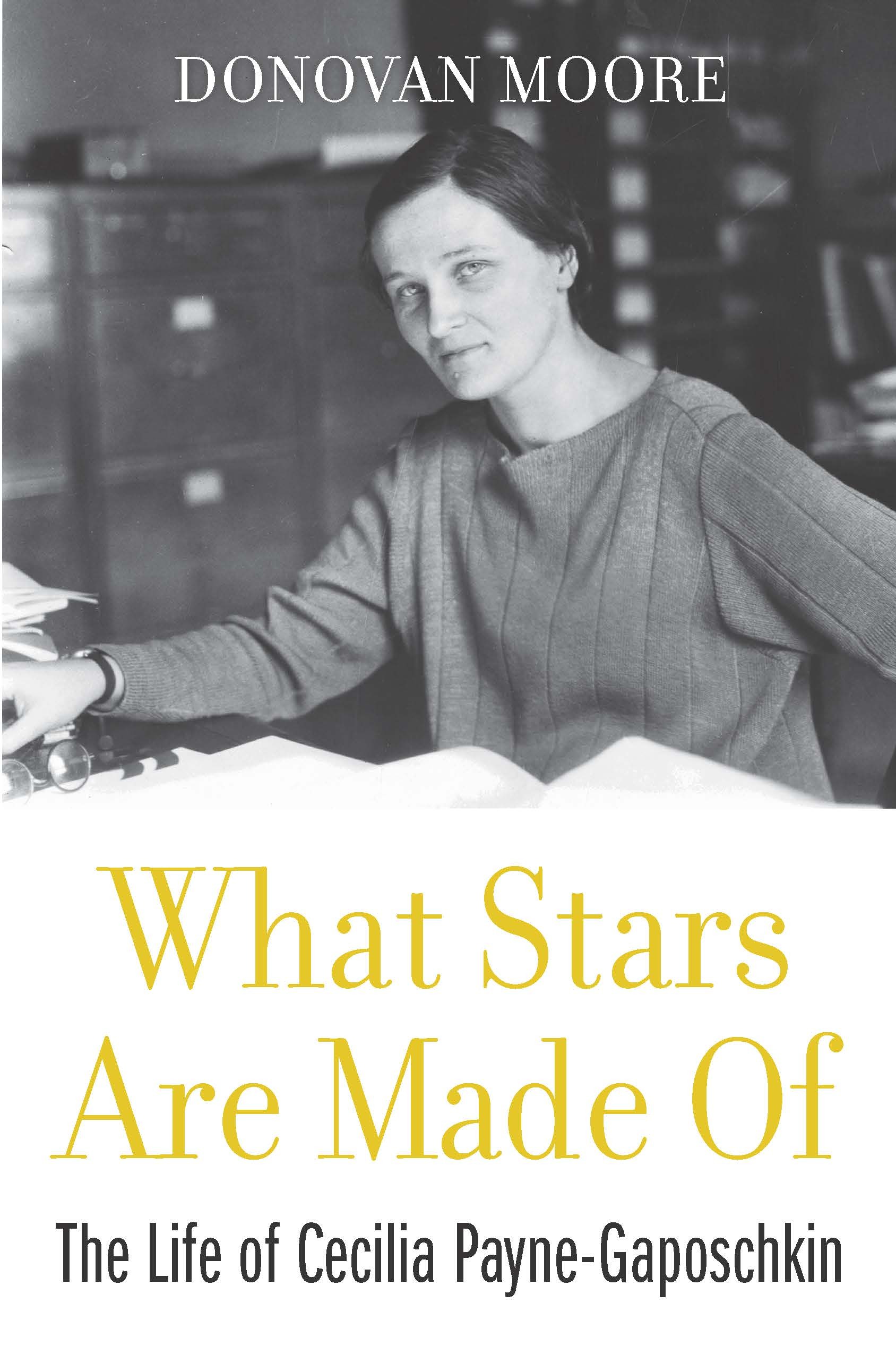 The cover art for the book "What Stars Are Made Of."

In the male dominated scientific field of the early 20th century, Cecilia Payne-Gaposchkin aimed for the moon and made a fundamental discovery. But because she was a woman, she did not receive credit for her accomplishments.

Payne-Gaposchkin’s life story as a scientist working in a man's world is told by Water Mill author Donovan Moore in his new book “What Stars Are Made Of: The Life of Cecilia Payne-Gaposchkin." On Thursday, July 16, Moore will talk about his book and its subject in a Zoom presentation sponsored by Rogers Memorial Library.

And what a life she had. Payne-Gaposchkin's contribution to the field of science was nothing less than astounding — the discovery of the composition of the stars. Yet her work was overlooked.

“The learned men of science could not believe that a 25-year-old woman graduate student could make such a fundamental discovery,” said Moore. “In fact, she was told she was wrong by the very man who later proved her to be correct.

It seems Moore was motivated to write the book by the same force that motivated Payne-Gaposchkin in her findings, “The hunt for discovery, the relentless need to know,” he said.

The idea for the book was born when Lanny Jones, a friend of Moore, sent the author materials from an astronomy course he was auditing at Princeton University. While leafing through the papers, Moore came upon a page with unnamed photos of Aristotle and Newton, who he immediately recognized, and a woman whom he did not.

Intrigued, he began looking into who she was.

“What I found was this amazingly inspirational story of a woman who had to overcome unbelievable obstacles — personal, professional, academic — to make one of the most fundamental of scientific discoveries," Moore said. "And no one had written a book about her."

So Moore decided to change that.

He began delving into his subject and said that he enjoyed everything about writing the book, especially the research. Moore visited London, where Payne-Gaposchkin, who was born in 1900, grew up, and Cambridge, where she attended college. He said he rode a bicycle for a week, night and day, all over Cambridge because he wanted to know what it was like for the young scientist while she attended the university in the 1920s.

After that trip, Moore then visited Harvard University, where Payne-Gaposchkin worked as a professor. He spent many hours in the university’s archives.

Though Payne-Gaposchkin died in Cambridge, Massachusetts in 1979, countless hours were also spent interviewing people who were familiar with her at Cambridge in England and at Harvard, as well as her family members.

“I soon realized that throughout Ms. Payne-Gaposchkin’s life, first at Cambridge University and then at the Harvard College Observatory, she crossed paths with an extraordinary number of colorful characters,” said Moore. “Some were world famous — Arthur Eddington, Ernest Rutherford, Niels Bohr, Harlow Shapley — some were not known at all, but were wonderfully offbeat. I researched every one of them so that I could bring each of them to life.”

As the research and writing progressed, Moore found himself admiring Payne-Gaposchkin more and more, especially her focus and her “unrelenting need to understand nature,” he said. “Early on at the Harvard Observatory, she once worked for 72 hours straight. She described it as ‘marvelous.’”

“Her focus served her — and science — well,” Moore added. “Derided in class, paid poorly, denied teaching credit, making one of the most fundamental discoveries in the history of science and then being told she was wrong — none of those things mattered. She just stepped on every obstacle that got in the way of discovery.”

After conducting research and creating a manuscript, Moore submitted his work to be rigorously reviewed by Harvard University Press, an academic publisher. It was read for both historical and scientific accuracy.

Now that the book is in print, Moore feels there are many parallels between Payne-Gaposchkin’s story and what is going on in the world today.

“If people of a certain gender or race are denied opportunity — if the Cecilia Paynes of the world are not allowed to have the chance to develop their full potential — we all miss out,'' said Mr. Moore. “Be careful what you assume ...”

Moore added that he is looking forward to the library event and the opportunity to share Payne-Gaposchkin’s life story. “Not because it benefits me personally — that's not why I wrote it,” he said. “It's because Cecilia deserves it, because her triumph is such an inspiring story. And we certainly can all use some inspiration in these trying times.”

For the record, stars are composed primarily of hydrogen and helium. You can thank Cecilia Payne-Gaposchkin for knowing that.

Rogers Memorial Library in Southampton hosts Donovan Moore in a Zoom presentation on Thursday, July 16, at 5:30 p.m. Other local libraries will also participate in the event. To learn more about the book and register for the event visit myrml.org.