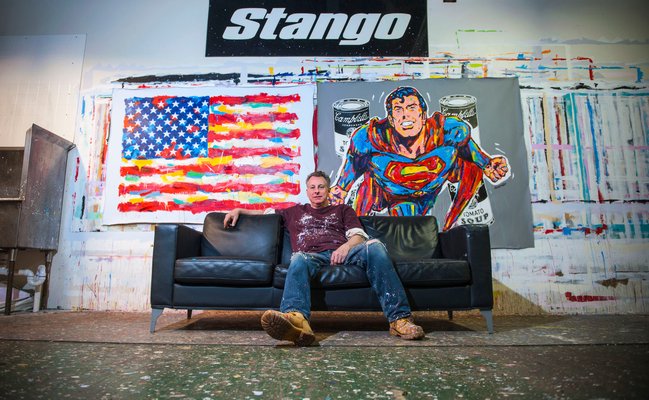 John Stango defines himself as a stand-up comic who happens to paint. And he is also a man who understands the necessity of elbow room—3,000 square feet of it, to be precise.

He found it in a historic, circa-Civil War era mill in the heart of urban Philadelphia, a city he is proud to call his lifelong home. It matches his quick wit and sharp mind, which often sets him on mile-a-minute ramblings, rants and stories. His high-energy is difficult to rein in—and he doesn’t bother trying.

His warehouse-sized studio allows him to mount five or six canvases at once. On any given day, he draws the curtains, cranks up the radio, and runs from one painting or silkscreen to the next, wielding a handful of brushes. His spontaneity keeps the boredom at bay, he says.

The only trouble is, there is no air conditioning. So on the steamiest of days, he strips down.

“I am very serious,” he deadpanned during a telephone interview last week from his home in the suburbs. “Most of the paintings I’m bringing to the Hamptons, I did in the nude. I’m your naked Pop Art painter.”

His upcoming solo exhibition, opening Saturday, marks his return to Chase Edwards Contemporary Fine Art in Bridgehampton, though he didn’t make the trip for last summer’s group show. This will be his “virgin cruise,” he said, and the artist plans to bring a slate of his newest work inspired by the “Mad Men” era, as well as bold, colorful fan favorites—among them his signature American flags, Chanel bottles, superheroes and celebrity portraits.

“I basically have a lot of fun. If it’s not fun, I don’t want to do it,” he said. “I don’t know where I got my style. It’s what it is. It’s how I developed. I just do what I do. My mom’s also an artist, and I would watch her draw. I’d get inspiration from her, always.”

Mr. Stango’s earliest artistic memories revolve around stenciling signs for his father’s barbershop—particularly the “John-John” haircut, named after John F. Kennedy Jr., for $3—doodling on his sneakers, and drawing cartoons on the blackboards in school, which his teachers didn’t mind, he said. They kept his classmates quiet, and he would be sent from room to room. It was his first tour, he likes to say.

At age 9, he discovered a book of colorful posters by artist Peter Max at the local mall. And it was then he decided he wanted to be a “psychedelic artist,” he said.

“My parents encouraged me, as long as it was in my room,” Mr. Stango laughed. “They didn’t want to put my stuff in their living room.”

It was around that time that a young Mr. Stango began asking about his lineage, considering his mother’s maiden name was Frances Elaine Rockwell. Every time he asked if they were related to the great Norman Rockwell, she would evade the question and shut him down—until, one time, she didn’t.

“She finally came forward and said, ‘Norman Rockwell’s my cousin,’” he recalled. “I’m like the city mouse and he was the country mouse. He was America’s artist, and I’m the American artist. My work is so different from his, but he was, basically, the first pop artist. There is so much derived from all his paintings.”

He paused, and continued, “So, thank you, Norman—or Cousin Norman, I should say.”

“This is … John Stango!” will open with a reception on Saturday, June 27, from 6 to 9 p.m. at Chase Edwards Contemporary Fine Art in Bridgehampton. Mr. Stango will also visit on Sunday, June 28, from 1 to 4 p.m. The show will remain on view through Saturday, July 11. For more information, call (631) 604-2204, or visit chaseedwardsgallery.com.