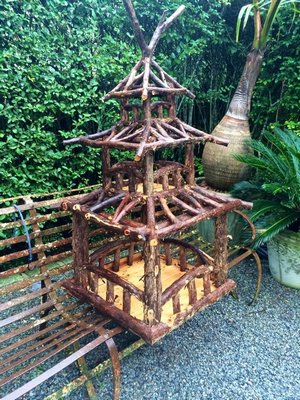 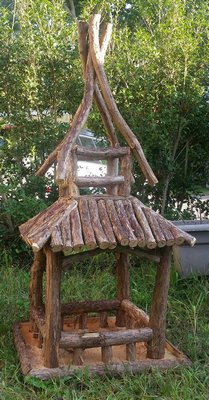 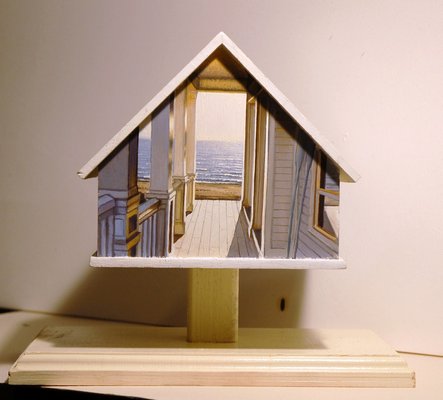 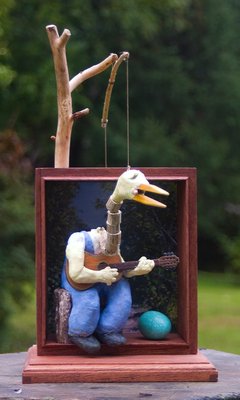 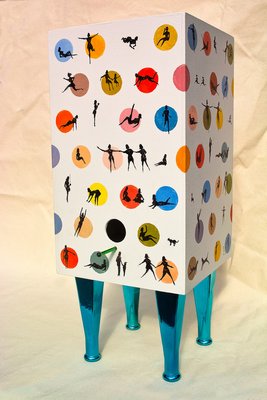 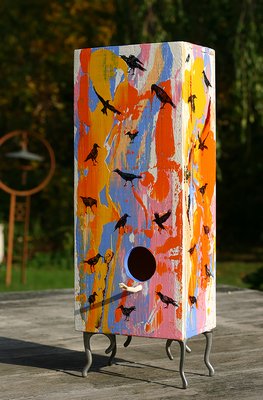 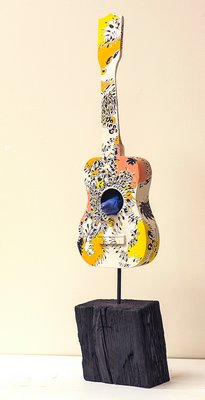 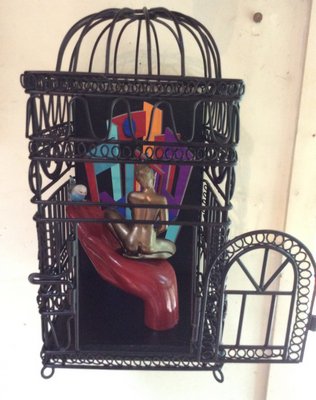 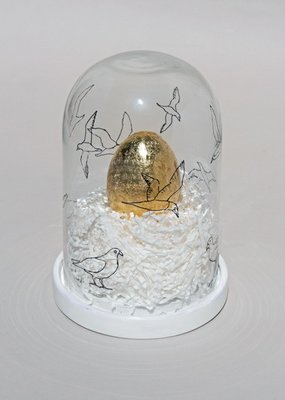 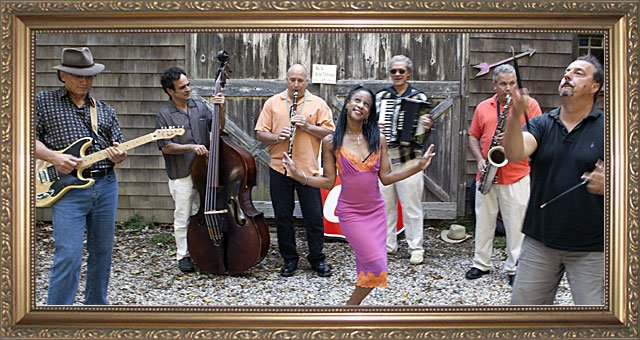 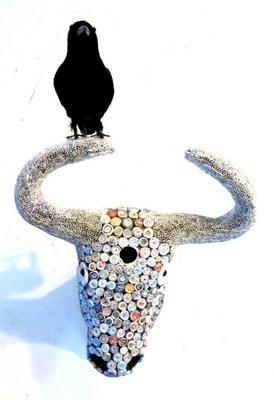 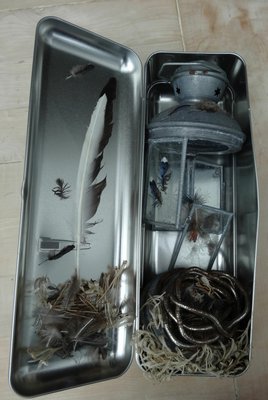 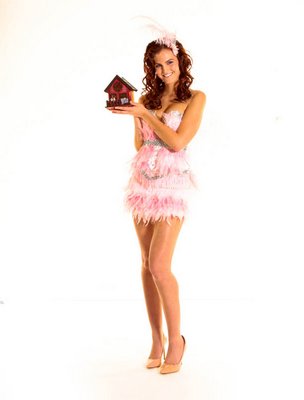 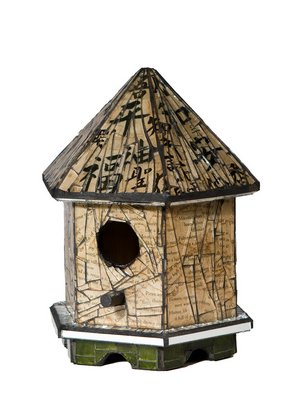 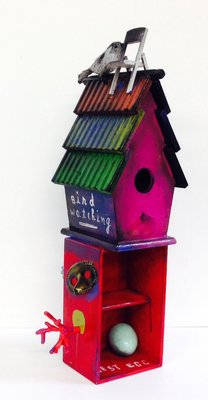 For decades, Eric Ernst has brought canvases to life with paints and brushes. And, once every year, he flies his two-dimensional coop in Sag Harbor and takes a much-needed break from his everyday norm.Enter the Artist Birdhouse Auction—an annual fundraiser benefiting Lucia’s Angels and the Coalition for Women’s Cancer at Southampton Hospital, now in its 10th year, that allows the artist to spread his wings and put his own twist on a traditional birdhouse, or to create one from scratch.

“It’s just a different approach. It allows you to sort of step outside your normal, limiting work habits,” Mr. Ernst said last week during a telephone interview. “You’re working a more three-dimensional frame.”

But the birdhouse Mr. Ernst designed this year—an ornate wrought-iron cage occupied by a mannequin’s hand cupping a female figurine—will be his last.

And not just his. Everyone’s.

The Birdhouse Auction and this year’s 100 participating local artists—an all-time high—will say goodbye on Saturday, October 18, at the Southampton Social Club, after years of over-the-top designs featuring everything from mailboxes and globes to windmills and saxophones. Founder and participating artist Karyn Mannix has decided to lay the quirky theme to rest.

Traditionally held at local art galleries, the auction will go out with a bang, celebrating the thousands of dollars it has raised for Lucia’s Angels, a Southampton-based foundation that helps women and their families with late-stage cancers, as well as the Coalition for Women’s Cancer at Southampton Hospital, where Ms. Mannix, a breast cancer survivor herself, once found solace after her diagnosis in 2004.

The auction, which is among Mr. Ernst’s favorite causes on the East End, pushes the artists and challenges them, he explained.

“You’re given a theme and sort of left to play with it in any way that you can,” he said. “I enjoy doing a number of different things. It basically provides the same release, where you’re just fiddling with something new and you see what happens.”

Artists are given the option of utilizing a generic birdhouse provided by event organizers, but they also have the freedom to think outside the box and construct something from scratch. The birdhouses, however, are non-functioning. They are simply works of art.

Doug Reina has experimented with his creations since his first auction four years ago. The Montauk-based artist started with an “animated birdhouse,” he explained last week during a telephone interview, by tying a string around the neck of a clay bird playing a guitar, creating an illusion of the bird grooving to his imaginary beat whenever the string was pulled.

The next two were all about pop art, he said. And this year, he followed his gut instinct and returned to music. He decorated a ukulele with all sorts of designs, loops and colors, placing a small blue bird in the instrument’s sound hole.

“It has a hole in it already, so it’s perfect for a birdhouse,” Mr. Reina jokingly pointed out. “I didn’t worry about rendering a beautiful theme. I just let the doodle be exciting. I think [I’ve] created something that’s unusual. I don’t think you’ll see anything like it.”

Many who participate have been personally touched by cancer one way or the other. For Stephanie Brody-Lederman and Kimberly Goff, also returning artists, the disease has claimed the lives of both their mothers. They view the Birdhouse Auction as a way to honor them and their battles.

Artist Stephanie Brody-Lederman, whose ideas typically germinate every spring while the East Hampton resident vacations in Paris, has ended her series of birdhouses with a play on “bird watching,” she explained last week during a telephone interview. Instead of being in front of the binoculars, a small bird is perched atop a vibrantly colored structure doing the watching, instead of being watched.

“Expensive Taste,” a piece by Water Mill-based Kimberly Goff, is stuffed with items she thought a bird might like to have—feathers, a necklace, a bone, a pebble and a broken lantern.

While their birdhouses are starkly different from one another, the women have two things in common. They are both returning artists and they both lost their mothers to cancer. They view the Birdhouse Auction as a way to honor them, their battles and their memories.

And though they never will again with birdhouses, the auction is not completely over. It will simply have a new theme next time around.

“It should be good,” Ms. Mannix said. “It’s been very rewarding over the last few years. I like people’s energy that they put into it.”

The 10th annual Birdhouse Auction, featuring live and silent auctions, passed hors d’oeuvres and an open bar, will be held on Saturday, October 18, from 5:30 to 8 p.m. at the Southampton Social Club on Elm Street in Southampton. Tickets are $50 in advance, or $60 at the door. For more information, call (631) 726-8715.