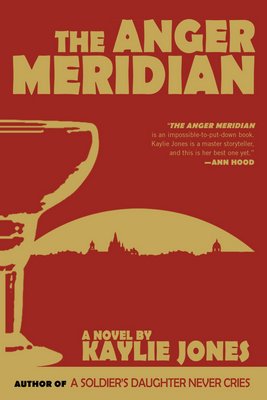 The latest novel by Kaylie Jones, “The Anger Meridian,” (Akashic Books, 288 pp, hardcover $26.95, paper $15.95) is at once a thriller, a psychological study, an experiment in technique and a portrait of the Mexican “Hamptons,” San Miguel de Allende.San Miguel is where Merryn Huntley flees after the Dallas police knock on her door to tell her that her husband, Beau, has died in a car accident. There was a woman in the car with him, a local waitress, who also died.

Merryn’s marriage is a disaster, though she cannot admit it. She has pasted all over the house little reminders of what she should never ask him. “Do not ask him where he’s been. Do not tell him he drinks too much. Do not try to find out about his work. Do not ask him about the money.” By following these dicta she has managed to shore up the illusion of a happy marriage, while thinking that her husband’s business dealings were entirely aboveboard.

After the police leave, she is bombarded by phone calls from her husband’s business partner, the partner’s wife, their secretary and a rather sleazy and frightening Arab client of her husband.

She discovers her bank account and credit cards have been frozen, so she cannot fly to Mexico. She wakes Tenney, her 9-year-old daughter, scours the house for whatever cash she can find, a string of pearls and a Rolex watch, and stuffs it all in the battery box of Tenney’s teddy bear. They drive to her mother’s remote house in San Miguel, the only place she thinks she will be safe.

Her mother, whom everyone calls Bibi, is surely one of the great child-devouring, soul-destroying mothers in literature. Readers of Ms. Jones’s memoir, “Lies My Mother Never Told Me,” will notice a resemblance to her own mother, Gloria.

Bibi lives in a large house on a cliff overlooking San Miguel. She has a circle of friends, a coven of rich alcoholic widows, whose circumstances are much like her own. And she has a young, mopey, Mexican “university student” boyfriend on whom she lavishes her affections.

Merryn’s arrival is not exactly welcomed. Her mother greets her with these scathing words: “You’ve never been able to handle anything in your entire life without my help. What would happen to you, Merryn, if I weren’t here to take care of you?” In her heart of hearts, Merryn believes it to be true.

We see instantly what kind of a relationship this is, even though Merryn, who is the narrator of the novel, does not. Even the highly intelligent Tenney understands. “Bibi is crazy,” she says at one point. “I can’t live with a crazy person.” Bibi is the woman Merryn has always relied on. She is also her worst enemy.

Technically speaking, Ms. Jones is using the device of the unreliable narrator, something familiar from such books as Ford Madox Ford’s “The Good Soldier,” or Kazuo Ishiguro’s “The Remains of the Day.” The narrator is clueless or in denial. We see Merryn’s failings. We know she has lied to herself about her relationship with her mother and her husband, even though she cannot face it. Nevertheless, we empathize with her.

Her husband’s criminal dealings catch up with her when the FBI arrives to ask her questions and determine her involvement. Even though she has always been suspicious, she never actually knew how he made his money. (“Do not try to find out about his work. Do not ask him about the money.”) Without my giving it away, Merryn plays a cat-and-mouse game with the agents, as well as the local police, over what might be yet another crime.

The anger meridian, we discover, is an insight from yoga and Eastern spirituality. The body is divided into meridians, rather like cross-sections. The anger meridian is the cross section below the lungs. It is where anger and its repression reside.

Ms. Jones, the daughter of novelist James Jones, is a teacher in Stony Brook Southampton’s MFA writing program. She is the author of, among other books, “A Soldier’s Daughter Never Cries” and was instrumental in publishing an uncensored edition of her father’s “From Here to Eternity.”

“The Anger Meridian” is smoothly plotted and compulsively readable. The narrative technique is brilliant and the characters leap off the page, vivid with life. Tenney is a delightful child, an incredibly bright chess wizard who easily defeats the older chess bums who play in the local park. There is a local yoga teacher, who is also a Catholic priest, and it is he who discovered and treated Merryn’s anger meridian, thus relieving her of headaches and TMJ.

Another major character is Dr. Steve Fuller, called “Dr. Handsome,” who treats the ladies of the expat community in more ways than one. One of the delightful subplots concerns Sophie, a pregnant stray dog, adopted by Tenney. “Dr. Handsome” delivers her puppies. I found myself wishing I could adopt her myself.

And then, of course, as a backdrop to all the action, there is San Miguel, nicely rendered.